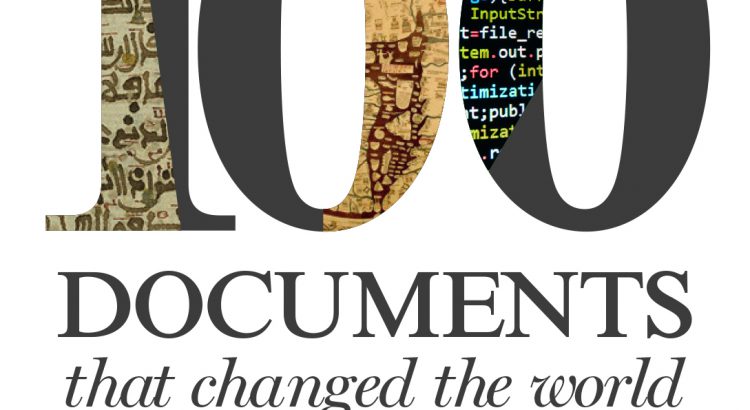 We are surrounded by documents in our everyday lives and, of course, not all documents are in themselves important or worth saving. However, some, be they an ancient scroll of papyrus, a letter, a contract or a 140-character tweet, can have a huge and lasting impact on the world.

Written by Scott Christianson, this beautifully illustrated book examines the fascinating stories behind one hundred documents that have influenced the way we think and act.

Listed in chronological order, the documents discussed here reflect the changing form of documents, from bamboo and carved stones, to finely printed manuscripts, and computer files that collect large amounts of data.

Readers of the book who cannot travel to the institutions where these documents are housed, now have an opportunity to view these items and learn some history behind each document.

Further details of 100 documents that changed the world can be found on the main catalogue, available in ‘Catalogues’ on the Library’s website.

(Photo credit: Batsford & Pavilion, Pavilion Books. Image above shows the title of the book against a white background)