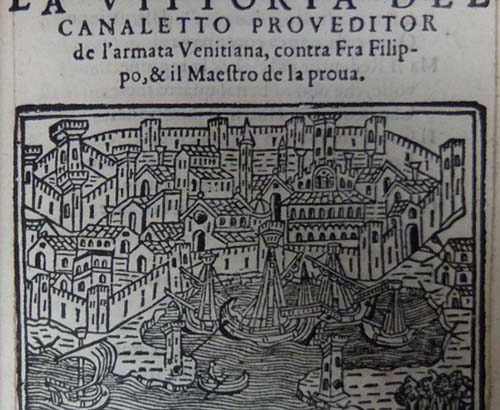 I’m presently cataloguing the important collection of  chapbooks held in the Lauriston Castle Collection. Chapbooks are small paper-covered booklets, usually printed on a single sheet, folded into books of 8, 12, 16 and 24 pages, and often illustrated with crude woodcuts. They were in circulation primarily from the 16th to the 19th centuries, and  sold by travelling pedlars, or “chapmen” for a penny or less on the streets.

There are roughly 5,500 chapbooks in the Lauriston Castle Collection which have been bound into about 500 volumes. Most of the chapbooks that I have been examining were published in Scotland or England in the 18th and early 19th centuries. So, it was extremely interesting to come across bound volumes of Italian chapbooks from the 16th century: shelfmarks L.C. 3050, and L.C.3051.

An ownership label and a manuscript inscription reveals that these chapbooks were formerly owned by Charles Fairfax Murray (1849-1919), an English painter, collector, benefactor and art historian. Murray became the studio assistant of Edward Burne-Jones at the age of 18. He eventually joined the circle of Pre-Raphaelite founder Dante Gabriel Rossetti, and became a friend of William Morris. He worked as artist and glass-painter for Morris, and also illuminated Morris’s manuscripts.

In 1872, Murray he left England for Italy, where he worked as a copyist for John Ruskin in Rome, Siena, Pisa and Venice.  After retiring from painting in 1903 he became an important collector and dealer of early books and illuminated manuscripts.

These early Italian chapbooks collected by Murray originate in Venice and the ones published by Domenico de’ Franceschi (active 1557-1575) are particularly charming with their rustic woodcut illustrations. De Franceschi was born in Brescia and later moved to Venice where he maintained a shop in the Frezzaria near Piazza San Marco. Sometimes his imprint is found in the colophon of his chapbooks, and other times he just incorporates his initials into the bottom section of the woodcut borders of the title pages.

He was a bit of a jack of all trades working as publisher, printer, printmaker, book and art dealer, and woodcut engraver.

De Franceschi was also responsible for publishing Andrea Palladio’s Quattro libri dell’architettura  in 1570. This Four Books of Architecture, is arguably the most important architectural treatise of the Renaissance and one of the most influential books in the history of Western architecture.