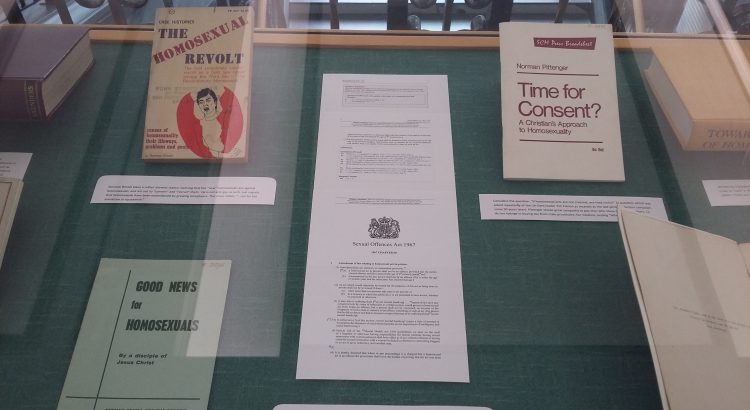 It is 50 years today (27th July) since the passing of the 1967 Sexual Relations Act, which de-criminalised male homosexuality (female homosexuality had never been criminalised).  The findings of the Wolfenden Report[1] were the biggest impetus for the change in the law. Amongst the Library’s huge collections we have many publications dating from the period preceding the legislation, ranging from moves to continue to ban homosexuality; to “cure” it; to understand it; to tolerate it; to accept it. Some of these are featured in a small display (top of the stairs leading to the main reading room), and the various studies included show an over-arching issue: that of conformity to accepted social and sexual behaviours which confirmed the dominant culture in which they operated.

The Act’s ambitions were quite modest – non-criminal homosexual activity was still restricted to consenting adults, in private, at the age of 21 or over, this being the voting age at the time; in addition, homosexuals were expected to show gratitude “…  by comporting themselves quietly… any form of public flaunting would be utterly distasteful… [And] make the sponsors of this bill regret that they had done what they had done.”[2]

Two years after the Wolfenden report was published, Charles Berg addressed its shortcomings, claiming its recommendations would result in the targeting of those under the age of 21. Contemporary scientific studies had shown that teenage boys tended to engage in transient homosexual acts and thus would be criminalised. He goes on “… we tend to lose our reason when it comes to homosexuality, on account of our emotionally overcharged repressed conflicts.”[3]

Religious attitudes to the legislation were mixed: some were opposed but wished to show compassion, others were sympathetic. As early as 1948, Catholic sympathy (due to the sometimes unhappy life of gay men at that time) was tempered with suggestions that homosexuality may merely be a “phase” that, with God’s help and some self-will, could be put aside. “I believe that inversion is one of those strange things that happened when God was not looking.[4]” Others reassured homosexuals that there is still the possibility of redemption for “the vilest of men.”[5]

Other publications claim that homosexual tendencies can be “cured” or that these inclinations can be switched off with the correct therapy. As recently as 2014, the leading body of professional psychiatrists had to emphatically state their conclusion that there is no sound scientific evidence that sexual orientation can be changed.[6]

While there have been great advances since 1967, it is worth remembering that similar legislation was not passed in Scotland until 1980; however, since then, Scotland has often lead the way on LGBTI rights.

[1] Sir John Wolfenden, Report of the Committee on Homosexual Offences and Prostitution, London, 1957.