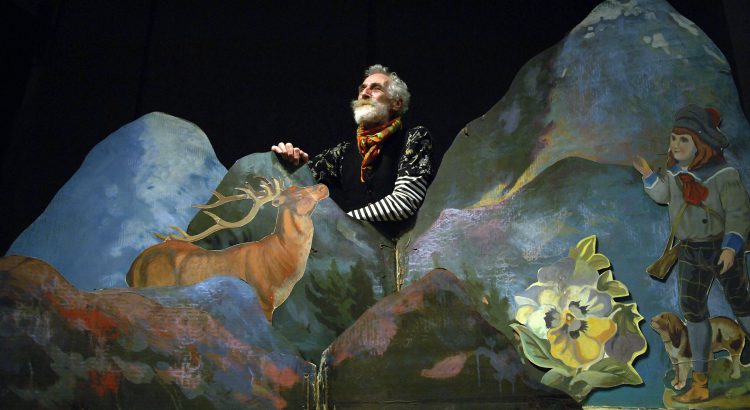 The Cheviot set is a story on many levels. This remarkable stage set was made in 1973 as touring ‘scenery’ for ‘The Cheviot, the Stag and the Black, Black Oil’, the first production of 7:84 (Scotland) Theatre Company. The play – a game-changing modern classic of Scottish theatre – was written by John McGrath in collaboration with the company. The giant pop-up book was likewise a collaborative effort. The company needed some kind of touring set and the story goes that it was John McGrath’s wife and 7:84 co-founder, Elizabeth MacLennan, who came up with the pop-up book idea – she read them to their children.

Another company member, musician Allan Ross, had a hand in building the pop-up stage set and artist, playwright and all-round creative star John Byrne designed and painted the pages. The finished set provided 5 different backdrops to the stage action, and – when closed – fitted neatly on top of the company’s minivan-come-tour-bus.

The tour was a massive success, taking theatre to a whole new audience in village halls and larger venues all over Scotland. So popular that another tour followed later in the same year, as did two week sell-out runs in major Edinburgh and Glasgow theatres. The play also toured to Dublin and Belgium, and then came the TV version in 1974. The set did an awful lot of popping-up, and the hauling on-and-off the van at every venue, and the weather extremes to which roof-top travel exposed it – all took their toll. Many running repairs were done on the road, mainly by Allan Ross who kept the set in some kind of working order with string, duct tape and anything else that came to hand.

Thereafter, the huge, dilapidated pop-up book seems to have been stored at various locations around the Highlands, and by the late 2000s had made its way to Dunbeath Heritage Centre in Caithness. Too big and broken-down to display, it had been manoeuvred into a small upstairs room. The fact that such an unwieldy thing was always kept somewhere indicates that these various individuals and institutions (whoever and wherever they were) recognised that this was an important and unique cultural artefact that needed keeping. The one person who probably always knew of its whereabouts was the late Elizabeth MacLennan. And when she contacted the Library in 2008 suggesting that we should buy the set as it formed part of the 7:84 (Scotland) archive – which we had owned for years – we were open to persuasion. As a colleague said at the time, ‘After all, it is a book’.

In 2009 a Library conservator and two other strong men made the trip to Caithness to collect the set (they still go on about their struggle to get the book back down those Dunbeath stairs).  This time it was travelling inside the van.  Shortly after the set arrived in the Library, Allan Ross came in to be reunited with his old friend and adversary after a gap of some 35 years, and to kindly advise us on the repair job that was about to start.

The conservation work was contracted out to the book-binder John Allison (after all, it is a book) and he and his company did a great job. The book doesn’t pop up any more, but it doesn’t need to. The set was ready to be the centre-piece of our Curtain Up theatre exhibition of 2009-2010. A particularly happy occasion was the Cheviot reunion in January 2010 when many of the original company got together for a panel discussion, and were re-acquainted with the set. It has been out on loan once since the exhibition, and last year we made a short film showing the various openings.

The Cheviot stage set must be the biggest item in the Library’s collections – after all, it is a book.