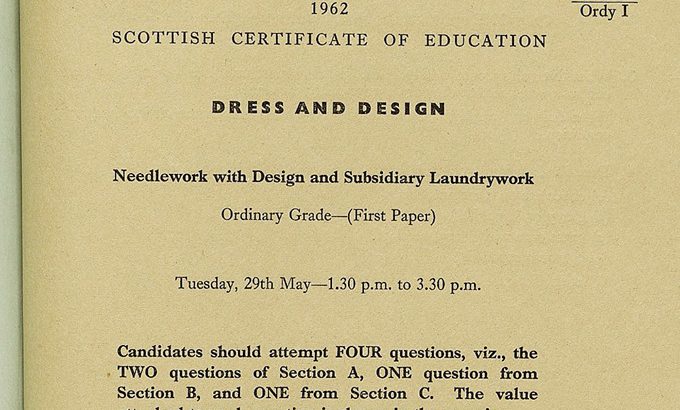 As many young people across Scotland await their exam results the National Library of Scotland is giving you an opportunity to look at the Scottish schools exam papers of bygone years.

The digitised exam papers for the School Leavers Certificate from 1889-1961 and the Scottish Certificate of Education 1962-63 and these are now available to view on our digital gallery. The remaining years, up to 2005  are being digitised and will appear on the digital gallery in due course.

The very earliest digitised papers 1889-1895 are extremely interesting as they include reports by Professor J Eggeling and Mr Henry Craik.

Craik was born in Glasgow in 1846. In 1885, when Scotland got an independent Committee of Council on Education known as the Scotch Education Department, Craik was chosen as permanent secretary. During his 19 years in the post he played a dominant part in moulding the education policy in Scotland. Craik’s most notable achievement was the development of secondary education.  He also introduced, in 1886, a regular system of inspection of secondary schools by HM Inspectors and followed this in 1888 by the introduction of the leaving certificate examination[i]

These early reports (1889-95) list the names of the schools taking the certificate as well as giving statistics on how many candidates sat the exams, how many papers were taken and how many passes were gained.

We then have a gap in our collection for several years and then the  digitised collection begins again in earnest in 1909 where the subjects that you could study were firmly focused on languages – English, Latin, Greek, French, German, Spanish, Gaelic as well as Mathematics, Book keeping and Commercial Arithmetic.

1961 saw the introduction of  the Scottish Certificate of Education for Ordinary Grade (O-Grade) and Higher Grade (‘Higher’) which became the basic entry qualifications for university study. It is proposed that our digitised collection of exam papers can be developed into a much larger partnership project with University College London who have digitised the English School Exam papers.

The University are particularly interested in the STEM (Science Technology, Engineering and Maths) subjects and are developing a database which will allow interrogation and comparisons to be made of both the English and Scottish papers for further research in that area.