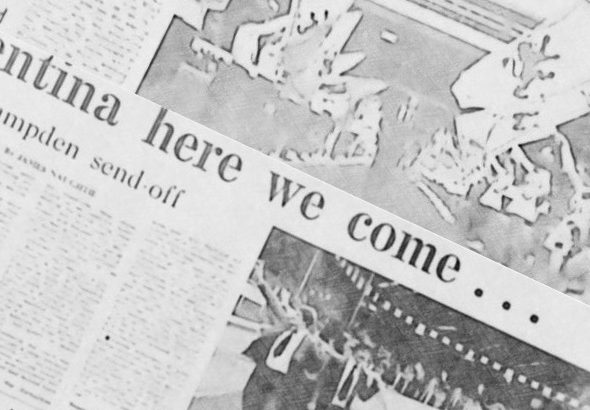 From the moment Kenny Dalglish’s head met Martin Buchan’s cross to score the second in Scotland’s last World Cup qualifier at Anfield in October 1977 there was fervent optimism that the national team was going to do something special in the coming World Cup in Argentina.

Unremarkable results in the British Home Championship did nothing to dampen spirits; draws with Wales and Northern Ireland and the calamity of a 1-0 defeat at Hampden to England were not the performances of world-beaters. But none of the other home nations had qualified so Scotland were already winners, and there was the lure of a greater prize ahead.

‘Ally’s Tartan Army’ had been in the hit-parade in March while Rod Stewart and the Scottish World Cup Squad official song ‘Ole ola’ was in the shops. Morecambe and Wise, draped in tartanry, were advertising lager. Ally MacLeod, the genial Scotland manager, enthusiastically predicted good things, and he was entirely convincing; ‘It’s looking good’ chirped the Scotsman on 26th March.

The previous day, 25th March, 1978, Scottish football fever reached its peak when 30,000 people turned up at Hampden for the official World Cup send off – 50p to get in, no football, just a parade, flag waving and players individually introduced to the crowd; a cheerleader ‘guard of honour’ for the manager in specially designed SFA blazer; a circuit of the ground in an open-topped bus. The ‘triumph’ before the victory. 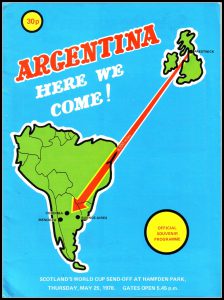 And there was a programme [shelf mark PB4.218.39/5] with the usual content for the time; cigarette and whisky ads; luxury colour photographs of players in tammies, and hair to be proud of, amongst sparse but jovial commentary. All for 30p. ‘Argentina here we come!’

Forty years ago. It was brilliant – and we had great players.