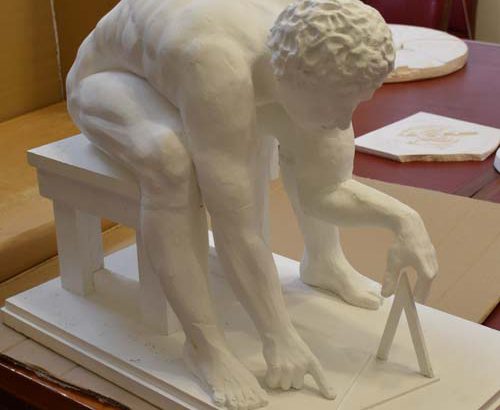 One would not automatically associate the National Library of Scotland with art collections. In fact, the Library has acquired a substantial number of  paintings, sculptures, busts and art prints through the centuries and continues to add to these collections. In addition to being a Curator of Rare Books, one of my other hats is Art Curator and I am involved in the on-going cataloguing, digitization, research and publicity of these collections. I’ve recently been examining the National Library of Scotland’s collection of nineteen maquettes by the sculptor Eduardo Paolozzi (1824-2005) in preparation for a public viewing on July 25, 2017. In 1995, Paolozzi gifted these works to the Library partly as gesture of goodwill towards his hometown, and partly out of practical considerations: namely, the sheer quantity of materials produced or acquired in his studios through the decades made it impossible to walk from one side of the rooms to the other. Other institutions that received works from his collections at the time included the University of St. Andrews, the Victoria & Albert Museum, the Tate, and the Scottish National Gallery of Modern Art. The standout object in the National Library’s grouping is a maquette of Isaac Newton constructed out of Plaster of Paris and wood. It is one of a number of studies for Paolozzi’s enormous completed bronze sculpture which was installed in the courtyard of the British Library in 1995.

The maquette is inspired by  William Blake’s  colour print entitled: Newton, Personification of Man Limited by Reason. The choice of Blake’s depiction of Isaac Newton as the model for the sculpture caused some controversy as Blake was known to be antagonistic towards Newtonian rationalism. Blake went so far as to refer to Newton, John Locke and Francis Bacon as “the three great teachers of atheism, or Satan’s Doctrine”.  In fact, Newton  was not an atheist at all.

The engraving features a naked compass-fixated Newton sitting on a ledge with his back towards a mottled rock face. Blake depicts Newton as a misguided individual literally turning his back on nature in order to gaze fixedly at sterile geometric diagrams. Such is Blake’s apparent contempt, that Newton’s pose and the shape of the rock that he sits upon makes it look as if he is going to the toilet. Nevertheless, Paolozzi was inspired by both these geniuses– one representing the highest ideals of science and the other representing poetry, art and the imagination– and decided that this synthesis would be perfect for the new British Library.