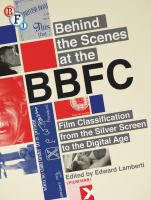 This book, published in the BBFC’s centenary year, traces the fascinating history of film classification, censorship and controversy in Britain, and marks an unparalleled collaboration between the BBFC and leading film critics, historians and cultural commentators.

The writers, given unprecedented access to the BBFC’s archives, chart the organisation’s history alongside the cultural, social and political forces that have helped shape it.

Together they explore shifting public attitudes towards cinema’s portrayal of sex and drugs, horror and violence; the different perspectives of the BBFC’s successive leaders; the impact of controversial decisions, and the ever-changing nature of film distribution and exhibition.

The book also features unique case studies, written by BBFC staff, focusing on significant films that have provoked debate and controversy both within the BBFC and more widely – Battleship Potemkin, A Clockwork Orange, Indiana Jones and the Temple of Doom, and many more.

Edited by Edward Lamberti, who works for the BBFC and therefore has a great insight into the running of the organisation, Behind the Scenes at the BBFC: Film Classification from the Silver Screen to the Digital Age gives an entertaining and fascinating insight into changing attitudes to what counts as offensive, shocking or harmful over the last century, and shows how the work of the BBFC shapes what we see on screen.

Further details of Behind the scenes at the BBFC can be found on the main catalogue, available in ‘Catalogues’ on the Library’s website.

(Photo credit: Palgrave Macmillan. Image shows the front cover of the book with the title and editors name against a white, red and blue background)