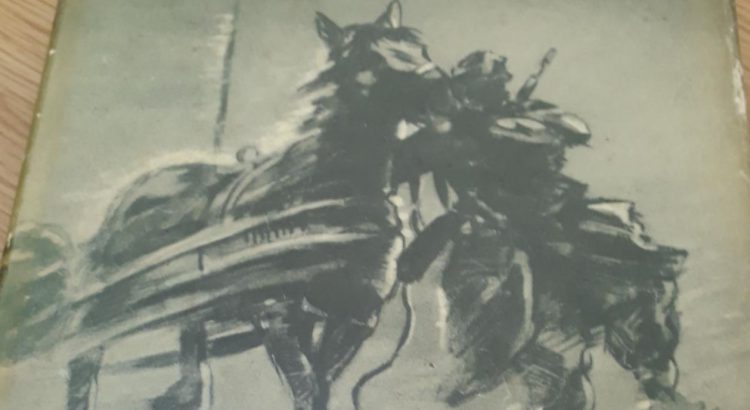 A recent donation of several World War II related books contained ‘Gekämpft, gesiegt, geschlagen’ written by Lothar Rendulić. It describes German military operations in the Finnmark/Troms region, close to the Russian border. The book is inscribed by Rendulić: ‘Mr. Liddell-Hart with my best greeting. Rendulic, Seewalcher am Allersee, November 1952.’ (Sir Basil Liddell-Hart was a British military historian and theorist who generated a reputation for admiring and influencing German martial policy). But it wasn’t the military operations that interested me so much; it was that the author was once Generaloberst Lothar Rendulić, Commander of the 2nd Panzer Army in Yugoslavia 1943-44, and from 1944, Commander of the 20th Mountain Army and all German troops stationed in Finland and Norway – and he was tried at the war crimes court at Nuremberg.
He was Austrian by birth, had served on the Eastern Front and was wounded in 1914, before joining the Nazi party in 1932 and serving in Russia in 1941-42. By 1944 he had taken command of the 20th Mountain Army in Finland and was tasked with defending the German line against the Russians (the Germans had moved into Finland in 1941 as part of Operation Barbarossa). But in 1944, when the Finns had made peace with Russia against their former German allies, he was ordered to remove all 230,000 German troops across the border into Norway before the Finns, along with the Russians, turned on them. This huge undertaking was known as Operation Nordlicht.
Before the retreat began, Hitler ordered the implementation of a “scorched earth” policy, which required that anything that may be of use to the enemy be destroyed. All buildings – including hospitals, houses, farms, schools, churches, factories – were razed to the ground. Infrastructure such as harbours (including all ships and boats), bridges, lighthouses, telegraph poles and telephone exchanges were similarly destroyed. 75,000 people were forcibly removed and all domestic animals were slaughtered. Generaloberst Jodl, Chief of the Operations Staff of the Armed Forces High Command, stated that the Norwegians would be grateful to them for having ‘saved them from Bolshevism’, and he compared the Soviet forces’ operations with, as he put it, the Germans’ ‘humane evacuation and destruction of homes.’ The Germans had been based in Norway since their invasion in 1940 and existed alongside Norwegians, with some billeted in their homes. Relationships were formed and not everyone regarded them as the enemy. The Germans had stockpiled huge military supplies, as well as fuel depots, which came under continuous attack by the Russians. Norwegian civilians witnessed all this, as well as the harsh treatment of Russian prisoners-of-war at the hands of the Germans. Despite being in the firing line of Russian attacks on the German troops, some local residents refused to be evacuated and hid in caves and on islands, but most were transported out by ship. One notorious incident was the case of the cargo ship Karl Arp, which was crammed with 1800 refugees. An outbreak of dysentery on board left 29 people dead by the time it reached Narvik.

At the Nuremberg trials in 1948, charges against Rendulić included alleged crimes in the former Yugoslavia: the taking of hostages, reprisal killings, murder and ill-treatment of prisoners-of-war. In the Finnmark/Troms case, he was accused of implementing a scorched earth policy. Rendulić contested this charge, saying that it was his belief that the approaching Russian army would annihilate his forces; he also used the defence of “superior orders” given by General Jodl, who had told him: ‘This is not the place for sympathy for the civilian population’.
The judges acquitted Rendulić of this charge through his defence of military necessity, but he was found guilty of the other charges and sentenced to 20 years in prison.

These later Nuremberg trials (1947-48) differed from the first tranche in that they were not administered by an international court system, but by the United States. By the time General Lucius Clay stepped down as U.S. High Commissioner for Germany in 1949, his successor, John McCloy, faced growing calls for clemency from both Germans and Americans.  These calls were from various viewpoints, including the legality of the proceedings in relation to the U.S. justice system, with one critic describing the trials as a “lynching party”.  German objections tended to be based on the premise that the crimes were ‘committed in the confusion and economic distress [of war].’

John McCloy was a banker, diplomat, presidential advisor and staunch anti-communist. He became High Commissioner at a time when the beginning of the Cold War convinced the U.S. that it needed Germany as a Western buffer. In this political climate, it was perhaps unsurprising that McCloy was disposed to think positively about the new Federal Republic of Germany’s calls for a general amnesty for the Nuremberg defendants.  Hence McCloy’s establishment of the Advisory Board on Clemency for War Criminals in 1950, which examined the reduction of sentences for good conduct; it commuted 7 out of 15 death sentences and reduced 77 out of 90 life sentences. McCloy also restored the confiscated wealth of several high-ranking Nazis, including Alfried Krupp, Hitler’s Minister of the War Economy. Krupp had used concentration camp forced labour in his factories, including Auschwitz, working to death an estimated 70,000 people. Several ex-Nazis were also recruited as anti-communist spies. Most controversially, McCloy was involved in the escape from justice of the infamous Gestapo chief, Klaus Barbie, who was responsible for the murder and torture of men, women, as well as hundreds of French resistance fighters. Generaloberst Lothar Rendulić benefited from McCloy’s relaxation of policy; his sentence was reduced to 10 years, and then he was released early in 1951. He returned home to Austria, writing his military books and articles, and died peacefully in 1971.

This book and its history highlighted for me the issues around conflict which are generally forgotten in the accepted narrative; the Nuremberg trials are often taken at face value as justice for the horrors and atrocities of World War II, and yet political expediency came into play almost immediately after the war ended.  As one commentator put it at the time: ‘Wittingly or not, Mr. McCloy has dealt a blow to the principles of international law and concepts of humanity for which we fought the war.’ 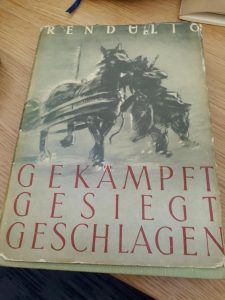