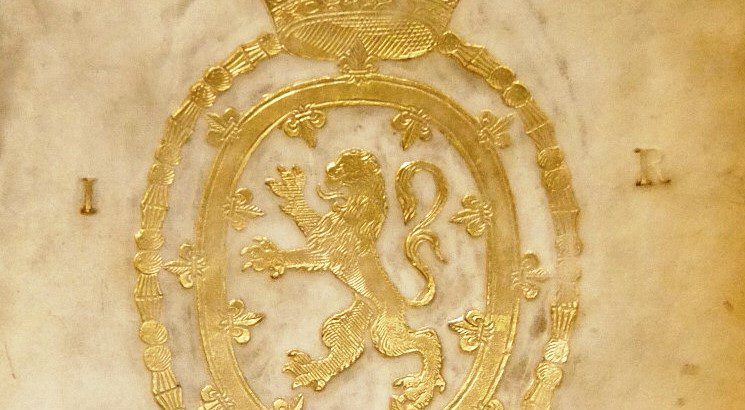 The Library has recently acquired a book bound in vellum for King James VI, probably in the 1580s. This is one of a small group of books that are known to exist in bindings that were produced for James before the union of the crowns in 1603 and is a significant purchase. Of the nine examples identified, two are already held by the National Library, and there is only one other held in Scotland at the Royal College of Physicians of Edinburgh.

The significant feature of the binding is the finely gilt stamped royal arms of Scotland which, unlike the other two examples held by the Library, is flanked by the initials I and R with a 6 above. These represent Iacobus Rex 6, the Latin form of King James 6. The binding is also complete in its original form: the Library’s other two examples having had their spines repaired with loss of the original leather.

From contemporary documents (printed in ‘The Library of Mary Queen of Scots, and of King James the Sixth’ in The Miscellany of the Maitland Club, I, 1840) we know that Edinburgh binder John Gibson was appointed bookbinder to the King on 29 July 1581 and continued in this role until his death on 26 December 1600. Among these documents is a receipt signed by the King listing 59 books bound by Gibson but none of these have been located. There follows further receipts for binding but, unfortunately, without the inclusion of the titles of the books bound.

The book itself is an edition of Lucretius published in Paris in 1570. Titus Lucretius Carus was a first-century BC Roman poet and philosopher whose only known work is De rerum natura (On the nature of things), a philosophical poem on Epicureanism: the pursuit of happiness through an understanding of the world, limiting one’s desires and living modestly.

James VI grew up under the tutorship of the eminent humanist George Buchanan and surrounded by the works of ancient Greece and Rome found in the books provided by his tutors. These, added to those owned by his mother, provided a substantial library. One of the National Library’s other examples of this binding appears on a 1569 edition of the works of the ancient Greek writer Xenophon (c. 430-354 BC) printed in Basel. It bears the same royal arms of Scotland stamp but with a badge of St Andrew beneath. The book includes the Cyropaedia in which Xenophon describes the qualities a good king should possess.

Both the Lucretius and the Xenophon would have provided suitable reflection for a scholarly-minded King. The remaining example of the binding houses a work of history: a Frankfurt, 1566 edition of a chronological history of Germany and includes the gilt stamped arms of a later owner: that of Lincoln’s Inn, one of the four Inns of Court of the English Bar and where a library has existed since 1422.