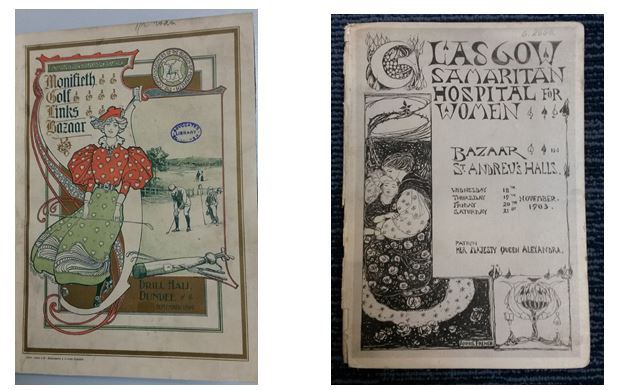 The word ‘bazaar’ was first used to describe a sale of work in 1813 in London and spread throughout the developed world in the 19th century. By the 1870s they were huge extravaganzas lasting several days, with entertainments, such as puppet shows, theatrical performances and displays of novelties such as electric light, early moving pictures, and motor cars.  At their peak between 1880 and 1910 there were probably over 300 bazaars a year in Scotland. Extravagant bazaars fell out of fashion with the start of World War I. Local businesses sponsored advertisements in bazaar books, and some supplied materials, such as flour for baking competitions. At one bazaar Sunlight Soap provided soap for washing competitions where men had to wash clothes. Meanwhile women had to whistle or hammer in nails. Bazaars raised funds for good causes, such as children’s charities, or for the sick. Many public buildings were funded by subscription, but if there was a shortfall, bazaars were held to pay off the debt. About two thirds were for church buildings and halls of various kinds (town, village, drill, masonic, church). There were also bazaars for bridges, harbours, libraries, music and students’ associations. Others were held to raise funds for the work of organisations, such as the Highland Associations, or political parties, and of course many were for sports club funds, including golf, tennis, bowling, curling, rugby, cricket, cycling. BOOKS OF THE BAZAAR

Many bazaars were accompanied by a bazaar book. Some were simply programmes, but others were specially prepared books which were sold to raise funds.  Content varied and often included local or church history,  poems, recipes, or quotations. Bazaars were frequently the province of women and contributed to their emancipation. They enabled middle and upper class women to do useful work outside the home, which was socially acceptable because their purpose was philanthropic. They were the organisers, made goods and ‘fancy work’ to sell, and staffed the stalls. Their photographs appear in a few of the larger bazaar books. Find out more at the forthcoming talk:

Thursday 23 March, 6pm, in the National Library of Scotland

The titles pictured are on display in the National Library of Scotland until the end of March. If you would like further information on any of them, please contact  Jennifer Giles, Curator (Scottish Communities & Organisations) 0131-623-3910 or email j.giles@nls.uk