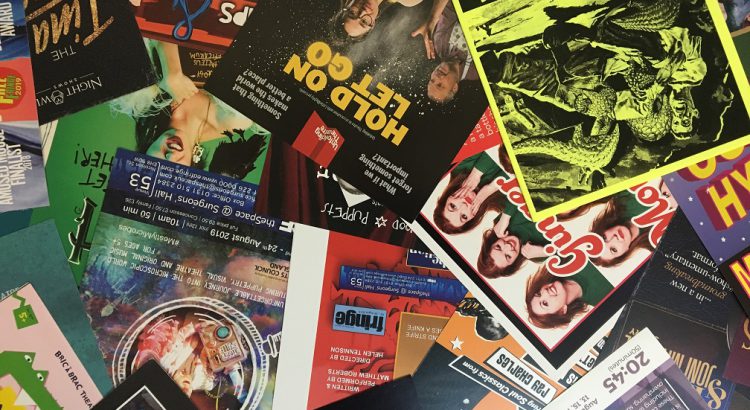 Edinburgh’s Festivals are drawing to a close for another year – the annual revels and mayhem, crowded streets, with entertainments of all kinds – from real theatrical efforts to someone on a pole dressed as Yoda (or it might be Dobby, nobody can be really sure) – exploding fireworks above the castle every night, and low flying military jets. And flyering, lots and lots of flyering.

Flyering is definitely a ‘thing’ in Edinburgh during August. Flyering gets mentioned in shows when comedians discuss their Edinburgh experience; people are employed by the larger venues specifically to distribute flyers; and fifteen minutes before smaller shows artists try to rustle up some punters with the aid of a pile of flyers and an increasing tone of desperation.

Flyers for Edinburgh Festival Fringe shows are almost the epitome of ephemera – their practical use is limited to the run of the show, a maximum of three-and-a-half weeks. By the end of the Festival or duration of the run flyers are completely obsolete. Yet they record the existence of some event and that they themselves exist makes the artefact of interest to the Library – a published ‘work’ recording an event in Scotland.

And that’s why we try to collect them. There are now over four thousand shows on the Fringe. While not everyone produces a piece of literature to advertise their act we do try to collect a representative sample of the material that does exist. It’s not simple, as the venues do not generally produce their own publicity material leaving the logistics of production and distribution to the artists themselves – often just one person. The most straightforward way of collecting flyers is to turn up at the venues and pick up whatever is there and nearly always accept the offer of a flyer in the street (causing some confusion in the flyering fold as it is most unusual that someone asks for the item they normally can’t give away). An additional complication is that not all acts stay for the whole Festival or turn up later so some venues need to be visited more than once. With more than three hundred venues listed in the Fringe programme, that’s a lot of visiting.

Luckily Edinburgh is a small city with many of the venues, from grand theatres and halls, to less than salubrious and foul smelling boozers, clustered in certain areas – around the Cowgate and High Street; beside the University; in the New Town. The crowded and narrow streets mean that the quickest way of getting around is on foot.

The Library has ephemera relating to the Fringe dating back to the 1950s – when the ‘fringe’ became capitalised and the Edinburgh Festival Fringe Society was formed. Before that theatre groups just turned up when the Festival was on and became ‘unofficial’ or ‘other events’. The Festival is now the largest arts event in the world. While there are a few items for each of the earlier years, the collections of material from the 1980s onward has similarly become huge – we collect a couple of thousand items each year. Among the endless piles of ‘stuff’ the need to stand out is met by some acts diverging from the standard A5 flyer, and they issue a sticker, a flyer shaped like a fish or a rainbow, or a beer mat. My favourite is a piece of slate with details of the show scratched on the surface – eminently different, impractical, and just a bit daft.