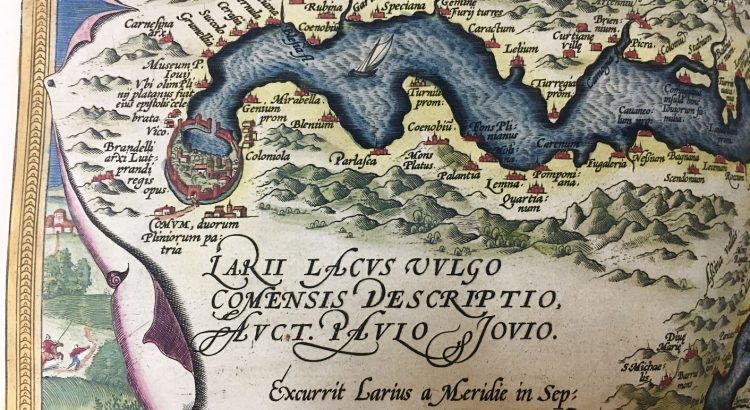 Blog written by Rosie Seidel, MSc in Book History and Material Culture student at the University of Edinburgh.

In an effort to increase the discoverability of and access to maps in the collections, I have been working to index and identify editions of 15th century Ptolemaic and Ortelian atlases.

Though I have only worked with four atlases during my placement at the library, I have described and indexed well over 285 maps found within their pages. The atlases I have worked with include two copies of Ptolemy’s ‘Geographiae Libri Octo’, 1584, ‘Epitome Theatri Ortelius’, 1589, and Ortelius’ ‘Theatrum Orbis Terrarum’, 4th edition, 1592.

Though I am a trained rare book and special collections librarian, I have not had much opportunity to work with atlases. This was a new and exciting prospect for me. In the course of my work, I have gained a wealth of knowledge about the history of mapping and world geography, among other things. The atlases are filled with decorative details, stories, and scenes, which has led me to conduct research in order to properly describe them. Through this practice, I learned a great deal about the characteristics of different regions, biblical and religious history, the history and identification of European nobility, and the history of colonialism.

I was fortunate to be able to choose what kind of atlases I wanted to work with when I began my placement. I am primarily interested in art history and am fascinated by monsters, so I was directed to atlases that contain exactly what I was looking for. Working with them has been a truly delightful experience. Every page turned is an opportunity for discovery and wonder. Two of the atlases, one copy of the ‘Geographiae Libri Octo’, (see https://maps.nls.uk/atlas/ptolemy/1584/ ) and ‘Theatrum Orbis Terrarum’, were especially exciting because they were hand-coloured at some point. The pigments of the paints used are vibrant and attract the eye, making the subject matter even more exciting and exotic. The maps are beautiful examples of late 16th century printing, and their details are further enhanced by the inclusion of colour to heighten the viewing experience. The colour also adds additional dimension, and serves to make features and textures stand out.

Reflecting on the differences between the Ptolemaic and Ortelian atlases, I wonder about their use. Each atlas tells a unique story. Between the two copies of the ‘Geographiae Libri Octo’, one has been coloured – as previously mentioned – and one has not. I speculate that the copy that is hand-coloured was most likely used as a decorative object or status symbol, whereas the copy that was left in its original printed state was used more practically. Its margins are full of annotations in a single hand, indicating that it was most likely a part of a personal working library.

Despite their differences, the two do share striking similarities. For example, the maps of Salzburg and Lake Como in both atlases are presented in visually intriguing ways. Within their frame upon the page, each of the maps is portrayed as another nearly three-dimensional material object – nailed down to the frame, with edges curling up to reveal scenes underneath. Each atlas is full of beautiful details, but clearly neither was intended to be a practical object. The ‘Epitome Theatri Ortelius’ is much too small and overfilled with decorative features to easily make out any geographic details, and the ‘Theatrum Orbis Terrarum’ is much too large to be anything other than a visual feast.

It has been a fascinating experience to explore 16th century understandings and interpretations of the world, and in such a visually stimulating manner. There are so many magnificent maps that I am thankful I got to work with. It would take another several blog posts and a large gallery of images to do them all justice! I would encourage anyone interested in the history of cartography or visual culture to explore these maps – they reveal a world full of wonder on and off every page.