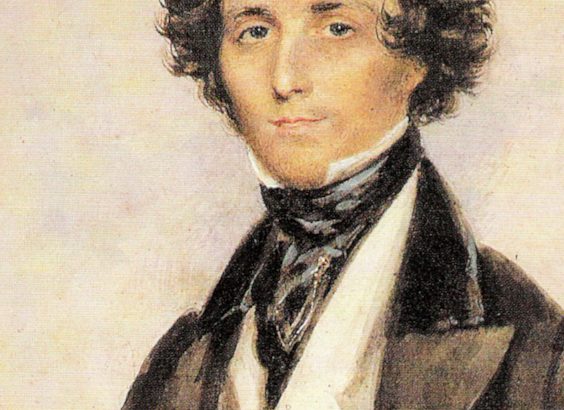 In the 19th century many composers, including Felix Mendelssohn-Bartholdy (1809-1847), were inspired by Scottish literature to write music based on Scottish themes. The main influences were Ossian, Robert Burns and Sir Walter Scott. Most major composers did not visit Scotland in person and so the inspiration remained cultural. However, Mendelssohn was one of the few major composers who actually visited Scotland.

In 1829 he travelled to Britain as part of his ‘grand tour’, an educational tour that well-to-do young people undertook in the 19th century to widen their cultural experience.

Mendelssohn spent several months in Britain meeting leading musicians and composers of the day, visiting Sir Walter Scott at Abbotsford, performing and conducting concerts and studying musical sources at the British Museum. In July 1829 Mendelssohn travelled to Scotland with his friend Carl Klingemann (1798-1862) for a walking tour. During his Scottish travels he found direct inspiration for two ‘Scottish’ compositions: his third symphony which became known as the ‘Scottish’ and his Hebrides overture, also known as the Fingal’s Cave overture.
The Hebrides

In August Mendelssohn and his friend Klingemann travelled to Oban, and onto the Hebridean islands of Mull, Iona and Staffa. In a joint letter Mendelssohn writes ‘On one of the Hebrides 7 August, 1829. In order to make you understand how extraordinarily the Hebrides have affected me, the following came into my mind there.’ This passage is followed by the famous sketch of the opening theme of the overture. On 8 August 1829 Mendelssohn and Klingemann went on the boat trip to Iona and Staffa. Mendelssohn was terribly sea-sick and he writes from Glasgow on 11 August 1829: “How much lies betwixt my last letter and this! The most fearful sickness, Staffa, scenery, travels, people – Klingemann has described it all…what I can best tell you is contained in the above music.”

For some time it was believed that Mendelssohn was inspired by the sight of Fingal’s Cave on Staffa to write the opening theme but given his sea-sickness this is unlikely. While the letter of 7 August may possibly refer to their travels on 7 August rather than having been written that day the theme appears in context with that date ahead of the visit to Staffa. It is more likely that the theme came to him on Mull. One of the reasons how the story about Fingal’s Cave came about is the fact that the overture’s conception is mentioned in a report on a meeting with Mendelssohn by contemporary composer Ferdinand Hiller (1811-1885) discussing the Hebrides overture when the two met in Paris:

The letter written on a Hebridean island dated 7 August doesn’t actually specify which island and it is most likely that it would have been written on Mull i.e. the day before the visit to Staffa and Iona on 8 August. Hiller’s recollection as reported in this edition shows several inconsistencies in that 7 August 1829 was a Friday not a Sunday and there is a discrepancy between the bar numbers of the sketch and incipit in the letters he mentions.

The sketch in the letter of 7 August contains 21 bars not 10-12 and the later letter where the theme appears as a musical incipit contains 3 bars instead of 2.
Interestingly the naming of the overture as Fingal’s Cave is reported to have come from his music publisher years later.

Mendelssohn undertook several years to complete both ‘Scottish’ pieces. He completed four versions of the overture between 1830 and 1832. The symphony he completed as late as 1842.