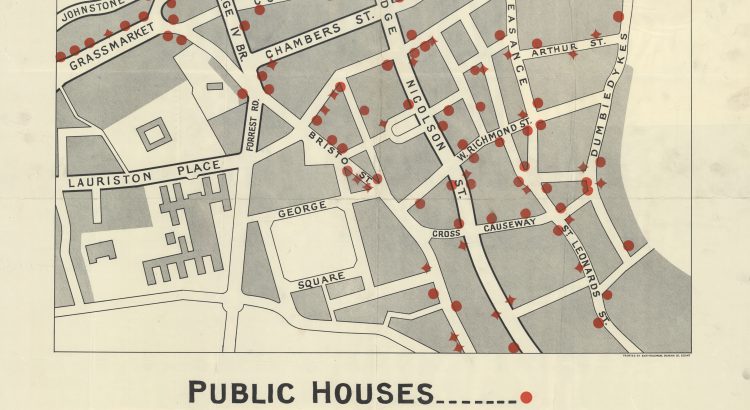 September’s Map of the Month

I am often asked what my favourite map is. It isn’t really a map in the conventional way, rather a poster which illustrates how little things have changed since its publication in 1923. September seems an appropriate month to highlight this item. The city is getting back to normal after a festival filled August, and having a “rest” before the winter festivities start. The issue highlighted in the map is the number of public houses (pubs) and licensed grocers (off-licences) in and around the Old Town. The poster was published by the Edinburgh Citizens’ “No Licence” Council.

Seeing the dots marking public pubs on Cockburn Street reminded me of one of my aunts saying she worked in a temperance hotel during her university holidays in Cockburn Street during the 1950s. The extract from below from the 1893 Edinburgh Town Plan shows 3 Temperance Hotels very close to each other near the Tron Kirk in Edinburgh. There were more on Cockburn Street.

There is a small leaflet in the Library’s collections for Armstrong’s Temperance Hotel at 244 Buchanan Street in Glasgow, shelfmark PB5.208.668/19. The original building has been knocked down, and is now a branch of Sainsburys.

I then remembered being told by my Dumfriesshire relatives about the area between Carlisle and Annan being under state control until into the 1950s. This dated back to HM Factory Gretna being built in 1915. HM Factory Gretna was the largest explosives factory in the world when production began in April 1916. The 1,100 acre site straddled the Scotland-England border, stretching from Longtown in Cumbria to Dornock in Dumfriesshire, and had its own 25 mile narrow-gauge railway criss-crossing the site. The Devil’s Porridge Museum ( https://www.devilsporridge.org.uk/ ) at Eastriggs tells the story of the explosives factory and its thousands of workers brought from all over the Commonwealth.

The Defence of the Realm Act 1914 included strict control of the sale of alcohol in pubs, hotels and off-licences. Opening hours were restricted to “Luncheon 12:00-14:40”, and “Supper 18:30-22.30”. The legislation relating to the sale of alcohol (State Management System) was not completely dismantled until the mid 1970s. The system was also referred to as the “Carlisle Experiment” due to the largest area the legislation covered. Two other areas, near the Royal Small Arms Factory at Enfield Lock in London, and near the Cromarty Naval Base at Invergordon had similar control measures applied.

The map extract below gives an example of how Ordnance Survey did not show details of buildings where this was considered against the national interest. Examples can include military dockyards, airfields and munitions factories. This excerpt shows where the Royal Small Arms Factory was at Enfield Lock in London. The factory itself isn’t shown, but the ‘Ordnance Arms’ pub is.

The key aim of the State Management Scheme was to keep the munitions workers sober by restricting alcohol supply. By mid-September 1916 there had a been a sharp decrease in the number of drunk and disorderly arrests, and by May 1917 this number had fallen to below the level prior to HM Factory Gretna being built. Pubs that were taken over by the state were encouraged to offer food, as well as hot drinks. The buying of rounds of drinks, or “treating” was banned between 1916 and 1919. If only this was still in place, it would make going out in a group a lot easier!

An example of a pub offering more than just alcohol was the purpose built ‘Gracie’s Banking’ in Annan. This was built in 1916 in order to ease congestion at the town’s other pubs. The control measures were stricter at Gracie’s Banking meaning that no spirits were sold. Features of the building were:

7 State Controlled pubs were re-modelled to create a more open space, while a further 15 were demolished and rebuilt to state architect Harry Redfern’s design for a “model pub”. Proper tables and chairs were installed to create a more welcoming atmosphere, as well as to discourage “vertical drinking”. Some of these pubs were designated “food houses” where state-made pies were served. Others, like ‘Gracie’s Banking’, had a fuller food menu and an area that could be used as a tearoom. ‘Gracie’s Banking’ was designed by Harry Redfern’s assistant, George Walton.

The map above shows the area around ‘Gracie’s Banking’ in 1929. I know ‘Gracie’s Banking’ as ‘The Bruce’. By this time the cinema part had been demolished, and the bowling green had been moved. On a Saturday the area in front of the building hosted market stalls, with a car park to one side.

Until the late 1960s no hotel in Gretna held a full licence. Under State Control they were only allowed a table licence – you could only drink alcohol if you were having a meal. One way to circumvent the restrictions on alcohol sales was to be a member of a social club, such as the local fishing club, or golf club, etc. The licensing laws were not as strictly supervised in these establishments.

In 1970 Hector Monro, the then MP for Dumfriesshire raised the issue of some State Control measures still being in place on behalf of one his constituents, who was the owner of the Corner House Hotel. This was a privately owned hotel with 50 bedrooms. This was more bedrooms than all 5 of the State Control hotels in the area put together. The owner had successfully applied to the local licensing board for a full licence only to have the decision vetoed by the Secretary of State.

As I say to younger relative maps bring social history alive, and they are far more interesting than I found geography at secondary school. This was certainly the case when I started researching the background to “my” ‘Edinburgh Citizens’ map.