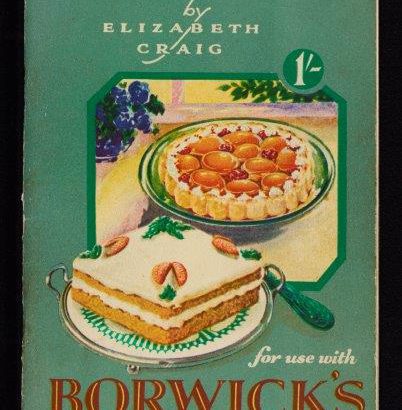 “5 Ingredients” by Jamie Oliver was the best-selling book in Britain last year selling over 700,000 copies and confirming the popularity of the celebrity chef.  We perhaps think of celebrity chefs as a fairly recent phenomenon dating back to the 1950s with Fanny Craddock and later Delia Smith, Ken Hom and Keith Floyd leading the way for Nigella Lawson, Jamie Oliver and Gordon Ramsay. One of the first celebrity chefs though was a Scot, Elizabeth Craig who started her career in the 1920s.

Elizabeth Craig was born in Linlithgowshire in 1883 and brought up in Kirriemuir. A daughter of the manse, her father was a minister of The Free Church of Scotland. Elizabeth Craig trained as a journalist in Dundee before moving to London where she started to write a cookery column for the Daily Express in 1920. For the next sixty years she was a prolific writer of cookery books and columns published both here and in the United States. In the 1930s she even had that prerequisite of the celebrity chef her own signature range of cooking dishes designed by her and produced by the Phoenix Glassware Company.

During her sixty year career Craig covered and often influenced trends in cooking from the lean years of rationing after World War I to the consumer orientated 1980s. Craig was a glamorous society figure in the 1920s so it is fitting that her first successful book was “The Stage Favourites’ Cook Book” published in 1923 and featuring dishes recommended by stars of London’s West End theatres. Here you can find a recipe for Adelphi soufflé by Sybil Thorndike and date torte by Elsa Lanchester. In the 1930s she published “Wine in the Kitchen” and several general cookery books with an emphasis on economy. “Gardening with Elizabeth Craig” published in 1940 told you how to grow your own just as wartime food rationing began to bite.

Elizabeth David’s “A Book of Mediterranean Food” was published in 1950 and introduced the British to exotic and then almost unattainable ingredients like basil, garlic and olive oil. Craig also played her part in introducing the British to foreign cuisine with a book on Mediterranean cookery in 1956 and “Scandinavian Cooking” in 1958. Craig published “Collins Family Cookery” in 1957 a hugely popular book which celebrated the end of rationing with recipes that required six eggs and big slabs of butter. The 1960s found Craig writing books such as “Cottage Cheese and Yogurt”, “Banana Dishes” and “The Penguin Salad Book”. She also paid tribute to the land of her birth with “What’s Cooking in Scotland” in 1965 having already published the classic “The Scottish Cookery Book” in 1956. Most of Craig’s books had been aimed at the housewife, some of the earlier books had even assumed a household would have domestic servants, but in 1970 reflecting changing times she published “The Business Woman’s Cookbook”.

Craig was a prolific author of promotional cookbooks writing books for Primula cheese, Tate & Lyle sugar, OxO, the Potato Marketing Board and in 1937 a book on how to cook on new electric cookers for the British Electrical Development Association as well as a book for the Malt Vinegar Brewers Association “101 Recipes and Uses for Malt Vinegar”. Her final book a revised edition of “The Scottish Cookery Book” was completed whilst Craig was in hospital with a broken hip.  Craig heard that her publishers were thinking of getting someone else in to finish it and asked for her notes and files to be brought to her hospital bed. Craig finished the book and shortly afterward passed away at the age of 97.

You can consult many of Elizabeth Craig’s cookery and household management books in the National Library of Scotland.