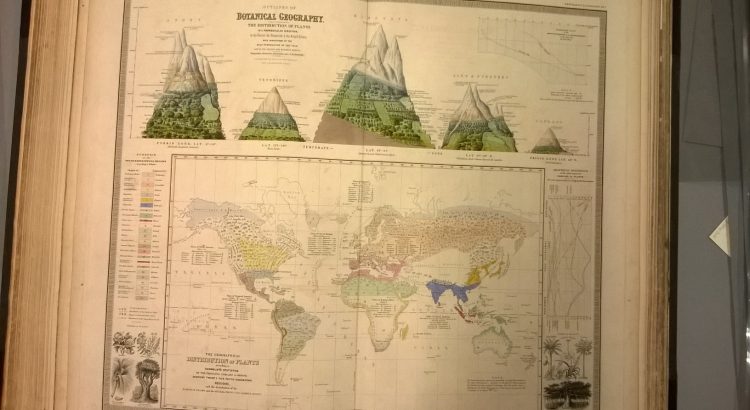 This month’s Map of the Month celebrates the work of Alexander von Humboldt. The map Outlines of Botanical Geography appears in W.K. Johnston’s Physical Atlas (1848). Humboldt played an important part in the design and production of this map.

Bearing an almost Faustian thirst for knowledge, Humboldt aimed to explore as much of the world as possible. He was fascinated by botany, geology, climate change, zoology and anthropology. This blog piece will briefly describe his famous adventure.

Humboldt in a letter to Goethe stated that “nature must be experienced through feeling”. His illustrations are both appealing to look at and convey his meticulously recorded data. His images combined the thoroughness of scientific recording with the allure of landscape paintings.

Humboldt and Bonpland left A Coruña (Spain) on 5th June 1799 to sail on the Pizarro (ship) heading towards the Americas. According to Humboldt’s Personal Narrative…, the route needed to be changed following an outbreak of disease on the ship. So they landed in Cumaná (Venezuela) instead of Cuba on 16th July 1799. Due to the change in route, Humboldt was able to map all of the Orinoco River.

To map the river, Humboldt and his team firstly walked through the hot and arid Llanos plains. They set off for the Orinoco River on 7th February 1800.  During the trek, they often experienced mirages and needed to escape dust devils under the unyielding sun. On 30th March, they reached the Apure River which flows into the Orinoco River.

Once at the river, Humboldt describes hundreds of basking crocodiles floating in the river that were at first mistaken for floating tree trunks. During the day, Humboldt would witness boa constrictors basking in the sun, capybaras running through the forest at the water’s edge and the elusive tapir.

Throughout their travels, Humboldt and Bonpland collected many specimens and dried them to from a botanical catalogue (similar to the image below):

Humboldt was particularly interested in how altitude and latitude determine vegetation zones. Alongside his temperature records, he was able to chart which plants grow where. His work laid the foundations of biogeography and ecology (including the concept behind isotherm charts).

Later in his journey, Humboldt would climb the 21,000ft Chimborazo volcano. The journey was hard-going. They reached 13,500 feet by mule but need to walk for the rest of the journey.  After 15,600, the porters would not walk any further. Humboldt described their shoes fell apart and they ended up walking barefoot with numb and bleeding feet. Humboldt had an injured foot and this became infected. The team also experienced altitude sickness and vertigo. Reaching 19,413 feet, they could not climb and further. Looking out towards the peak, with bloodshot eyes and bleeding gums, the fog disappeared and they could see the top of the Chimborazo (only 1,000 feet ahead).

Despite all these hardships, Humboldt and this team collected and recorded a substantial amount of new information about South America. Near the peak of Chimborazo, Humboldt wrote how the view inspired his idea which he called “sense of unity”. How everything like flora, fauna and geology is all interconnected. Humboldt collated all this information and his central idea of unity to form the Naturgemälde drawing.

The design of the Naturgemälde formed the concept of the mapped volcanoes at the top of our Map of the Month.

Although, Humboldt is not as well-known as other naturalist (such as John Muir), his travels inspired many naturalists (including Charles Darwin) and artist such as Frederic Edwin Church (a landscape painter).

Humboldt impact on modern science is substantial and it is impossible to fully cover his work and travel in a blog piece. However, we hold many books and items about Humboldt so it is not hard to find out more. For anyone interested in finding out more, I have listed a few books as a starting point: