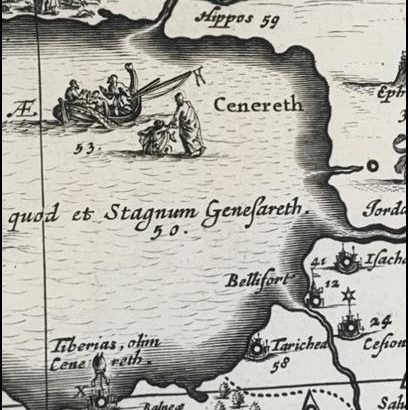 Blog written by Ted Simonds, History of the Book student at the University of Edinburgh

Whilst listing the maps included in the Library’s atlas collection I came across a six sheet wall chart bound into a composite atlas. When it came to researching the map in greater detail, I realised that compiling is something the reader, the cartographer, and the cataloguer have to contend with.

In the third English edition of Georg Horn’s A compleat body of ancient geography…’ (Bart 17.) published in 1741, I came across six maps of Canaan. Based on their scale and consistency of detail it was clear they were intended to be a wall map in six sheets. Initial searches confirmed this, revealing it was deigned by Jan Jansson and Georg Horn for his 1653 Accuratissima orbis antiqui delineato – with English translations published in 1700 and 1741. Historic wall decorations from the early modern period rarely survive – making a version preserved in a bound volume both a rare and interesting example of the way maps were made, distributed, and read.

The maps in question show the lands of the twelve tribes of Israel littered with scenes and vignettes. The wanderings of the Israelites, Jerusalem, and the destruction of Sodom and Gomorah are typical signs for smaller maps of the Holy Land, but what is unusual here is the level of detail achieved.

If arranged as intended, this six sheet map would be 86 x 176 cm – this means it offers a closer view of the land than other maps in the book, and its territory is more filled with narrative images as a result.

The book these maps find themselves in, Bart 17. is also a compilation, one that collects diverse map images in one place. As a ‘historic atlas’, the book isn’t just an atlas that is old, but an atlas that shows places as they used to be. Bart 17. does in a whole book what the map of Canaan does in miniature.

The maps contain scenes from both new and old testaments, as well as apocryphal and non-biblical religious scenes. In the six maps you can see Judith brandishing the head of Holofernes, Jesus performing various miracles around the Sea of Galilee, and St George slaying the dragon. By conflating old, new, and post testament events, the map becomes a visual compilation – a fun and boisterous ‘Where’s Wally?’ of biblical and non-biblical stories that contemporary readers could enjoy and understand.

Creating a list of the maps in an atlas requires close attention to every single map, and it can be easy to lose sight of the volume as a whole. But in creating such a resource it is possible to become attuned to the contents and flow of the book. Bart 17. moves through a map of the world, to Europe, focussing on individual countries, from Britain down to the Mediterranean. From here we move back in time to the travels of Alexander the Great, Virgil’s Aeneas, Persian King Artaxerxes, and the wanderings of the Biblical patriarchs. It’s here that the six wall maps are bound –before it closes with maps of Africa, Asia, and a reprint of Peutinger’s Roman tables.

Whilst it isn’t as obvious as the scenes on the wall-map of Canaan, the volume as a whole puts together maps showing the same places from a host of different times and perspectives. By turning the pages of the atlas you move through space and time in the same way you do when you look at the details on Janson and Horn’s map of Canaan.

The way we encounter catalogues and library reference works today is perhaps not as exciting as the way we encounter rare or special collection items. Nonetheless they are interesting as ways of thinking about how historical reading practices shade into the present. This is especially interesting with works as aware of space and time as historic atlases are.

Bart 17.’s maps are numbered in a brown ink and style that suggest the eighteenth (or nineteenth) century. The same handwriting has corrected the order of the maps as they appear in the volume and notes three maps that were “inserted loose”. This tells us that somewhere between the thought of making it, and it being with us today, the book we are looking at has been misbound.

Checking this through Koeman’s catalogue allows us to compare our book with others, to see if our misbinding was a common problem. The section under Janson’s name tells us that the maps in the 1741 English edition are identical to the French edition published a few years earlier. Turning back a few pages in the catalogue there is a map listing (in French) that matches the contents page in our book – but not the manuscript order in Bart 17. This should indicate that the order on the contents page matches the order of the maps, but a note tells us (in an otherwise very ordered book) that a copy of the book in the British Library is “totally confused”. It would seem that in the world of historic maps, atlases, and catalogues, nothing is as simple as it seems. The map, the atlas and the catalogue put together information from different times and places in one place, the page. And it’s the job of the reader to figure it all out.

In my placement with the Library’s Map Collections I’ve been able to see a number of early atlases and maps of historic places – in this example I hope I’ve shown how collating places, maps, and books aren’t so different, and that the way we use libraries and finding aids have more in common with maps than we think.