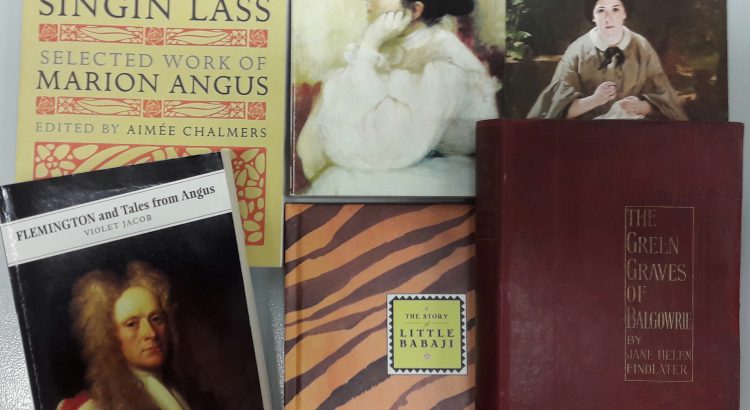 Once you get past the early hours of the morning traditionally very little happens in Scotland on New Year’s Day. Appropriately on January 1st 2017 something is happening that is very quiet, automatic but in terms of Scottish literature quite exciting. The works of five varied but important Scottish female authors will no longer be protected by copyright from that day.

The writers are Marion Angus, Helen Bannerman, Catherine Carswell, Jane Helen Findlater and Violet Jacob. Apart from a literary reputation they all share the fact that they died in 1946. In Europe books become public domain seventy years after the author’s death on the following January the 1st. Other authors coming out of copyright in Europe in 2017 are Damon Runyon, the American short story writer and creator of such colourful characters as Nathan Detroit, Harry the Horse, Good Time Charley and the Seldom Seen Kid (his stories were adapted into the musical “Guys and Dolls”) and H.G Wells author of “War of the Worlds”, “The Time Machine” and “The History of Mr Polly”. The results of Wells coming into the public domain will be obvious in bookshops in 2017 as many of his books are scheduled to be republished. Books that are in the public domain can be republished by anyone and the publishers do not have to pay any royalties to the author’s estate. This means that it is possible for cheap popular editions to be published and also for texts to be made available free online.

The National Library of Scotland has digitised works by the above five Scottish women and in early 2017 we plan to make these available online. We will also be publishing blogs on each of the writers in early 2017 with links to the digital copies of their works.

In the late 19th and early 20th century the careers and opportunities open to women in Scotland were limited. A career they could pursue was as a writer. These five authors followed in the footsteps of earlier Scottish women writers. In the late 18th and early 19th centuries Scotland was home to several important female novelists. You can read about the pioneering Scottish novelists Susan Ferrier, Elizabeth Hamilton, Mary Brunton and Catherine Sinclair on our website and also read their novels on-line.

The five writers we are digitising for 2017 in the main had great popular success during their lifetimes but their works often went out of print after they died. After falling into relative obscurity some were rediscovered from the 1980s onwards with selected works being republished by the London based publisher Virago and also Scottish publishers such as Canongate and Polygon.

The digitised writers came from varied backgrounds and worked in different literary forms and genres. They wrote biographies, historical and contemporary novels, poetry (both in Scots and English) and stories for children. Each author will be covered more fully in blogs in 2017 with links to the digital copies of their work but a brief introduction to their life and works follows.

A daughter of the manse her father was the minister at the Erskine Church, Arbroath. She wrote poetry and short stories, and her poems were published in “Northern Numbers” (1921-2) edited by Hugh MacDiarmid a key early publication in the Scottish Renaissance. Her first collection of poems “The Lilt and other poems” was published in 1922 when Angus was 56 and was followed by five other collections. Heavily influenced by the Scottish ballad tradition her work is mainly in Scots. Probably her most famous poem “Alas, Poor Queen” is about Mary, Queen of Scots. After some years of relative neglect her work has been republished in recent years. In 2006 the anthology “The Singin Lass” brought together the best of her work with a substantial introduction by editor Aimee Chalmers including much biographical detail. You can read more about Marion Angus on the Scottish Poetry Library website.

Bannerman was an early pioneer of the picture book for children. In 1889 she married William Burney Bannerman and spent the next thirty years in India where her husband worked as a doctor for the Indian Medical Service. Here she started to think up stories to tell to her two small daughters. “The Story of Little Black Sambo” written and illustrated by Bannerman was published in 1899 and quickly became a huge success. It tells the story of a resourceful small boy who outwits some hungry tigers who eventually turn into butter which is used to make pancakes which the small boy eats. The title and illustrations, in particular the crude stereotypical illustrations that appeared in pirated North American editions that had nothing to do with Bannerman, have led to the book becoming controversial. This essay by Dashini Jeyathurai for the South Asian American Digital Archive addresses the complicated issues around Bannerman’s famous work

In 1996 a new adaption of the book “The Story of Little Babaji” was written by Fred Marcellino. The little boy and his parents are given Indian names and new illustrations make the Indian setting clearer. This version reveals the charm and clever structure of Bannerman’s story without the now problematic language of the original. The National Library of Scotland also holds original letters by Bannerman and her husband written from India to their children in Edinburgh that include watercolour illustrations of India.

Carswell was born into a God fearing Free Church family in Glasgow. She grew up to be a free spirited journalist and author whose works often attracted controversy. She was sacked from the Glasgow Herald for a favourable review of D. H. Lawrence’s “The Rainbow” in 1915. Lawrence was a close friend and asked for Carswell’s opinion on a work in progress “Women in Love” and later he commented on drafts of Carswell’s first novel “Open the door”. Her 1930 biography “The life of Robert Burns” caused consternation with its frank portrayal of Burns’ life and work and Carswell was sent a bullet in the post. She was re-discovered by a new generation when her semi-autobiographical novel “Open the door” (1920) was published as a Virago Modern Classic in 1986 followed by her second novel “The Camomile” (1922) in 1987. An unfinished autobiography “Lying Awake” was published posthumously in 1950 and a biography by Jan Pilditch in 1997. You can read more about Carswell’s life on this page set up to accompany the BBC Two series “Writing Scotland”

Born in Edinburgh her father James was a Free Church Minister and her mother Sarah had translated German Hymns with her sister Jane Borthwick. These were collected as “Hymns from the Land of Luther”. Jane Findlater is closely associated with her elder sister Mary born in 1865. The sisters shared a love of reading and writing and a sharp intelligence and would later collaborate on several books. Jane published a novel “The Green Graves of Balgowrie” (1896). A historical novel set in the 18th century and loosely based on her family’s history it was a success and served as an entrée to literary society for both sisters who subsequently toured America meeting Andrew Carnegie, Frances Hodgson Burnett and befriending Henry James. It also rescued the sisters from the extreme poverty that followed the death of their father in 1886. Jane had to resort to writing her novel on discarded sheets of paper from a local grocer. The sisters would find their greatest success with a series of collaborative novels starting with “Crossriggs” published in 1908, a tale of Scottish rural life set in the 1890s. Although Jane was well regarded for her authentic portrayal of rural life in Scotland and her and Mary’s work had many famous admirers including Ellen Terry, Rudyard Kipling and Virginia Woolf by the 1920s it began to fall out of fashion. Mary would outlive Jane by nearly twenty years dying in 1963 at the age of 98. This means that although Jane’s own writing comes into the public domain in 2017 her collaborations with Mary stay in copyright until 2034. Although Jane’s solo novels have gone out of print “Crossriggs” was republished as a Virago Modern Classic in 1986. A biography of Mary and Jane “The Findlater sisters” by Eileen Mackenzie was published in 1964.

This website about the Findlater family has additional information about Jane Findlater and her sister Mary.

John Buchan called Violet Jacob’s novel “Flemington” (1911)”the best Scots romance since “The Master of Ballantrae”. This classic novel of the 1745 Jacobite Rising draws on her own family history. Jacob was born into an aristocratic family who had lived at the House of Dun near Montrose since the fifteenth century. Home educated she grew up to have a deep appreciation of the Angus dialect and countryside. She married Arthur Jacob an Irish born solider with the British Army in 1896 joining him on a posting to India. In India she painted the flora and fauna; her flower paintings are held at the Royal Botanic Gardens in Edinburgh, but on returning to Britain in 1901 she concentrated on writing. Her novels such as “The Interloper” are known for their Scots dialogue. After publishing “Flemington” she concentrated on writing poetry mainly in Scots. Volumes such as “Song of Angus” (1915) and “Bonnie Joann and other poems” were part of the Scottish Renaissance and the accompanying revival of interest in Scots language literature in the early 20th century looking back beyond Burns to Henryson and Dunbar for inspiration. “Flemington” and her poetry have both stayed in print since her death and are now regarded as classics of Scottish literature. Her “Diaries and letters from India 1895-1900” were published by Canongate in 1990.

This link is to a site written by students at the University of Victoria in 2013 which cover Jacob’s life up to 1916 the year when her son Harry died at the Somme.

Look out for our blogs and make a resolution to read some classic Scottish fiction or poetry in 2017.