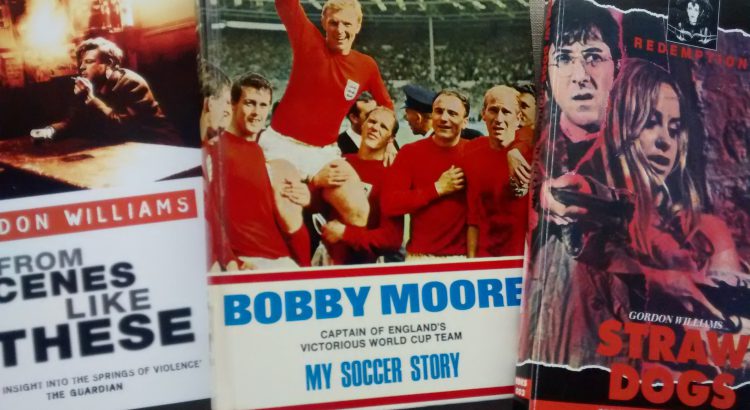 George Gissing’s 1891 novel “New Grub Street” about literary and journalistic London has as its main characters two aspiring writers. Jasper Milvain who puts commercial success ahead of art and secures the editorship of an important periodical and Edwin Reardon who although a talented novelist can’t support his family, his wife leaves him and he ends up in an early grave.

If you wanted to write a similar novel about the life of a jobbing writer in the second half of the 20th century you would find ample inspiration in the life and career of Scottish novelist Gordon Williams who died last week at the age of 83. A serious and acclaimed novelist he would also turn his hand to almost any journalistic or literary task in order to keep the wolf from the door. At various points in his career he was a ghostwriter for Denis Law, biographer of jazz legend Acker Bilk, commercial manager at Chelsea FC and on the shortlist for the first Booker Prize for literature. Williams would take almost any writing assignment he was offered whilst pursing his goal of becoming a published novelist.

Born in Paisley in 1934 he started his journalistic career as a junior reporter at the Johnstone Advertiser in the 1950s. After national service with the RAF he moved to a better job with the Poole and Dorset Herald but had the long term aim of writing a novel. His first appearance between book covers though was as the author of the official history of the London Trades Council in 1960 and he followed this with a hack biography of English jazz clarinettist Acker Bilk in 1962.

His first novel “The Last Day of Lincoln Charles” was published in 1965 but made little impact. Williams though was busy earning a crust as a ghostwriter for some of the most famous footballers in Britain. He had been hired by the Daily Mail to commission articles by top sports star and ended up writing the articles. During this period he ghost wrote columns and books for the most famous footballers of the day including Denis Law and the captain of England’s World Cup World Cup winning squad of 1966 Bobby Moore. Williams in fact wrote the autobiography of Bobby Moore published after the 1966 World Cup win. Later his day job as commercial manager at Chelsea FC brought him into contact with the team captain Terry Venables. They began a literary collaboration, Williams ghosting an autobiography of Venables and the two of them co-writing the football novel “They used to play on grass” regarded by many as the best novel about football ever written. Later they would collaborate on three novels about Hazell, a Cockney private eye and the basis for a TV series starring Nicholas Ball.

All the while Williams was pursuing a more serious and increasingly lucrative literary career. His 1967 novel “The man who had power over woman” had some success and the film rights were sold to Hollywood for a considerable sum. In 1968 he really hit the literary big time with the novel “From scenes like these”. The title is from Burns’ “Cotter’s Saturday night”. It was shortlisted for the first Booker Prize in 1969 along with novels by Iris Murdoch and Muriel Spark. P. H. Newby won the Prize but Williams’ book is now regarded as a key Scottish novel written at a time when novels about contemporary Scotland were few and far between.   Around the same time he wrote a couple of paperback original thrillers as Jack Lang for £300 a time.

Williams’ follow up to “From scenes like these” published under his own name was “The Siege of Trencher’s Farm”. Written in nine days with an eye on a film deal it was first planned as a film for Roman Polanski but would eventually be filmed as “Straw Dogs” by Sam Peckinpah, one of the most controversial films of the Seventies. Williams used the money he earned from the 2011 remake to get a new bathroom fitted to his house.

In 1974 he published “The Bornless Keeper” as by P B Yuill a supernatural thriller. He was though increasingly involved in movie projects. When an ambitious science fiction film project about miniaturized government agents failed to get made Williams used the material as the basis for a trilogy of novels “The Micronauts”, “The Microcolony” and “Revolt of the Micronauts”. Around this time he was approached by an inexperienced film director to write a script for a film that would feature mainly amateur actors from the Glasgow Youth Theatre. Williams turned the project down feeling he had bigger fish to fry. The film director was Bill Forsyth and the project would become “Gregory’s Girl” one of the most celebrated Scottish films of the 20th century.

Williams’ next project was a series of novels which his publisher felt combined Flashman, Le Carre, and Ragtime. Published in 1983 “Pomeroy an American diplomat” would be the only novel in the proposed series and the last novel to be published by Williams. Williams would continue to write journalism and for films and television for a while but then largely disappeared. When the critic and novelist D J. Taylor interviewed him for the Guardian in 2003 he said he had got bored writing novels. He was though he told Taylor close to finishing a novel called “Deadline for a ghost”. It has yet to be published.

He had become the forgotten man of Scottish literature and sadly he won’t now be making a comeback. We can though hope that his death leads to a re-evaluation of his work. Amongst the 26 novels he published are some gems that deserve to be back in print. He also achieved what was always his ultimate aim to earn his living with his pen.