Hello, I’m Moray Teale and I am the Europeana Rise of Literacy Project Coordinator at the National Library.

Today, October 16th, is National Dictionary Day in the United States! It celebrates the birth of Noah Webster, the most famous American lexicographer. Webster’s Dictionary of the English Language was published in 1828 but it was not the first to be published by an American. That honour goes to A school dictionary: being a compendium of the latest and most improved dictionaries, which was published in 1798. By amazing coincidence the author’s name was Samuel Johnson Jr. – but there is no relation to the great English lexicographer.

The earliest examples of dictionaries in English are wordlists limited to specialised subjects and difficult words. Robert Cawdrey’s Table Alphabeticall (1604) was the first English single-language dictionary and listed 3000 words with brief definitions of just one or two words  ‘whereby [people] may more easily and better vnderstand many hard English words…and also be made able to vse the same aptly themselues.’ 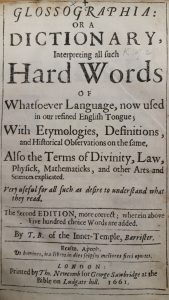 A more comprehensive attempt was made by Thomas Blount, whose Glossographia from 1661 listed more than 11,000 words with detailed definitions. Blount recognised that foreign trade, the sciences and new products were flooding the language with new and unfamiliar words. Glossographia was the first English dictionary to explore the origins of words as well as their meanings.

The most famous and most extensive English dictionary was published by Dr Samuel Johnson in 1755. A Dictionary of the English Language contained 42.773 entries and ran to two very large volumes. Its detailed etymologies and literary examples set it apart from even its most sophisticated predecessors. It was also personal and prescriptive and has become notorious for expressing Johnson’s own prejudices rather than objective definitions. Many words, particularly dialect words, are dismissed as ‘low’ or ‘barbarous’. 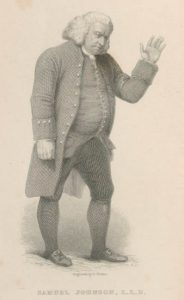 Cant, dialect and the battle against non-standard English

Dictionaries of ‘incorrect’ English were actually more common than those of standard words and expressions. One popular form was the ‘canting dictionary’, which described the colourful slang associated with criminals. Popular pamphlets and chapbooks often included glossaries to help readers decipher the speech of rogues and highwaymen. 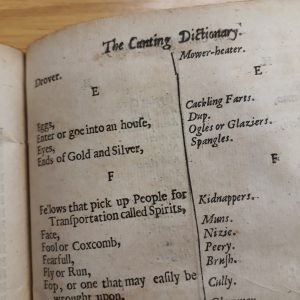 The terms ‘shoplifter’, ‘kidnapper’ and ‘swag’ were all originally thieves’ cant!

My personal favourite is ‘cackling farts’, otherwise known as eggs!

Dialects as well as varieties of argot were seen as vulgar, and words and phrases associated with Scotland (and many parts of England) were condemned. Samuel Johnson’s  inconsistent attitude towards Scotland are well-known, but even prominent Scots such as the philosopher David Hume and the poet James Beattie published lists of Scotticisms to be avoided.

As a multi-lingual nation Scotland also had a need for reference works in Lowland Scots and Scottish Gaelic. Glossaries of Scots words, mostly associated with the Lowlands, appeared in translations such as Thomas Ruddiman’s Scots translation of Aeneis (1710), which included definitions, etymologies as well as examples from early manuscripts. Lists of Scots words and their meanings were often included in the works of poets such as Allan Ramsay and Robert Burns, who were shining lights in the vernacular revival of the eighteenth century. These works championed the Scots tongue rather than criticising it.

The first Scots dictionary was published in 1808 by Rev John Jamieson. He saw Anglicisation as ‘national servility’ and sought to establish Scots as an independent language. He suggested that the origin of Scots words could be found in the Pictish and Scandinavian languages and included detailed literary quotations to illustrate his definitions. 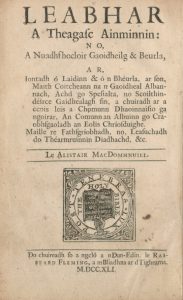 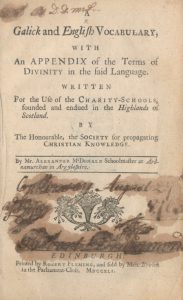 For Gaelic speakers in the Highlands and Islands, eighteenth-century dictionaries were designed to facilitate knowledge of English rather than their native language and dictionaries were usually bilingual. Alexander MacDonald’s 1741 Galick and English Vocabulary was the first non-religious book printed in Gaelic and was commissioned by the Society in Scotland for the Propagation of Christian Knowledge, a society notorious for its attempts to suppress the Gaelic language in favour of English.