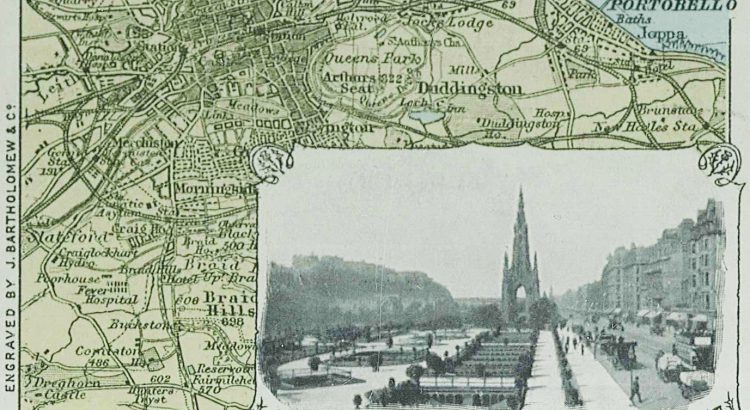 Holiday season is upon us; time to remember to send that postcard home! If you are either sending or receiving postcards, I think you will enjoy this light-hearted ramble though some of the Map Library’s Postcard collection.  I have selected a few of the Geographical Series of Postcards (John Walker & Co 1903) to enrich this brief timeline and general background.

The first postcards were originally plain and simply a sheet of card to write a message and address with a pre-printed stamp. These postcards appeared in 1870 in the UK and they were produced solely by the Post Office (now in its 500th anniversary).

However, it did not take long for pictures, photos and maps to appear on postcards with the first picture postcard appearing in 1894.

Before 1902 postcards were issued with what was called undivided backs – unlike more recent postcards  they didn’t have space for an address and a message. Consequently, only the address could be written on the reverse. The image was placed on obverse of the postcard  with some space around the edges for the sender to add a message. The messages were often crammed around the sides, along the top and sometimes over the image as shown in the example below:

In 1902, postcards changed and the back was divided- allowing one side for the address and the other for the message. Soon picture postcards experienced a boom particularly from 1902 to 1920 – this period is often referred to as the Golden Age. During the Golden Age, the Geographical Series from John Walker and Co were printed. Each postcard typically showed a city or town map with a black and white vignette. However, one or two depicted the plan of a building (like the postcard of Melrose Abbey below):

John Walker’s postcards were printed by the Bartholomew Firm and included many regions throughout Great Britain and some postcards of countries further afield. The reverse of the postcards had a tell-tale red anchor through the POST-CARD title:

We hold a large collection of printing proofs from this postcard series within the Bartholomew Archive. The printing proofs are uncatalogued but each postcard has a unique number (typically found in the top left corner) that can help identity them. Substantial indexes of the Geographical Series can be found on the internet.

Beyond the Geographical Series, we also hold a collection of beautiful and in-copyright postcards. These were collected by a former Head of the Map Library and they feature a large number of countries all over the world.

Some of my personal highlights from this collection include:

If you are on holiday and spot a map postcard-we would be happily receive the postcard from you to add to our collections. Please send any postcards to:

For more information about the history of postcards, please consult the following references:

Willoughby, M. (1992). A history of postcards: a pictorial record from the turn of the century to the present day. Studio Editions. (our shelfmark: H8.94.742)

‘You are Here – A journey through maps‘runs until 2nd April 2017. Entry is free.