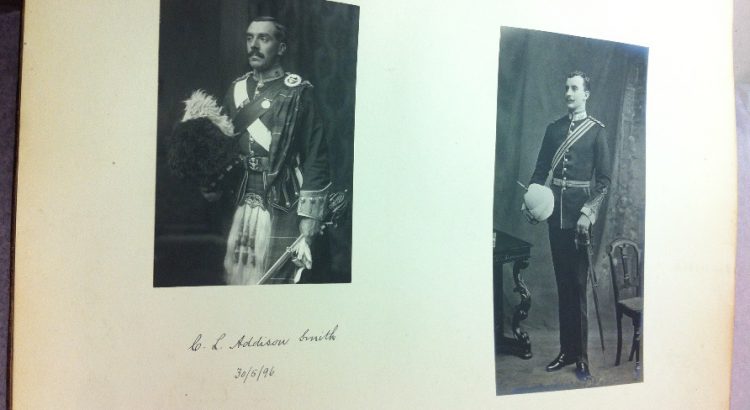 Within the collections here at the National Library we have a wide range of photographic material, displaying a variety of processes, formats and subjects.  Identification of photographic material can be tricky as there are many different processes that have been used and experimented with since the development of photography in the 1830s.  There are a number of basic steps to try to identify the photographic material you are viewing but this methodical approach can be complicated by the fact that many photographic prints have been processed to look like something they are not.  For example, this can be done by toning a print with a compound during processing which alters the material’s chemical properties and changes the colour of the image.

A process which is frequently imitated is the platinoype.  The platinotype was patented by William Willis in 1873 and quickly grew in popularity as it created delicate, matte images with wide tonal range, which were extremely durable as metallic platinum, the image forming material, has a high chemical stability.  Many photographers favoured this artistic medium, including Peter Henry Emmerson, Alfred Stieglitz and Paul Strand.

The process of creating a platinum print involves coating a sheet of paper with a solution of ferric oxalate, oxalic acid and potassium tetrachloroplatinite so that it becomes sensitive to light.  To form the image, the sensitized paper is exposed while in contact with a negative and developed with potassium oxalate.  The rising expense of platinum at the beginning of the 20th Century led to many chemical variations and substitutions in the platinotype process, and during WWI, platinum was declared a strategic metal by the British government.  This naturally led to a demand for alternative, cheaper methods of producing the desired platinum look, so many prints may display the tonal and textural qualities of the platinotype, but are chemically very different.

One interesting item from the National Library’s photographic collection is a particularly large photograph album of battalions and officers of the Seaforth Highlanders.  This leather bound volume contains both portraits and landscape images printed using a wide variety of processes, including platinotypes.  The majority of the prints are quickly recognisable as albumen, a common 19th Century process which involved coating a thin sheet of paper with egg white and silver nitrate before exposure to sunlight while in contact with a negative.  However, some prints are a little harder to define.  The image above shows two visually similar prints on the same page.  The prints are very similar in tone, contrast, softness of detail and surface texture, and on first viewing both display the characteristics of a platinum print.  However, they are actually different processes, and to discover which is the true platinum, the prints need to be viewed under magnification and any signs of deterioration should be analysed.

By looking under magnification at the two prints, it is clear that the image on the right is not a platinotype as no paper fibres are visible.  In a platinum print the metallic platinum which forms the image is imbedded directly into the paper’s surface leaving the paper fibres clearly visible under magnification.  The print on the left displayed the characteristic surface texture of a platinotype when seen with magnification, the paper fibres being clearly visible.  When viewing the edges of the print on the right under magnification, three layers were identified, the paper substrate, the baryta layer and the photographic emulsion.  The baryta layer is a mix of gelatine and barium sulphate and provides a smooth, white surface upon which to apply the emulsion layer.  This three layer print structure indicates that the image on the right is either a silver gelatine or a collodion print, as these processes used the baryta coated base.

Deterioration of a print can also be a signifier of the material present and therefore shed light on the process used in its creation.  As a platinum print is incredibly chemically stable and its image forming particles are imbedded in the paper, it will not display any silver mirroring.  Silver mirroring is a form of deterioration which develops in prints when the silver particles which create the image are affected by pollution and humidity, causing the particles to migrate to the surface of the emulsion layer.  This is evident at the bottom of the right print, further evidence that this is not a platinotype.

Another form of deterioration which can help to identify a platinotype is the formation of a ghost image on the adjacent page to the print when it is housed in an album.  Confusingly, this can be seen in the Highlanders album for both images.  The ghost image is a chemical reaction within the paper which is caused through contact with the platinum on the opposite page.

The reason for the image on the right’s similar tonal qualities to the platinotype could be attributed, as previously mentioned, to the toning process.  It was a popular practice to tone collodion and gelatine prints after development with platinum in order to simulate the platinotype’s visual characteristics and increase the print’s longevity.  It is possible that this presence of platinum could also explain why there is a ghost image opposite both prints within the album.

It is often difficult to accurately determine how a print was made and the tendency for photographers to imitate one process with another can add to the confusion.  When identifying photographic processes, begin by ascertaining how many layers the print has, viewing the surface texture under magnification and recognising the causes of any deterioration.

Lavédrine, B (2009), Photographs of the Past: Process and Preservation, California: Getty Conservation Institute