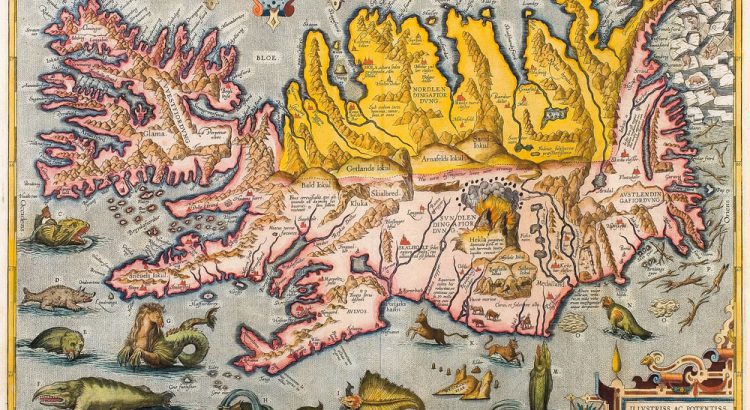 What does “Iceland” mean to you? To me the name conjures up the distinctive Icelandic style of knitting very cosy jumpers, Magnus and Sally Magnusson, long dark nights with the Northern Lights putting on a show, and nervously watching the latest up-dates on how the erupting volcano was affecting flights. To Andreas Villeius when he was creating his Islandia map in the late 16th century it was a country of fascinating sea creatures, as well as an erupting volcano! Fimmvorduhals By Boaworm (Own work) [CC BY 3.0], via Wikimedia Commons

Detail taken from our January 2017 Map of the Month

When it was first published in Abraham Ortelius’ Theatrum Orbis Terrarum atlas in 1590, it was the most accurate map of Iceland to date. The map includes more than 200 placenames, mainly Danish in origin. Many were mis-translated from the original map.  Between 1570 and 1612 31 editions of the atlas were published.  The sea creatures were removed from the map in Johann Jansson’s 1612 version.

Starting from creature A to the right of the Islandia label and moving anti-clockwise we’ll now look at each creature in turn. (There is no creature J)

A is the the Narwhal or Narwhale.  Legend has it that if you eat this creature you will die immediately.  However, the spiralled tusk is a good antidote and powerful medicine against poison.  Sometimes this tusk was sold as unicorn horn.  The Narwhal is a real sea dwelling mammal.

B is the Rorqual or balaenopterid whale. In contrast to the Narwhal this whale has wholesome and tasty meat, while its fat is good against many diseases!  Due to its peaceful disposition the Rorqual frequently fell prey to whaling ships.  This is an example of confusing the different species of whale.  The Rorqual is not one type of whale, it is the name given to the largest group of baleen whales.  This group includes the blue whale, as well as the northern minke whale.

C is the Burchvalur.  This creature’s head was bigger than its body.  Its strong teeth were used to make chess pieces.  This carving of whale teeth and walrus ivory is known as scrimshaw.  The Lewis Chessmen are examples of scrimshaw.  Other, later, examples can be very detailed.  Making scrimshaw items provided the seamen with something to pass their time, and a way of making some extra money when they sold their scrimshaw. Some seamen acted as dealers for the Inuit carved scrimshaw.

D is the Hyena or Seahog. This was a monstrous kind of fish with three eyes on its body.  To us the hyena is an African carnivore with a distinctive “laugh”.  However, an obsolete word for hyena is ravenous fish.  This is derived from the Greek hus, which becomes hys when translated into English. The word is pronounced “hoose”. E is the Ziphius.  This horrible sea monster can swallow a seal in one bite, but on the other hand is very sensitive to noise.  Ziphius can either be Cuvier’s beaked whale, Ziphius cavirostris, or an Orca, or Killer whale. Creature G won’t need much introduction, the Seahorse. This comes from the Greek for horse sea monster; Hippos for horse, and Campus for seamonster. The description given at the time that the seahorse often causes great scare to fishermen, does not match the delicate Knysna, or Cape, Seahorse I saw during a holiday to South Africa.  The Knysna Seahorse, or Hippocampus capensis, is the most endangered seahorse in the world.  It is only found in the estuaries at Knysna, Keurbooms and Swartvlei.  The South African National Parks office on Thesen Island has a tank with some of these small mottled brown seahorses in.

Creature H has featured in three episodes of The Big Bang Theory as well as in Pirates of the Caribbean: Dead Main’s Chest, Game of Thrones, and the 2010 version of Clash of the Titans. The Kraken can take different forms; a giant squid, or as on this map, the largest whale.  This massive creature is unable to chase its prey, so when it is hungry he “gives forth a violent belch”, which brings up food to entice the smaller fish into his mouth and then the smaller fish are eaten.  The medieval north had a sea monster called the Hafgufa, which evolved into the Kraken, and in turn became associated with the giant squid which Sheldon dreamed dragged Leonard overboard in the “Hofstadter Insufficiency” episode of the “Big Bang Theory”.

Could this be a First World War kraken “incident”?

I is the Skautuhvalur which is kind of ray.  This sea creature is bigger covered in bristles and bones and overturns ships with its fins.  The most common species on ray in Icelandic waters today is the starry ray.  Due to the grey skate becoming rare the strarry ray is now increasingly used in Icelandic cooking.

As you may have guessed creature K is the Seenaut (sea cow), also known as a manatee, or dugong.  The label on the map, “vacca marina” is Latin for sea cow.  The legend attached to them at the time this map was created was that if the small bag hanging by their nose (their large snout) was broken they could live permanently on land with domestic cattle.  These gentle sea creatures graze the sea bed, and can eat up to a tenth of their own weight in one day. Although creature L, the Steipereidur, does not look very friendly, legend has it that this is the gentlest of whales towards humans.  It has been said to fight other whale in order to defend fishermen.

On the other hand, creature M, the Staukul or Springual, greedily goes after human flesh. This monster has been observed to stand upright on its tail for a whole day. The name is derived from “leaping” or “springing”.  The springing whale is another name for the orca, or killer whale.

The Rostuger, Rosmal, or Rosmar is creature N.  It is better known to us as the walrus. Legend has it that this creature slept for twelve hours while hanging from a rock by its two long teeth.  The Rostunger had very hard to penetrate skin as well as very short “legs”. Object O is Spermaceti or Hualambur. This is better known as ambergris, or whale amber. Ambergris is formed in the digestive system of sperm whales and is found floating in the sea.  It is very valuable to perfumiers, who add it to perfume to help the scent last longer on the skin.

Ambergris – By Photographer: Peter Kaminski [CC BY 2.0], via Wikimedia Commons

The final two objects are the most readily recognisable.  P is driftwood. At the time that this map was published Iceland had very few trees large enough for use in ship building or construction.  Driftwood blown from Norway was a valuable commodity. Shown on the ice flow Objects Q are a number of recognisable polar bears. You can view Abraham Ortelius’ Islandia map throughout the month of January in our maps exhibition, You are Here: A journey through maps, at The National Library of Scotland, George IV Bridge, Edinburgh, EH1 1EW. The exhibition is open 7 days a week and runs until 2 April 2017.