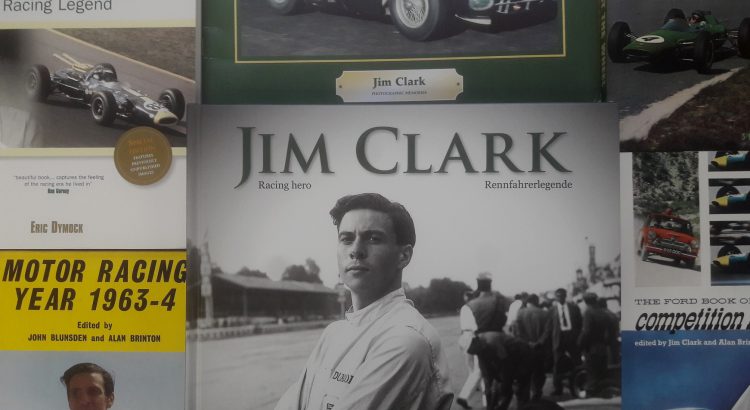 When it came to the launch of a Scottish Sports Hall of Fame in 2002 there could have been no more natural choice than Jim Clark – by any standard, a Scottish sporting great. Winner of a then record twenty-five Formula 1 Grand Prix, Clark was a respected international motor-racing superstar whose sheer skill meant that his tragic death at 32 in a Formula 2 race at Hockenheim on 7 April 1968 stunned fans and professional drivers alike[1], not least in Scotland.

His success and fame created demand for the story behind the man and in the 1960s this meant books and magazines. The National Library of Scotland has numerous works from the period as well as commemorative material produced after his premature death, contrasting the life of the quiet Berwickshire farmer with that of a Team Lotus champion.

Winning the Formula One world championship in 1963 driving with Lotus meant that Clark featured on the cover of the Motor racing year 1963-1964 [shelf mark NF.1699], as well as heavily inside. His new status led to the publication of his autobiography Jim Clark at the wheel. The world motor racing champion’s own story, [shelf mark NF.1349.d.6], which was written with the help of the Scottish motor sport journalist Graham Gauld. Such was the demand for this work a mass market paperback edition was released by Pan Books in 1965 [shelf mark 5.2876]. 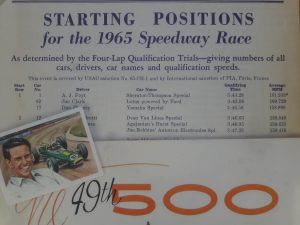 1965 was a remarkable year in the racing career of Jim Clark – he won the Formula 1 World Championship, taking six Grand Prix on the way, the Tasman series in Australia, and most strikingly, the Indianapolis 500 – the first non-American since 1916[2] to win this prestigious title in the US motor racing calendar. Success in America merited a cover story in Time magazine [July 9th issue –  shelf mark Y.132]. However, he also found time for some motor-racing writing of his own, co-editing The Ford book of competition motoring [shelf mark NG.1239.c.11].

Motor sport magazine covered Clark’s career in detail during 1965, and he graced the cover of the September issue – in the company of fellow drivers Graham Hill and the American Dan Gurnay – after winning the German Grand Prix and clinching the World Championship [shelf NB.93]. Interestingly, Clark appears in several advertisements throughout 1965 in this magazine, endorsing Firestone Tyres used in the Indianapolis 500 and the Esso products preferred by Team Lotus’ Formula 1 World Championship bid.

While Clark is perhaps best remembered in Britain as a Formula 1 champion, he was actually a versatile driver as the books about him illustrate. He raced saloon cars, sports cars, touring cars, competed in hill climbs and speed events before he graduated to Formula 1, and drove in Formula 2 championships in parallel with his Formula 1 career every year between 1964 and 1968.

The shock felt at Jim Clark’s death in a Formula 2 race in 1968 is evident from the newspaper coverage. For example, the Daily record [shelf mark CB.2/152(5- )] on 8 and 10 April cover the circumstances of his fatal crash and his funeral at Chirnside respectively, on the front and centre pages in both editions. 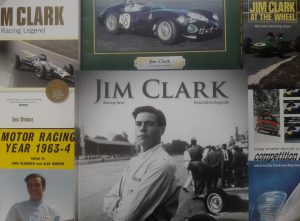 The Jim Clark story has been revisited on many occasions since his death, with the first posthumous work Jim Clark [shelf mark NC.260.g.20] appearing during 1968, containing fond tributes from friends and fellow professionals. In 2014 Graham Gauld revisited Clark’s life and career with the high-end work Jim Clark : racing hero / Rennfahrerlegende [shelf mark HB6.215.2.13]. This title was published in Germany and is consequently an English and German dual language work. It is also a beautiful book, focusing on Clark’s character and cars and the people and places in his life and career – all illustrated with crisp, evocative photographs.

Anniversaries are apt opportunities to reflect on significant events or lives – and this year the National Library has acquired a copy of the original race programme for the Indianapolis 500 of 31 May 1965, including a ‘Starting positions’ sheet. This shows Clark in the front row in his Lotus Ford, No. 82. Marking the 50th anniversary of his death a new book is due for publication in March, Jim Clark: The Best of the Best by David Tremayne, and this will be collected by the Library by legal deposit.

If you are interested in any of the material mentioned above or in other books about Jim Clark and Scottish motor racing please contact Trevor Thomson at t.thomson@nls.uk or visit the National Library of Scotland catalogue online at http://main-cat.nls.uk/vwebv/searchBasic?sk=nls_en. Many of the books mentioned will be on display at the Library on George IV Bridge, Edinburgh, in Summer 2018.