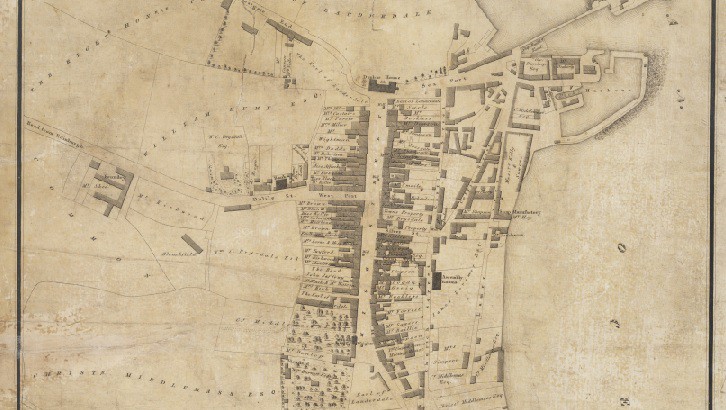 There are many unique maps in the Library’s vast collection. Many of these are available on the maps website, and our digital team are striving to put many more on in the coming years. But occasionally a map is conspicuous by its absence. That was just the case for John Wood’s map of Dunbar.

John Wood (ca. 1780-1847) was the most significant surveyor of British towns in the early 19th century. In 1818, began to survey Scottish towns, and ten years later published a volume called Town Atlas of Scotland which contained 48 of his maps (although not all were his own surveys). His intent was to sell these to interested parties. The National Library of Scotland owns a copy of this volume and has digitised the maps within and presented them online.

Wood’s work is incredibly detailed and, as such, is a great resource for local and family historians – researchers can pick out details from townscapes 200 years ago, or due to Wood often adding the names of property owners, can sometimes be linked to the later Valuation Rolls.

After his work on Scotland’s towns he moved south and completed a number in England, bringing his total town plans produced to an estimated 148 works.

But the Dunbar map was created after Wood’s volume of maps. And the Library does not own a copy. East Lothian Libraries do, however. And some years ago they allowed the National Library of Scotland to digitise it. After kindly receiving permission from East Lothian Libraries we can now present John Wood’s map of Dunbar online for the very first time. Enjoy – it is indeed a rarity, the only known version in existence.