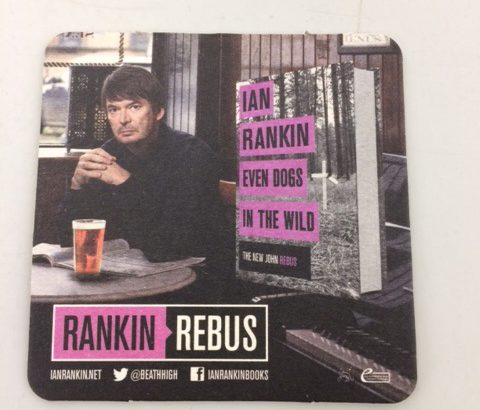 It is thirty years since the first Rebus novel “Knots & crosses” was published and to mark the occasion REBUSFEST a weekend of literature, art, film and music celebrating the detective is being held in Edinburgh from 30th June to 2nd July. You can tour Rebus’s Edinburgh, sample whisky at the Caledonian Hotel or attend a crime writing workshop amongst other events many hosted by Rankin himself. Most events are sold out but as of writing you can still get tickets for a Rebus quiz hosted by Ian Rankin and Phil Jupitus on Sunday 2nd July and a special night out with Rebus at the Queen’s Hall on the 30th June with Ian Rankin and guests. Throughout the weekend you can also visit a free Rebus exhibition at the Writer’s Museum or a free Museum Noir Trail at the National Museum of Scotland featuring exhibits selected by Rankin.

To mark the 30th anniversary we thought we would take a look back at the first Rebus novel “Knots & Crosses”. Rankin was 25, unmarried and a post graduate student at the University of Edinburgh working on a never to be completed PhD about Muriel Spark when he wrote the novel. Published by The Bodley Head it had been rejected by five other publishers. Rankin never envisaged it as the first of a series. In fact he had thought about killing Rebus at the climax of the novel. If he had planned a series he would almost certainly have made Rebus younger than forty in the novel. Rankin was surprised to find out that others including his publishers thought he had written a crime novel. He envisaged it as an updating of Stevenson’s Dr Jekyll and Mr Hyde and a work closer to Muriel Spark in spirit than Ruth Rendell. The novel is surprisingly short at 168 pages particularly in comparison with later Rebus novels. Although Rebus is a heavy smoker and puffs away throughout the novel Ian Rankin has never smoked. The novel was not an overnight success and Rebus did not reappear until 1991 when a follow up novel “Hide and Seek” was published. The popularity of the novels built up slowly over the years. By 2015 around one in ten of all crime novels purchased in Britain was by Ian Rankin.

The Rebus novels are popular throughout the world and have been translated into 26 languages. We collect translations of Rankin’s work and many other modern Scottish writers. We have translations of works by Irvine Welsh, Ali Smith, Muriel Spark, Alasdair Gray, Val McDermid, J. K Rowling and many others. As well as showing the worldwide appeal of these authors and being of interest to students of literary translation they are fascinating for the striking images on the covers of many translations and the ways these differ from the English language editions we are familiar with. The Welsh language edition of “Knots and Crosses” was published in 1990 and is entitled “Chwerw’n Troi’n Chwarae”. The cover is a photograph of a plastic toy soldier pictured beside an open box of matches. The Danish edition is called “Blodbrødre”, in English “Blood brothers”, and has a disturbing drawing of a shadowy figure holding a rope approaching a child in bed on the cover. Perhaps most disturbing is the sinister looking toy cat with prominent claws pictured in the foreground of the drawing. Those inclined towards nightmares are advised to avoid looking at this edition. We also have editions of “Knots and Crosses” in Italian, Dutch, Finnish, German and a very attractive Russian edition. Pictured about are some translations of “Knots and Crosses” from our collections but not showing the scary cat toy. You can explore the world of Rebus and the works of Ian Rankin both in English and translation at the National Library of Scotland and perhaps have a look at the scary cat if you are feeling brave.