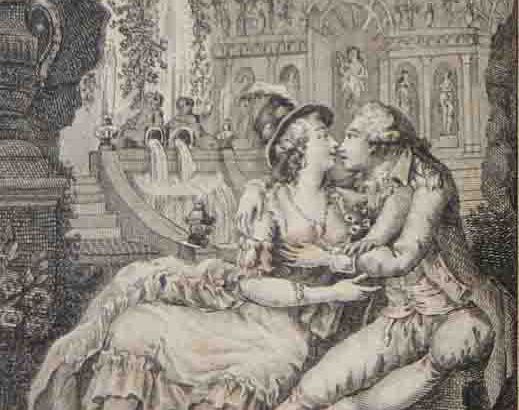 My name is Sarah Hutcheson. I’m currently completing an internship within Rare Books Collections as part of my MSc in Renaissance and Early Modern Studies at the University of Edinburgh. I have spent most of my time here at the National Library working on the Provenance Project, researching and identifying the previous ownership history of rare books from the library’s collections.

As an intern in Rare Books Collections, I’ve come across some amazingly interesting texts and inscriptions, as well as the intriguing historical figures who wrote, gifted, or owned these books. One book combined unusual content with a colourful cast of characters, so I thought I’d share it with you all. My work focuses on manuscript inscriptions within books, and in this case it all kicked off with a particularly amusing inscription found on the flyleaf of a slim volume from 1775 entitled Ranger’s Impartial List of the Ladies of Pleasure in Edinburgh, With a Preface by a Celebrated Wit. Edinburgh: Printed for the author. 1775. (shelfmark: Ry.II.g.23). It reads, “This book was purchased by Buchannan the bookseller in George St. at Constable’s Sale—and afterwards bought from him by me, principally on account of a Mrs, or Lady, Agnew, recorded p.35—my mother’s grand aunt, Lady Mary Montgomerie, married in to the Lochnaw family; so I wished to possess this precious memorial of one of my female cousins—but my mother, who knew two generations of the Agnews intimately, assured me that this statement is entirely false—she had never heard of any such woman—which she must have done, from her grandmother Lady Eglintowne, and other relations, had such a person existed. C.K. Sharpe, Edin: March 1840”.

Sharpe may well have termed it a “precious memorial”, as the entry on Lady Agnew, nestled neatly amongst the other entries on prostitutes and loose women of Edinburgh, is not flattering.

Ranger’s Impartial List takes its reader geographically through Edinburgh, giving short descriptions of the women to be found in each neighbourhood. The entries usually give each woman’s age and a brief physical description, whether she is good tempered or quarrelsome, and a few other notes about attributes, characteristics, or personal history. The preface contains a tongue-in-cheek defence of sex and the sex trade, calling the “volunteers of Venus” useful for the community since they encourage generosity and distract people like “factious malcontent[s]”, drunkards, and lawyers from causing their usual mischief.

The book was, according to another note by Sharpe, thought to be written by James “Balloon” Tytler (1745-1804), a perpetually bankrupt writer and balloon enthusiast who purportedly wrote hundreds of articles for the second edition of the Encyclopaedia Britannica on the upturned laundry tub of his washerwoman landlady (Oxford DNB). In Edinburgh in 1784, Tytler became the first Briton to (successfully) ride in a hot air balloon, and over the next few months designed and flew several balloons before crashing in front of a large crowd who’d paid to see his flight. After fleeing to England to avoid his debtors, returning and joining a radical political movement in Scotland, and being arrested and charged with seditious libel (he called the House of Commons a “vile junto of aristocrats”), Tytler finally left for Salem, Massachusetts, where he lived for several years before accidentally drowning himself while drunk.

We have no way of knowing who initially purchased the book, but it seems to have gotten around quite a bit within Sir Walter Scott’s circle. The note’s reference to Constable’s Sale may be to Archibald Constable (1774-1827), a noted publisher in Edinburgh best known for publishing Scott’s work, and his son David, who sold his book collection to raise funds after the family firm went bankrupt in 1826. The inscriber, Charles Kirkpatrick Sharpe (1781-1851) was also a colleague of Scott’s, as well as an antiquarian and collector. Sharpe’s collection extended beyond books and ballads, and included works by Hogarth and Holbein, Rembrandt and Reynolds, and the Lewis chessmen now in the National Museum of Scotland. He was an accomplished artist himself, and provided illustrations for several publications of the Bannatyne Club, Walter Scott’s literary publication society, of which both Archibald and David Constable were members.

Sharpe presented Ranger’s Impartial List to yet another Bannatyne Club member, James T. Gibson-Craig (1799-1886), in 1840. Gibson-Craig was a writer and a voracious collector—the sale of his enormous book collection in 1887-88 lasted 28 days. It was there that the book was acquired by Archibald Philip Primrose, 5th Earl of Rosebery (1847-1929), another avid collector and politician. Liberal prime minister in the 1890s, Rosebery was dedicated to reforming Lords, averting war, and protecting the empire. A reference to Rosebery in Oscar Wilde’s trial, combined with rumours of his own homosexual tendencies, created a threat of scandal that ate away at Rosebery’s health and prompted his resignation in 1895. Much of his book collection, including Ranger’s Impartial List, was left to the National Library of Scotland, where it has been my enjoyable task to research and catalogue its provenance.

Engraved images taken from: Harris’s list of Covent-Garden ladies: or, New Atlantis for the year 1761. To which is annexed, The ghost of Moll King; or a night at Derry’s. London: Printed for H. Ranger, near Temple-Bar. MDCCLXI [1761] Shelfmark:  Dur.163(1)