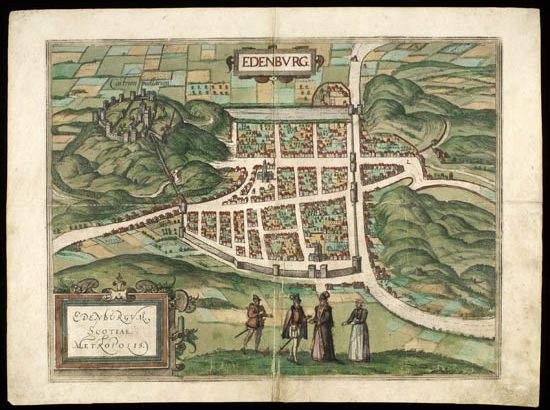 The first map of the month for You are Here the National Library of Scotland’s exhibition of maps is Edenburgum, Scotiae Metropolis, which will be on display until the end of August. This attractive birds-eye view of Edinburgh was engraved around 1582 by Franz Hogenberg, for inclusion in the Civitates Orbis Terrarum edited by Georg Braun. The Civitates sought to provide a comprehensive atlas of towns and cities of the world, and its six volumes include 546 prospects of (mostly European) towns.

The inclusion of Edinburgh within the Civitates reflects something of its importance amongst European cities of the 16th century. Although a fine birds-eye view of St Andrews was drafted in the 1580s, perhaps for possible inclusion in the Civitates, Edinburgh was the only Scottish town included in the published atlas. This would have been the image of Edinburgh known across the continent for many decades.

The view was designed to provide an attractive image of Edinburgh as a European city, rather than an accurate plan. Dominated by a hilltop castle, the view shows a regular street plan, neatly enclosed by city walls, and surrounded by empty fields. The burgh of Canongate to the East of the city walls is shown, including the Girth Cross, but both the Abbey and Palace of Holyrood are oddly missing from the map. Yet the description of Edinburgh in the Civitates notes: “On the side of the city to the East lies a majestic monastery to the Holy Cross, alongside it a royal palace set within an exceedingly charming garden.”

The Braun and Hogenberg plan is based on a view of the 1573 siege of Edinburgh, published in Raphael Holinshed’s Chronicles of England, Scotland and Ireland in 1577. This may explain the omission of Holyrood Palace. The siege did not extend as far East as Holyrood Palace, and the East-side of the plan of the siege cuts off before the palace. Although Braun and Hogenberg extended the area covered by their plan Eastwards, they did not reinstate the palace.

The text published in the Civitates provides a flattering description of Edinburgh and its surroundings, including some historical information. It is based on a description by Alexander Alesius, published in Sebastian Munster’s Cosmographia in 1550. On the map, Edinburgh Castle is labelled Castrum puellarum and the accompanying text explains that it gained the name “maiden’s castle” as “it strictly guarded the daughters of the Kings of the Picts, to keep them secure until the time that they were ready for marriage.” An alternative suggestion for this nickname is that it refers to the entourage of Mary Queen of Scots, as the Holinshed plan was published during her reign.

A final point of interest is the prominent inclusion of four figures in the foreground of Braun and Hogenberg’s plan. Similar figures appear in many of the views in the Civitates Orbis Terrarum. Georg Braun stated that including human figures in the foreground of his plans would deter the Turks of the Ottoman Empire from scrutinising his plans too closely for military secrets, as their religion forbade them from viewing representations of the human form.