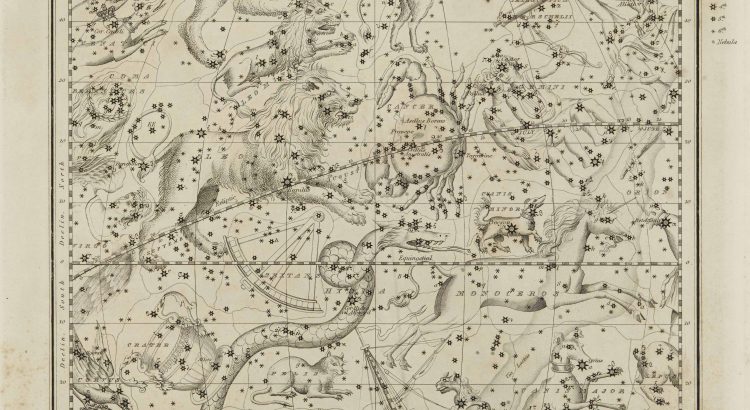 As the sun sets earlier and the nights are getting darker, now is the perfect time to look to the skies and locate different constellations. This would be impossible for the amateur astronomer without a handy constellation guide like Middleton’s Celestial Atlas.

Middleton’s Celestial Atlas was published in 1842 and has five sets of charts showing all stars visible from Great Britain. The first set of charts depicts the polar constellations and the other four remaining maps present the stars of each season.

Each set of charts consists of a map with hand-drawn, lightly-coloured constellation figures beside their corresponding maps of the stars. The constellation plates are particularly fascinating as the atlas was published in a time of transition as astronomy broke away from its former link to astrology

Middleton was an enthusiastic teacher and his atlas was published at the bequest of his students. He strongly believed in teaching astronomy to everyone.

“…A knowledge of astronomy…particularly of the fixed stars, should form the part of every system of liberal education…”

Middleton (Preface to the Celestial Atlas)

Middleton was aware of the ability of pictorial maps to capture the imagination of the learner and enhance their educational experience. His pictorial charts play homage to many famous legends such as the story of Callisto and her son, Argo the ship and possibly even Cerberus.

The story behind Ursa Major and Ursa Minor

Callisto and her son are represented by Ursa Major and Ursa Minor (shown in the page from the Celestial Atlas below).

In the story, Callisto is a successful hunter whose beauty enrages the Queen of the Gods (Juno).  Callisto soon marries and has a son called Arcas.  When Callisto visits the forests she meets a still enraged and jealous Juno who quickly transforms her into a brown bear.

Years pass and there is no sign of Callisto. Arcas grows up to be a successful hunter like his mother. Whilst out in the forest, he spots a brown bear and aims to shoot unaware that the bear is his mother. Just in time, Jupiter (Juno’s husband) intervenes and turns Arcas into a brown bear too. He seizes both bears by their tails and hurls them into the sky where they take the place of Ursa Major (Callisto) and Ursa Minor (Arcas).

Argo was the fifty-oared ship that Jason and the Argonauts famously sailed from Iolcos to Colchis. Jason was the son of the King of Iolcos (Aeson) who was overthrown by his half-brother (Pelias). To protect Jason from Pelias, his mother sends him to be educated by the centaur Chiron on Mount Pelion.

Many years later, Jason returns to Iolocos to reclaim his right to the throne. Pelias promises that we will give the throne to Jason when he returns with the Golden Fleece (aware that the quest is almost impossible). Jason assembles his crew (the Argonauts) to sail the legendary ship to Colchis.  After many adventures, Jason and the Argonauts arrive in Colchis to be given three tasks from the King of Colchis (Aeëtes): plow a field with fire breathing oxen, sow teeth of a dragon into a field (these grow into stone warriors) and retrieve the fleece (guarded by a fierce dragon).

Aeëtes’s daughter helps Jason: she provides him with a salve that protects him from the oxen’s fiery breath, she advises him to throw stones at the stone warriors so they attack each other and she helps put the guardian dragon to sleep. Jason retrieves the Golden Fleece but Aeëtes is angry and feels betrayed so orders his soliders to kill Jason, but Jason manages to escape and returns to Colchis.

Argo Navis is now obsolete as the constellation has been divided into three parts: Vela (the sails), Puppis (Poop Deck) and Carina (the keel and hull).

Canis Major contains the brightest star (the binary stars: Sirius A and its dwarf Sirius B). Thousands of stories from many different cultures are attributed to Sirius (possibly due to its visibility).

One of the story assigns Canis Major to the three headed Cerberus. Cerberus was a guardian of the underworld belonging to Hades.  Cerberus appears in the story of the twelve labours of Hercules.

The capture of Cerberus is the last of the twelve labours given to Hercules. The labours were commanded by Eurystheus as atonement for Hercules killing his own family whilst in a state of temporal insanity. After traveling to the underworld by a secret cave located in Teanarum, Hercules meet Hades who vowed that Hercules could take Cerberus if he could capture him without using a weapon. Hercules was able to overpower Cerberus and present the three -headed dog to Eurystheus, thus completing his 12 labours.

In ancient Egypt, Canis Major represented Anubis the god of embalming and funeral rites. Like Cerberus, Anubis is also a guardian to the underworld and is often depicted as a man with a jackal’s head.

Another representation in China is T’ien Lang (the celestial jackal). T’ien Lang is seen as a rabid jackal who destroys a Chinese king’s farmstead. T’ien Lang was hunted with a short arrow and bow. The arrow and bow are seen as pointing directly at T’ien Lang (or Sirius).

In 1799, cat enthusiast Jerome Lalande insisted on featuring a cat amongst the constellations. He wrote to Bode (author of Uranographia 1801) requesting the addition of Felis. Felis consequently first appeared in Bode’s Uranographia.

Middleton’s Celestial Atlas can be seen in our “You are Here” exhibition during October. ‘You are Here – A journey through maps‘ runs until 2 April 2017. Entry is free.