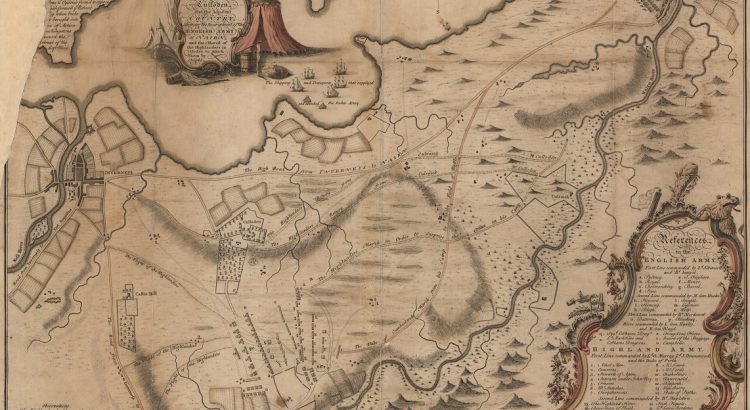 John Finlayson’s plan of the Battle of Culloden

November’s Map of the Month is a plan of the Culloden battlefield, probably created in 1746 by John Finlayson. Finlayson was a Jacobite sympathiser who fought in Charles Edward Stewart’s army, and this means that we need to view his map with a sceptical eye as he may have allowed his political allegiance to sway, deliberately or subconsciously, how he portrayed the battlefield. Whilst the mapping of the battle appears to be a true representation of what actually took place, the inset text is filled with observations as to why the Jacobites, in his view, were defeated; from lack of food and sleep, to being greatly outnumbered. Additionally, symbolism on the map again highlights his Jacobite allegiance – the thistle is broken in two, and the tip of the unicorn’s horn is missing. Time has taken its toll on the plan, with the top left corner torn away. A complete version is held by the National Archives in London.

At the end of the 17th and beginning of the 18th centuries there were a series of risings by Jacobites, supportive of the deposed King James II and VII, and his heirs. In 1745 Charles Edward Stuart, descendent of James, made his way to Scotland, with a consignment of muskets and broadswords, and the intent to raise an army in an effort to reclaim the throne for the Stuart dynasty. Charles landed at Eriskay on 23rd July and two months later his ever-growing band of supporters entered Edinburgh unopposed (although they never captured Edinburgh Castle).

The first of three major battles between the Jacobites and Hanoverian government forces took place at Prestonpans, with the latter routed around the walls of the magnificent Preston House. The Jacobite forces then took to the road, heading south for London. They ventured as far south as Derby, but with the throne almost within touching distance the decision was made, in the face of growing military opposition between them and their goal, to head back north. The movements of the Jacobites can be seen in another of Finlayson’s maps, drawn whilst he was in prison. After a series of skirmishes and sieges, the two armies met once again, in January 1746, at Falkirk. Once again the Jacobites triumphed.

But the Jacobite army was tired, hungry and vastly outnumbered. By mid-April they were ensconced around Culloden Moor and on the morning of the 16th the two armies met in what was to prove the final, and decisive, battle. The Jacobites took the full force of the government’s artillery before eventually charging. After being slowed by boggy ground they eventually reached the government line, only to be met by grapeshot, a deadly mass of packed metal balls that would spread outwards upon firing with the intent of killing and maiming multiple opponents.

The battle continued, but all was lost for the Jacobites and they began to retreat. Given no quarter by the leader of the government forces, the Duke of Cumberland, many were put to death in the days after the battle, whilst others were taken south, to be tried for treason.

Plans of the battles of Culloden, Falkirk and Prestonpans

One of the great problems faced by the government forces was the inability to move freely around Scotland’s roads due to the lack of a detailed map of the country. As such, in 1747, William Roy was engaged to survey Scotland. This he did and the result was his Military Survey.

The style of Finlayson’s map is very typical of that used for centuries afterwards to depict conflicts – oblong blocks depicting distinct army groups, with the detail of the groups inset. Almost 200 years after Finlayson laid out the Battle of Culloden, Samuel Rawson Gardiner, in his book A School Atlas of English History  was using the same style to teach children how battles were fought through time, including the Battle of Bannockburn (1314), the Battle of Dunbar (1650), and the Battle of Waterloo (1815).

The National Library of Scotland holds many books depicting battle plans. Some of the finest are:

Revolution: Mapping the Road to American Independence 1755-1783, by Richard H. Brown and Paul E. Cohen (see our blog about this book)

Historical maps of the Napoleonic Wars, by Simon Forty and Michael Swift

The Hutchinson atlas of World War II battle plans: before and after, by Stephen Badsey

Mapping the Second World War: the key battles of the European theatre from above, by Michael Swift and Michael Sharpe