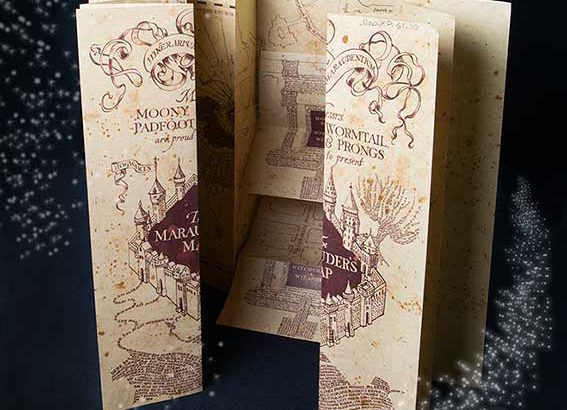 I solemnly swear that I am up to no good!

J.K. Rowling’s magnificent imagination conjured up the Marauder’s Map of Hogwarts Castle. This magical map is usually disguised as a blank piece of parchment, activated by the spell above. Once unlocked, the map reveals a detailed plan of Hogwarts, covered in named, moving dots which represent its inhabitants. It reveals secret passages and the passwords for them, and can see through disguises to correctly identify anyone moving around the castle. This magical piece of cartography was of great assistance to Harry Potter and his friends in their adventures.

A replica of the parchment Marauder’s Map used in the Harry Potter films is the December Map of the Month in the National Library of Scotland’s You are Here exhibition.

There is a rich history of the creation of maps of fantasy worlds, or the adaptation of maps of real locations to include the homes or journeys of imaginary characters. The Library acquired in 2011 Cartes géographiques pour les oeuvres de Sir Walter Scott. This rare atlas of 28 maps, published in 1828, was intended to accompany a complete set of Sir Walter Scott’s novels, and show the journeys of his protagonists.

Arthur Ransome drew maps to accompany his Swallows and Amazons series of children’s book, which were based on real locations, but annotated and updated to reflect the adventures of his characters. Other examples in our collection are far more fantastical. One of the first maps many children discover is E. H. Shephard’s enchanting plan of  Winnie the Pooh’s home in Hundred Aker Wood. Complex fantasy realms are richly rewarding for map makers, and the Library collection includes maps of George R. R. Martin’s the Lands of Ice and Fire and J. R. R. Tolkein’s Middle Earth amongst many others.

Of all the maps and atlases of imaginary places in the Library collection, one map above all was both the inspiration, and the key, to a great story. In the summer of 1881, Robert Louis Stevenson and his family were staying near Braemar. Stevenson began to draw a map to amuse his stepson, and describes how:

‘As I pored upon my map of “Treasure Island”, the future characters of the book began to appear there visibly among imaginary woods: and their brown faces and bright weapons peeped out upon me from unexpected quarters … the next thing I knew, I had some papers before me and was writing out a list of chapters.’

This enthusiasm produced ‘Treasure Island’, a thrilling tale of treasure hunting, double-crossing pirates, mutiny and adventure. The National Library of Scotland cares for the copper-plate used to print Stevenson’s map for the first edition of Treasure Island.

Sadly, however, the original manuscript map drawn in the cottage in 1881 was lost when it was sent to the publisher for engraving. Robert Louis Stevenson had to re-draw his map when the loss was revealed, and it is this second version which has been reproduced repeatedly in each new edition of Treasure Island.