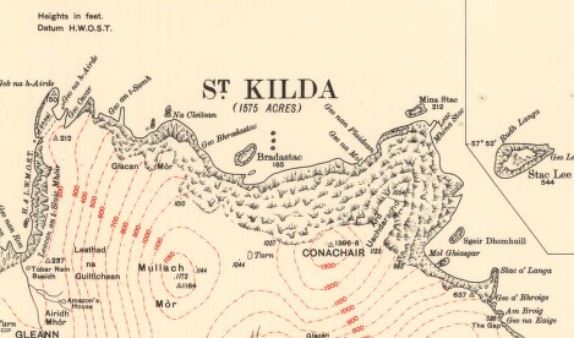 Our Map of the Month for August is the first detailed survey of St Kilda, published 1928. Although published by the Ordnance Survey, the surveying of this map was completed by a 73 year-old retired explorer and surveyor, assisted by a young geology student from the University of Edinburgh.

The remote archipelago of St Kilda lies 41 miles (66 km) west of the island of Benbecula, in the Outer Hebrides. The group consists of: the main island, Hirta, which was inhabited until 1930; the smaller islands of Boreray, Dùn and Soay; and the sea stacks Levenish, Stac an Armin and Stac Lee. Although the existence of these islands was long known to cartographers, their remoteness, and the challenging seas surrounding them, made it difficult to obtain detailed and accurate information about these islands.

St Kilda or Hirta had appeared on maps of Scotland from the 16th century onwards.

Regno di Scotia was published in the 1560s, and while there is a general confusion about the size and location of the Scottish islands on this map, “Hirtha” is clearly shown, beyond “Schia Levissa”.

Nicolas de Nicolay’s chart, published in 1583, shows a much more recognisable picture of the Hebrides, with “St Kilda” located to the west of Lewis.

Murdoch Mackenzie’s chart of the North Part of Lewis, published in 1750, helpfully included a sketch of how the islands of St Kilda would appear to sailors in clear weather.

St Kilda can also be seen on other early coastal charts and maps of Scotland in our collection, although often only its position is indicated, or a very rough sketch of an island group. https://maps.nls.uk/

John Mathieson and the Ordnance Survey

Scotland was mapped in detail by the Ordnance Survey between 1843 and 1882, with plans published at the scale of 6-inches to the mile (1:10560) for the whole country. The remoteness of St Kilda, and the great difficulties in accessing the islands, however, meant that the archipelago was not included in the survey.

It was not until 1927 that a detailed survey of St Kilda was carried out by the elderly Scottish explorer and surveyor John Mathieson (1855-1945), assisted by Alexander Murray Cockburn, a geology student from the University of Edinburgh. John Mathieson had retired from the Ordnance Survey in 1909 in order to serve as chief surveyor on the Scottish scientific expedition to Svalbard led by William Spiers Bruce, and followed this with other Arctic surveys.

In his account of the survey of St Kilda in The Scottish Geographical Magazine, (Volume 44, December 1928), Mathieson states that he had long wanted to survey St Kilda, but had to wait until he could find a colleague to assist, and to complete a geological survey. Through Professor Jehu of the University of Edinburgh, Mathieson was introduced to Alexander Cockburn, and together they spent May to August 1927 surveying St Kilda. Their work was supported by the Ordnance Survey, who supplied equipment and information to support the survey, including bearings to the highest point of St Kilda, taken from Benmore, South Uist. Cockburn then returned to St Kilda in 1928 to complete a geological survey of the islands, which was published in Transactions of the Royal Society of Edinburgh, 1935.

Carrying out the Survey

Mathieson and Cockburn’s first challenge was to measure an accurate baseline. An initial baseline was measured along the only flat stretch at the edge of the bay, and later a second base along the summits of Mùllach Mor, Mùllach Geal and Mùllach Sgar. Both a steel tape, previously checked by the Ordnance Survey, and a steel wire were used, and the measurements averaged. With the baseline established, they used triangulation, working out the related angles of a set of triangles to create a network of measured points across the islands, as shown in the diagram below. Theodolites were used to measure the angles.

Mathieson comments that the inland portion of the main island was easy to survey, however:

The coast-line is very difficult owing to the weathering of the granite and basaltic rocks into all kinds of fantastic forms, making it almost impossible to observe and fix the position of the water-line.

When it came to surveying Boreray, landing on the island proved challenging. Mathieson describes the boat being brought alongside steep rock. The most active of the St Kildans, with a rope around his waist, would watch until the boat rose with the waves, and leap ashore. Passengers then had to tie on a rope, and make a similar leap, assisted by the St Kildans. There was then over 300 feet of rock to negotiate before they would be safely on the island and could remove the rope. The rock cliffs surrounding Boreray can be clearly seen on their map.

On Boreray, Mathieson and Cockburn made use of the turf huts, which the islanders would stay in when shearing the sheep. They spent six days in a hut, with puffins occupying the roof by day, but at night “they and the stormy petrels entered the holes in the walls and made the most hideous noise, often during the whole night.”

Mathieson and Cockburn also had to endure some wild weather in completing their survey. Mathieson describes erecting poles for trigonometrical stations on the hills on a stormy day, with sleet and snow falling. The locals, however, were out barefoot among the rocks hunting seabirds, each having bagged 2 to 3 dozen puffins. Using meteorological equipment supplied by the Air Ministry, they compiled a complete weather record for May, June, July and August 1927. Mathieson describes how they experienced several gales during this time, including a particularly extreme one in August when the waves rose over the Dùn and Ruaival, with spray covering the whole island and destroying the crops of corn and potatoes.

Despite the challenges, the survey of the island was successfully completed, and a map based on their work published by the Ordnance Survey in 1928. As well as mapping the entire island group at the scale of 6-inches to the mile (1:10,560), the village was surveyed at the larger scale of 1:2,500, and is shown as an inset on the map.

Mathieson’s account of the survey for the Scottish Geographical Magazine also provides a fascinating insight into life on the islands, only 3 years before the inhabitants were finally evacuated from their wild and remote home.