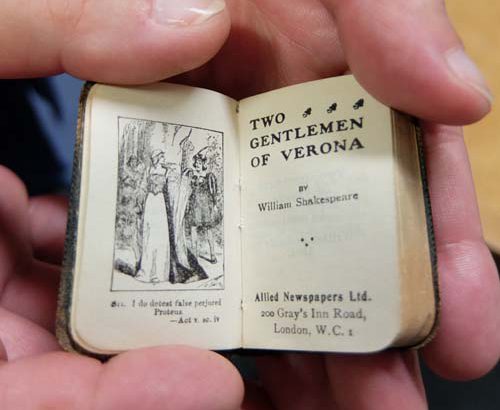 As 2016 marks the 400th anniversary of the death of William Shakespeare it was fortuitous that this summer the National Library was able to purchase a wonderful miniature edition of the Bard’s works. It is a 40 volume Complete Works of William Shakespeare printed in Scotland by Andersons Edinburgh Ltd. and  published by Allied Newspapers of London (FB.l.424). The individual volumes measure only 50mm in height and are printed in an easily readable 6-point typeface. They  feature marbled endpapers, illustrated frontispieces and are bound in a dark “imitation leather”(Rexine) with pale green lettering on the spines. The set comprises 38 plays each in its own volume, a single volume of sonnets and poems, and a final volume which contains a list of the plays, a glossary, and a biography. Each volume contains a summary of the play, a list of characters, and the approximate date of composition.

Although undated, the verso of the title page for the volume containing As You Like It states that it was “One of the plays chosen for presentation for the inauguration of the Shakespeare Memorial Theatre, Stratford-on-Avon, April 1932″. The complete set was initially offered as a gift for newspaper subscribers.

The Allied Newspaper set complements the National Library’s holdings of the miniature  Ellen Terry Shakespeare edition of the complete works published by David Bryce of Glasgow around 1904. The National Library owns both a 40 volume and a 20 volume (two plays per volume) edition of the Ellen Terry Shakespeare. An examination of the Bryce and Allied editions indicates that they used the same plates with the major difference being Bryce’s edition was printed on ultra-thin India paper whereas the edition from Allied Newspapers is on regular paper and thus each volume is twice as thick.

As an added bonus, the Allied Newspapers set was accompanied by several elegant miniature wooden bookshelves for display purposes. Both of the Library’s Ellen Terry Shakespeare sets are also accompanied by tiny furniture. The 20 volume set (RB.s.2757) is especially interesting in that the volumes are housed in a wooden replica of Shakespeare’s desk apparently modeled upon the original in a Stratford museum. A publisher’s sticker on the back states that it is made of oak (presumably from an artifact or pew) taken out of Holy Trinity Church, Stratford, where Shakespeare was baptized and buried.