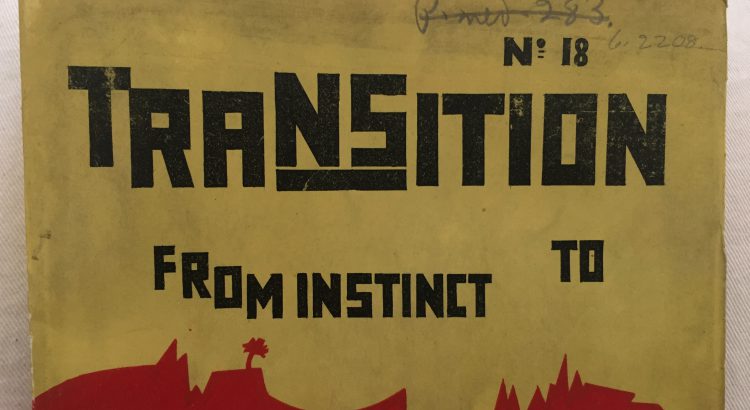 Dr Francesca Bratton (Durham University) recently completed her AHRC funded PhD on Hart Crane and the Little Magazine. She was a Library of Congress Kluge Fellow in 2013-14 and is currently teaching at Durham University and is developing a project on the roots of New Criticism in literary periodicals, and its consolidation in cultural and governmental institutions. Here she provides a brief introduction to modernist magazines and highlights key publications within the National Library of Scotland’s extensive collections of these rare and exciting objects.

Modernist Periodicals at the National Library of Scotland

Small circulation arts journals proliferated during the early twentieth century. Operating through complex transnational networks of editors, contributors, and publishers, magazines were instrumental to the development, reception, and international and local transmission of literature of the period. Immensely varied in their tastes, aesthetic tendencies, and approaches to editing and publishing, and often closely engaged with the visual arts and the new medium of film, these journals display the aesthetic characteristics of different strands of modernism at work in the literary marketplace.

Among Anglophone journals, of which the National Library of Scotland has an important, wide-ranging collection, New York’s The Dial and The Little Review aimed to present a catholic range of contributions, in contrast to other (usually more short-lived) journals more explicitly dedicated to a particular aesthetic. Analysing such periodicals, and clusters of journals, can not only shed new light on individual works, but can broaden what might be understood as the “modernist” aesthetic by uncovering its sub-strands. Aired in poetry, prose, manifestoes, editorials, and conducted through lively critical debates in and between journals, these different aesthetic approaches included the post-Decadent fashions of late 1910s Greenwich Village expressed in Bruno’s Weekly, The Pagan, The Quill, and Rogue, modelled after a previous generation of literary periodicals including London’s The Yellow Book (Figure 1);

experiments in Imagism appeared in early numbers of Poetry (Chicago), and The Egoist (London), while Wyndham’s Lewis’s Blast (London) declared its Vorticist manifesto for the arts in its first number, and was as much an art object as a literary magazine (Figure 2), and Secession, Broom (both based in a number of locations on continental Europe), and transition (Paris) promoted their distinct versions of ‘machine age’ modernism (Figure 3).

Reacting against the mass-market periodicals that had dominated ‘market forces since the late 1890s’ (and, implicitly, their mass readerships), as Lawrence Rainey observes, little magazines catered to small, sometimes coterie, publics (Rainey, p. 92). In the 1920s, Vanity Fair and The New Republic could sell 90,000 and 25,000 copies an issue, respectively, and a high circulation meant significant revenue from advertising. Avant-garde journals, however, with print runs generally between 500 and 4,000, tended to rely on the private wealth of their editors (The Dial and Broom), wealthy benefactors (The Criterion, financed by Lady Rothermere), or donations (Harriet Monroe’s Poetry. Circulation figures from Brooker and Thacker, p. 17). S4N, based at Yale University, began as an eight person writing group (which could only be joined with the agreement of two members of the existing clique) with its editor, Norman Fitts, transcribing copies of the issue for each member. As the early stages of S4N highlights, there was (to borrow Pierre Bourdieu’s useful phrase) ‘cultural capital’ in a low print run. While perhaps symptomatic of an aversion to mass culture, this also enabled a ‘direct relationship with readers’ (Rainey, p. 92), allowing these journals to be responsive organs for new, experimental work. In the case of T.S. Eliot’s London-based journal, The Criterion, its ‘initial print run of 600 copies’, writes Jason Harding, ‘marked the “implied audience” as fit but few: an elite of writers, critics and patrons of the arts’ (Harding, p. 349). As Gorham Munson, the founder and editor of Secession wrote in his retrospective article, ‘How to Run a Little Magazine’, a combative approach was another way in which these small circulation journals could exploit ‘cultural capital’ and manoeuvre within the ‘literary field’ (Bourdieu, p. 49). Speaking of his own journal’s on-going arguments with Broom and more widely read publications, Munson suggests that while ‘big magazines tended to avoid controversy’, ‘little magazines…revelled in polemics’. ‘Controversy’ was a marketing tool that was useful both in staking out the avant-garde position of the magazine in relation to more mainstream journals, and, as Munson wrote, attracted ‘writers with “names”’ who would ‘contribute if the controversy [was] sharp enough to draw them in’ (Munson, pp. 4, 14)

Such literary journals did not exclusively operate in national or linguistically determined vacuums, but cultivated mutually influential relationships with international publications. Tracing these interactions through advertisements, correspondents, contributions, and reviews can highlight transnational exchanges of literary ideas. For instance, Bruno’s Weekly was attentive to U.S., European and Middle-Eastern writing, Edgell Rickword’s London-based Calendar of Modern Letters regularly published U.S. poetry and criticism (Figure 4), Herbert Read’s ‘Foreign Reviews’ feature in the back-pages of The Criterion was consistently attentive to continental European and American journals, and Eugene Jolas’s Paris-based Anglophone journal transition (see Figure 5) and the Argentine journal Sur focused on a similar range of journals in their respective review pages, featuring adverts for The Criterion, La Nouvelle Revue Française (Paris), and Revista de Occidente (Madrid), among others. Indeed, the Alsace-born Jolas went as far as to advocate for a kind of literary Esperanto (‘a Eur-American philology’, as he called his ‘Revolution of the Word’), and his own poems mingled French, German and English.

Literary periodicals were the first publishers of many major modernist works. T. S. Eliot’s The Waste Land was first published in near simultaneous issues of his Criterion, and The Dial in their October and November 1922 numbers, respectively. Mina Loy’s ‘Love Songs’ first appeared in Others in April 1917, while Wallace Stevens’s ‘Thirteen Ways of Looking at a Blackbird’ appeared in the December number. Pound’s ‘In a Station of the Metro’ first appeared in Poetry in April 1913, and the first of his Cantos were published in the same magazine in June 1917, and W. B. Yeats was also a regular contributor to Poetry, with ‘The Magi’ printed in the journal May 1914. Langston Hughes’s ‘Christ in Alabama’ first appeared in North Carolina’s Contempo in a feature on the Scottsboro Trial in December 1932. James Joyce serialised Ulysses in The Little Review (which famously resulted in an obscenity trial) from 1918-1920, and Finnegans Wake in a number of journals including The Criterion, transition and the Transatlantic Review in the 1920s and 1930s.

As explored in my doctoral research Hart Crane and the Little Magazine (the first author study of its kind), combining textual criticism with an historical and sociological examination of Crane’s periodical networks can shed new light on his oeuvre through an analysis of the original publishing contexts of his poetry, and their ‘processes of transmission, including production and reception’ (McKenzie, pp. 12-13). This includes an analysis of aesthetic details, such as the overall character of the journal, its contributions and contributors, its literary and even artistic networks (see Blast’s ‘Signatures for Manifesto’ in Figure 6), distribution, print run, advertisements, etc. For instance, Hart Crane’s ‘O Carib Isle’, which offers in poetic paraphrase his concepts of poetic metaphor outlined in letters and essays, appears in a number of transition alongside Surrealist experiments with juxtaposed metaphor. Against the grain of extant critical studies of Crane which emphasis his Symbolism, research into the periodical context highlights the effaced debts of his poetic process to contemporaneous experiments of the European avant-garde, which are not otherwise apparent.

Harding, Jason, ‘The Idea of a Literary Review: T. S. Eliot and The Criterion’, The Oxford Critical and Cultural History of Modernist Magazines, I, ed. by Andrew Thacker and Peter Brooker (Oxford: Oxford University Press, 2009), pp. 346-363.