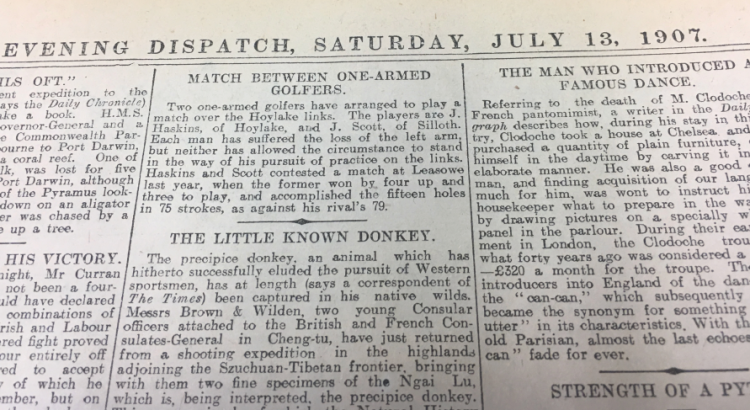 The National Library of Scotland’s newspapers collection is one of the largest in the UK and the largest in Scotland. Items range from the earliest newspaper printed in Scotland to online titles running to thousands of pages. And that was one of the reasons Edinburgh University Academy of Sport’s Summer School took the students attending the course to the Library, to help them understand the richness of our resources and the sheer scale of the newspaper collection.

One of the things which struck me about the students, however, and perhaps this should not have been a surprise, was the fact that when asked how they consume their daily news intake (sport or otherwise) not one of them admitted to consulting, never mind buying a newspaper.
When they visited the National Library, they discovered that in Scotland, newspapers became more established during the early 18th century and Edinburgh was the main centre for their production and consumption.

And this is a roundabout way of reaching the main thrust of this blog. Newspapers simply never cease to amaze in terms of their content and their excellence in revealing an enormous amount of detail about our past.

Two of the most enduring titles date from the 18th century were the ‘Caledonian Mercury’, published three times a week from 1720 to 1867, and the ‘Edinburgh Evening Courant’, 1718 to 1871. There was also the ‘Edinburgh Advertiser’ (1764-1859) and the short-lived ‘Edinburgh Chronicle’ (1759-1761). However, it is a more recent city paper, the Edinburgh Evening Dispatch, which attracted my attention. Even in a 1907 volume, contained a seemingly unending variety of items ranging from the trials and tribulations of other countries world wide to politics at home and in Ireland; reams of advertising and a not insignificant amount of sport, which often means horse-racing, but also encompasses a huge amount of bowling, cricket and rugby.
But perhaps the most surprising thing of all in relation to content, is the breadth of coverage, in Scottish terms, in a city paper. Here, by way of example are a number of stories which caught my eye in a single year, 1907.

Firstly, “A serious Accident” in that most far-flung of the western seaboard, the island of St Kilda. It was reported from Glasgow that a message had been received from the steamer Hebrides stating that the vessel had arrived at the island in the normal way and deposited two men of the cloth who were attending a communion service on the archipelago at the weekend. Almost by way of a pay-off, delivered in the starkest possible terms is the throw-away comment that “Since last visit a somewhat serious accident has happened to Rachel McCrimmon, familiarly known as “Old Rachael,” by falling over a precipice.” There must, surely have been more to it than that, but no detail is given.

On July 13, 1907 the Dispatch reported with scintillating sense of understatement, within the space of two columns and a few hundred words, four separate stories headlined thus; “Match between one-armed golfers, “The man who introduced a famous dance”, “The little known donkey” and “Match between one-armed golfers.” There was also an account of a Glasgow golfer who was killed by lightning in an “awful death”. The accident happened at Lethamhill golf course, Millerston near Glasgow, of which I had not heard.

In conclusion, I shall refer to a short court report relating to the “extraordinary behaviour of a Methil couple”. The cohabiting couple were sentenced to fifteen days each for having used some obscene language. But that was not the best of it. Baillie Condie added a further penalty of 40days on each, they having “pleaded guilty to having, the same evening, thrown goblets, jars, a basin, stones, and a live duck through [the abused woman’s] windows.”
Duck throwing is not a sport as far as I know, but the story proves my point. Newspapers never fail to surprise and satisfy one’s curiosity. Life’s rich tapestry is all there.