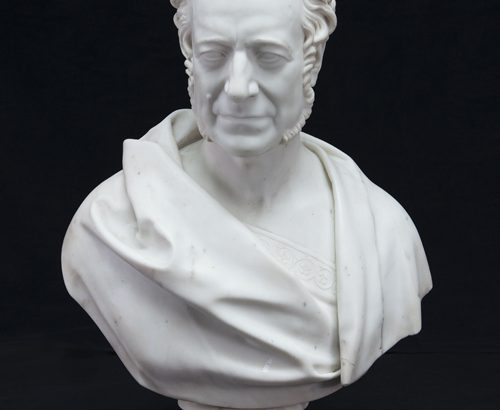 Recent visitors to the National Library of Scotland may have noticed two stern visages gazing down on them as they ascend the front stair. On February 7th, marble busts of Thomas Oliver (below left) and George Boyd (below right) were installed in flanking alcoves above the front information desk and above the café. Thomas Oliver (1776-1853) and George Boyd (died 1843) were founders and partners of the eponymous Edinburgh publishing firm which was established around 1807/08. From the 1820s until the 1970s they were based in Tweeddale Court off the Royal Mile and you can still see the old sign above the doorway of their former premises. They were an innovative firm because by the 1830s they were publishing, printing and bookbinding their books on their own premises. The company had a reputation for publishing educational, science and medical books. The National Library of Scotland holds the archive of Oliver and Boyd (Acc.5000) as part of its manuscript and archive collections. For more information on the archive see: https://www.nls.uk/catalogues/online/cnmi/inventories/acc5000.pdf The busts belong to the National Library of Scotland’s collection of artworks which presently numbers over a hundred paintings, drawings, sculptures, and maquettes. They were sculpted by the 19th-century Scottish sculptor and portrait artist Peter Slater (1809-1860). He was born in Edinburgh and developed an interest in working in stone through his father, John Slater (died 1816), a marble-cutter with a studio at the top of Leith Walk. Peter Slater began an apprenticeship with the Edinburgh sculptor Samuel Joseph (1791–1850) in 1823 and in 1829 he moved with Joseph to London where he stayed for four years. He was admitted into the Royal Academy in 1831 and his works were exhibited there in the years 1846-1870, and also at the Royal Scottish Academy between 1833-1865. Although he eventually moved back to Edinburgh and maintained a residence in the New Town, he returned to London in 1860, the year of his death.

Two of Slater’s more well known works are figures on the Scott Monument in Edinburgh: the philanthropist George Heriot (1563-1624) appears on the south-west buttress (depicted holding a model of George Heriot’s School), and the Lady of the Lake from Walter Scott’s poem appears as a central  figure on the south side.