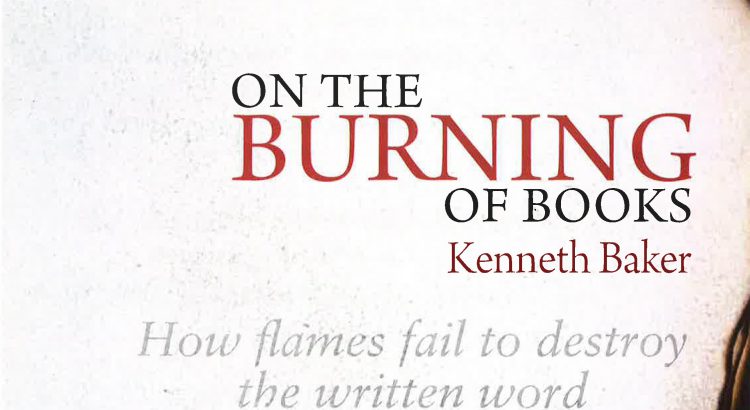 The burning of a book is a powerful action – especially when the act is carried out in public. The book may be burnt for many reasons but whatever the reason, it is a strong statement.

In On the Burning of Books, Kenneth Baker explores famous moments throughout history when books have been burnt for political, religious, or personal reasons.

Included among his research are stories from ancient China to the Nazis, from George Orwell’s Animal Farm to Salman Rushdie’s The Satanic Verses, from Chairman Mao to the Spanish destruction of the Aztec civilization.

Political leaders and dictators have used book burning to intimidate their opponents and inspire their followers.

The most well-known example in relatively recent history is the huge bonfire organised under the Nazi regime in Berlin on 10 May 1933.

The purpose of this is thought to have been as a means to cleanse and purify German culture and to send a clear message to the world that anyone who kept these works would be considered to be a traitor.

Joseph Goebbels, Nazi Minister for Popular Enlightenment and Propaganda, began an effort to bring German arts and culture into line with Nazi goals.The government purged cultural organizations of Jewish members and other officials alleged to be politically suspect or who performed or created art works which did not agree which Nazi ideology. Upwards of 25,000 volumes are believed to have been burnt. Libraries were ransacked and private collections were seized.

There are numerous example of religious burning of books throughout history.

A contemporary example is Salman Rushdie’s The Satanic Verses, which was burnt in Bradford, England as a warning to authors not to attack the Prophet Muhammad. A fatwa was issued against the author and he had to flee and live under guard for ten years.

Baker also describes the personal burning of books. Many writers have destroyed their own works or left clear instructions to their families or executors to do so.

Lord Byron’s publisher John Murray burned the poet’s memoirs in the fireplace of his house. Philip Larkin asked his secretary and lover to shred his diaries.

Instructions to executors can create difficult quandaries when it comes to deciding whether these should be followed or not.

Thomas Hardy’s executors followed his instructors to the letter but Max Brod, a close friend of Kafka who was explicitly told to destroy everything, refused to do so.

Baker also discusses burning as a result of war, where the destruction of books and libraries was not the purpose of the conflict but was collateral damage and accidental burning due to natural disasters such as earthquakes, hurricanes and lightning strikes.

In the final chapter, Baker discusses some examples of lucky escapes such as the aforementioned Kafka novels.

The book is a fascinating read and one which is sure to appeal to many of our readers.

Further details of On the burning of books can be found on our main catalogue.
(Photo credit: Unicorn Publishing Group. Picture shows the title and author of the book against the image of some pages which have been burnt and are curling at the edge)