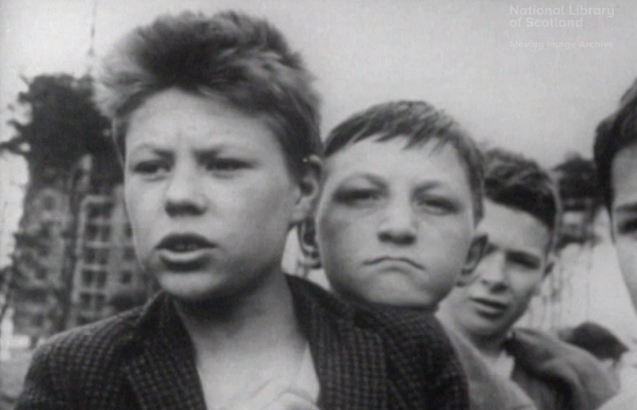 According to the enthusiastic narration on ‘Amateur Cinematography’ held by the Moving Image Archive, photography serves two distinct purposes; ‘first as a form of record and second as a form of art’.  This fascinating 3 minute film, shot in 1948, was made as a trailer for the 10th Amateur film festival held at the Cosmo Cinema, now known as the Glasgow Film Theatre. Featuring film heavyweights such as Alfred Hitchcock and John Grierson, both judges at the Festival, and showing details of the camera equipment of the time, the film states that for ‘the more ambitious, cinematography is even more satisfying’ than photography.  The films of the Moving Image Archive, held at the Kelvin Hall, offer us the chance to further explore the relationship between photography and film, and to find some of the magic that exists within it.

The Moving Image Archive goes a long way back, and photography features in the collection as early as 1898. ‘Photographic Convention, Glasgow 1898’ ,filmed by E.E Prestwich, shows members of the photographic convention, a meeting of professional and amateur photographers, on the deck of the Clyde steamer ‘Lady Rowena’.  A crowd of dapper men and women stream past the camera displaying a fairly extravagant selection of hats in the process. I did wonder if this display of high fashion and the thick plumes of cigar smoke were a further demonstration of the wealth needed to possess the camera equipment of the time so proudly displayed by the men and women featured here. Many of the crowd doff their caps, laugh and some even salute the camera capturing the scene. Despite being less than two minutes long this footage details a real sense of the excitement and camaraderie shown by those able to be involved in the relatively early days of photography.

One of the photographers captured in the crowd is James Craig Annan, a pioneering Scottish photographer from the Annan family who created the ‘T & R Annan & Sons Ltd’ photography business still in operation today. James Craig Annan’s father Thomas Annan was a highly respected photographer whose work has recently gone on display at a major exhibition at The J. Paul Getty Museum in Los Angeles, but remains somewhat under-appreciated in the city of Glasgow in which he made much of his work.

The Moving Image Archive is also able to show us that the roots of pioneering photography can be firmly traced back to Scotland, in the form of two films centering on the talent and sheer innovation behind the work of David Octavius Hill and Robert Adamson. Hill, a landscape painter, and Adamson, a chemist, met in Edinburgh in 1843.  Over the course of their partnership, the pair created a new form of the calotype, through printing by light on coated paper, and Scotland’s first photographic studio, ‘The Rock House’, on Calton Hill. The titles of ‘The Sun Pictures’ and ‘The Sunworshippers’* give some indication of the importance of light in the process and the way Hill and Adamson used light ‘in a way that other artists use colour on a brush’.  The films manage to convey the force of Hill and Adamson’s creativity and the results occurring when art and chemistry were brought together.  The films document the ways in which Hill and Adamson were successful in bringing photography to a much wider audience and show that the pair had a significant role in the transformation from photography being a private art to becoming a public one.  We learn of Hill and Adamson creating the first example of a photographic social documentary project many years before anyone else. The pair’s extensive collection of photographs focussing on a fishing village from Newhaven is the first example of a photographic collection of a working community and set the scene for social realism in photography. The narration of ‘The Sun Pictures’ describes the way in which Hill and Adamson placed photography ‘firmly in the mainstream of the visual arts, fit to be measured against the style of the masters’. Robert Adamson’s achievements in particular seem all the more remarkable given his untimely death at the age of only 26.

‘Dear Green Place’ *  captures the genius of Italian born Scottish photographer Oscar Marzaroli. Made in 1968 by Ogam Films, which  Marzaroli  was involved in creating, the film’s clever use of  soundtrack and commentary to fit the photographs being displayed adds depth to an already rich selection of Marzaroli’s work. Ewan McColl sings about seeing ‘a train set the night on fire’ from ‘Dirty Old Town’, as the film pans across an evocative image of a smoke billowing from a train leaving Glasgow Central Station.

The commentary, written by Alasdair Gray, describes the changes in the city being documented by Marzaroli ; ’a new kind of Glasgow is being built’.  The theme of our memories in a changing city runs throughout the film as the commentary states ‘the city that I grew up in is fast disappearing, already many of the places of my childhood exist only in my memory’.

Through the films mentioned, we are able to see that photography does indeed serve as a ‘form of record’ and as a ‘form of art’ at the same time. Through the Moving Image Archive we are able to learn of the pioneers who made photography into a public activity, see the passion felt for this new art form and discover the ways photography can be used to document our past and maybe even our future. Like the narration in ‘The Sun Pictures’ states ‘the potential of the new art was there, latent like all the images of the future’.

Access and Enquiries Assistant at The National Library of Scotland at Kelvin Hall, Glasgow.

All films are available to view at The National Library of Scotland at Kelvin Hall in Glasgow. More information and opening hours are available here.

*Some of the films listed are available to view online but the titles ‘The Sunworshippers’ and ‘Dear Green Place‘  can only be viewed on-site at Kelvin Hall.

More information about the photographic collections held by the National Library of Scotland can be found here.

The Herald Scotland Online. ‘Glasgow’s Thomas Annan to have historic photography at centre of major show in Los Angeles’.  (Accessed 19/5/17)