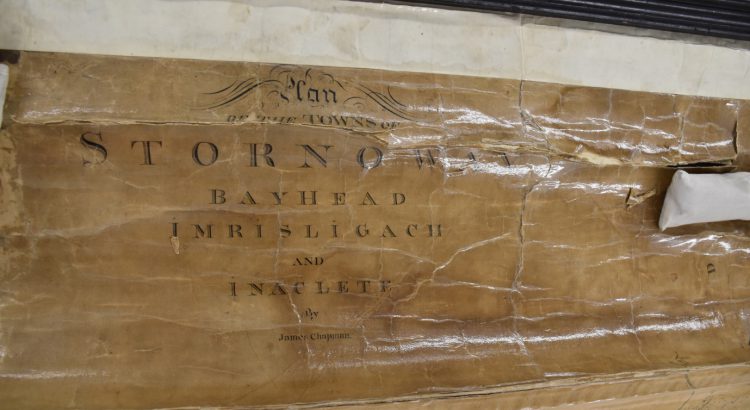 The ‘Stornoway Map’ is one of a group belonging to Stornoway Public Library, which were sent to the National Library of Scotland in 2017 for digitisation. However, this map could not initially be digitised due to its poor condition. It had been heavily conserved in the past, leaving the paper stained, skinned and distorted, with many large cracks, tears and losses. It had also been entirely covered in cellulose acetate lamination, making its surface very glossy. The Library successfully obtained funding from the Aurelius Trust to undertake the conservation work necessary for digitisation, and the conservation project began in September 2018.

The map is drawn in ink with areas of watercolour which may be hand-painted. The primary support is paper, backed with linen. The edges of the map have been sealed with a brown paper-based tape, which goes over the cellulose acetate lamination, and has a thinner, white cloth tape stuck on top of it (figure 1).

There are wooden batons tacked to the top and bottom edges of the map (figures 2-4). The baton at the top is stained black, and attached to the section of paper at the top of the map by 10 brass tacks. It is not possible to tell how far the map extends underneath this paper section. The bottom baton is stained brown and varnished, and held straight onto the map with 5 tacks. There is a single brass hook in the middle of the top baton. 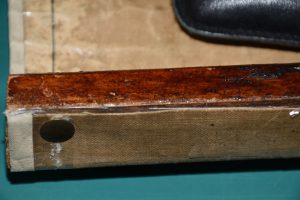 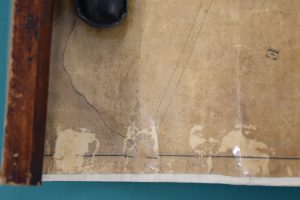 The map has been heavily conserved in the past with the addition of a thick white paper backing on the top third, which is folded over the top edge so that it extends slightly over the front of the map. There were two annotations on this backing: CHAPMAN’S MAP NOT DATED in black ink and NEVER ROLL THIS MAP TIGHTLY in red ink. There was also the previously mentioned cellulose acetate lamination covering all of the front. The evidence suggested that the surface of the map had been varnished at some point, and that this had been removed before the map was laminated, leaving behind traces of varnish and brown staining (figure 5). It also looked as if the black line running along the edge of the map had been re-drawn in some areas.

The map was in very poor condition when it arrived at the Library. The paper backing was heavily creased and torn, and the linen backing was cracked and brittle. The top quarter of the map was in the worst condition, with three splits extending right across the width of the map, a further two splits extending across about a third of the map, and two vertical splits which were each about 20 cm long (figures 6-7). The top of the map was also heavily stained, probably due to water damage. 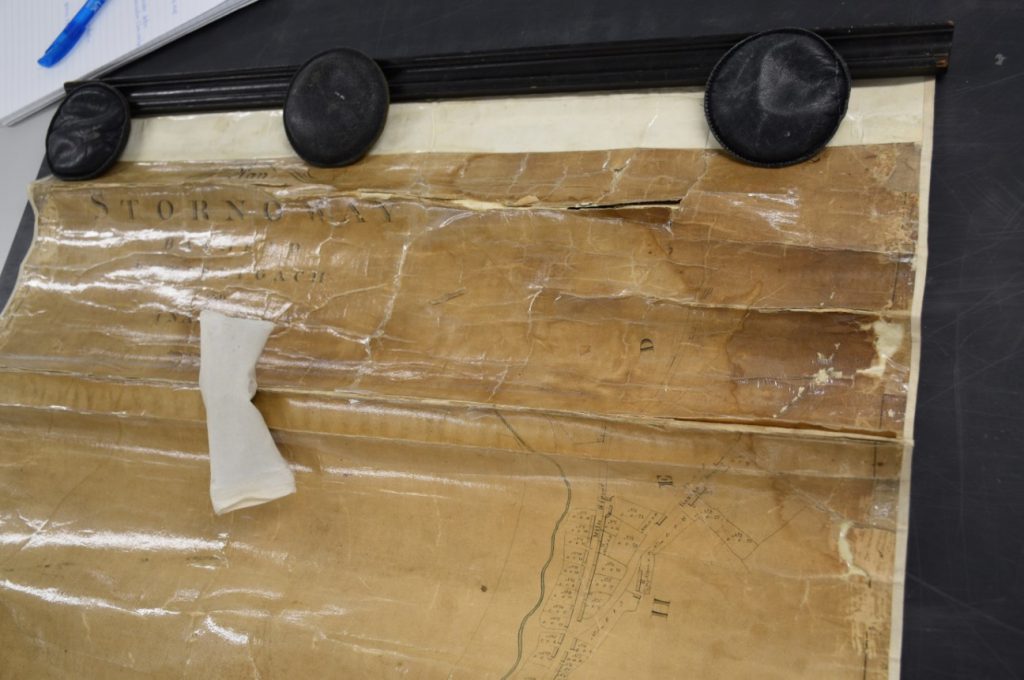 There were several losses from the primary paper support, and considerable skinning of its surface, especially along the long edges of the map. It is possible that the skinning occurred when a previous reinforcing layer was removed.

The proposal for conservation treatment is as follows:

Highlights of the treatment will be shown on Twitter (@NLS_CollCare), and we will also publish a second blog showing the map after treatment.