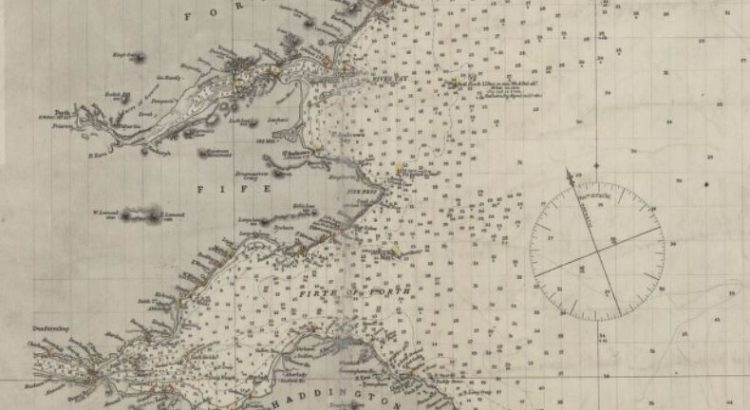 Have you ever looked at an Admiralty Chart and wondered how each of the sea depths were measured? What about before the invention of echo sounding devices?  What did an early oceangrapher use to calculate each fathom?

Prior to the early 19th century soundings were measured using a lead line system. A sailor would cast a lead weight attached to a line (typically made of hemp) and run the line through his hands. Some of the lines were marked and the linesman would shout the fathoms as it passed his hands.  It was fairly common to place tallow or grease on the end of the lead to collect sediment.

The 19th century experienced a thriving chart-making industry, primarily due to an increase in ocean shipping and passenger travel. Around 1850,  the first transaltantic telegraph cable was being laid with the goal to improve telegraph communications. The project required accurate depth measurements, as a miscalculation would lead to expensive dredging to retrieve the damaged cable. Around this time, there were a lot of different recordings for the same area of sea. This problem with finding accurate measurements led to many patented depth sounding devices being created. Many inventors changed the type of wire (hemp, iron, copper and steel piano wires were all tested). Further inventions used a steam powered wrench to haul the sounding line back reducing the time needed to record sea depth. Typically a line sounding would be completed within 3 hours and the ship’s position needed to be accurately calculated during the sounding process.

Brooke’s sounder was invented in 1854. This device was widely used by the Hydrographic Office from the 1850s onwards (albeit with various modifications on the original design). Brooke’s sounding device consisted of a heavy lead weight or shot with a hollow core where the metal rod would be inserted. The shot was secured by a sling that released the shot when the line became slack. The metal rod would collect a sample from the sea bed. Removing the shot lightened the line and eased the process of retrieving the line after the sounding was complete.

Baymen was concerned that a slack line may leading to an inaccurate reading. He created a system with a heavy weight was used and this rested on the sea bed. The line was pulled taut until it broke.

Thomson’s sounding machine replaced the hemp wire with piano wire and set the line in a system of tension wheels and brakes (see below). The machine allowed readings to be taken faster and more accurately. Readings could also be taken whilst the ship was moving.

The sinking of the Titanic and the onset of WWI accelerated research into echo sounding. In 1919, French scientists were the first to successful obtain a line reading from echo sounding. The first commercially available fathometer was patented in 1925. In the 1950s, great progress was made in transductor technology and timing accuracy. This aided the invention of the Precision Depth Recorder which used a high frequency sonar pulse.

Further information about the Map Library can be found here: http://www.nls.uk/using-the-library/reading-rooms/maps