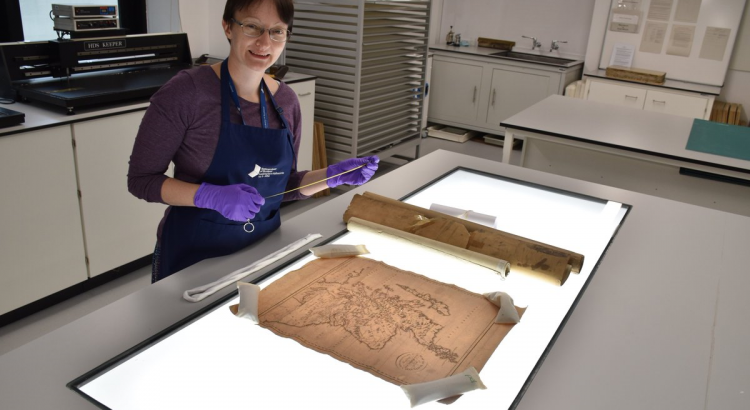 The National Library of Scotland is committed to safeguarding the country’s cultural heritage so that future generations can enjoy it. The Collections Care team is responsible for preserving and treating the Library’s collections (from medieval manuscripts to modern magazines… and everything in-between). The team includes three books conservators, a paper conservator, an exhibitions conservator, two digitisation conservators, a technician, a registrar, a collections audit officer and the preservation services unit (which manufactures archival-quality boxes and folders). Our work is directed by the Head of Collections Care. Our goal is to protect the Library’s collections, whilst making them accessible to the public via our reading rooms, website and exhibitions programme.

In August, an initiative called #RescueMe was launched. This project is the brainchild of Exhibitions Assistant, Sarah Wilmott. She suggested that the public vote for one of three different collections, all of which have been scheduled for repair in the conservation workshop. Conservation is one of the few professions where inconspicuous results are considered more successful than noticeable ones. Much of the time, our work is done away from public-view. However, advocacy is an increasingly important part of our role. We are passionate about what we do, and we want the public to be passionate about the conservation of collections too. This project was designed to enable the public to engage with our work, by showing what goes on behind the scenes. The collections were put on display in the Library’s entrance hall, so that the public could examine them pre-treatment, “warts and all”. A post-box polling station was installed, and an online survey set up. When voting closed, the winner was “Geological charts”, which pipped the other collections to the post… or rather, the social media platform.

I came across these charts whilst carrying out a condition survey in the Maps Strongroom. (We undertake surveys to evaluate the needs of the collections and establish treatment priorities). These rolled charts were in a cardboard box marked “Bill to place”, along with several other maps and plans. Curiosity piqued, I pointed out my find to Maps Curator, Paula Williams. She told me the collection had been donated by the National Museums of Scotland in 2010, and the assortment of charts catalogued but not shelf-marked. As they had been rolled up for a long time, they were too distorted and springy to be placed inside a plan chest, leaving them in a kind of storage limbo.

A former colleague had been in the process of sorting through these charts when he retired – hence the label “Bill’s box”. For preservation purposes, flat storage is always preferable to rolled storage, and rolled storage is always preferable to folded storage (unless unfolding and/or unrolling would compromise the physical or contextual integrity of the item). Paula was keen to have the plans cleaned and flattened so that they could be rehomed in a plan chest and given a corresponding shelfmark.  Therefore, I created an inventory for the box, and transferred it to the conservation workshop so that I could assess and treat the contents. The goal was to prevent them from being “stuck between a rock and a hard place”. The open box was located on the floor, exposed to the Library’s sprinkler system. However, if the plans had been placed in a drawer (without treatment) they could have become damaged as a result of the planar distortion. 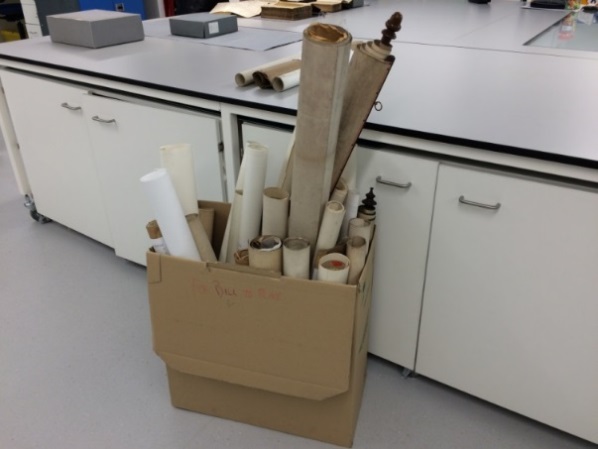 I carefully unrolled and assessed each item, using bag-weights to anchor the springy corners. I used an Access database to capture information about the size, format, material composition and condition of each item. I ‘batched’ the rolls according to treatment requirements. Those without wooden rolling batons, small enough to fit inside a plan chest, were flagged for remedial treatment. Those with batons, and/or those too large to fit inside a plan chest, were set aside for cleaning and roller-friendly rehousing. The remedial treatment of ‘batch 1’ involved surface cleaning, solubility testing, ultrasonic humidification and pressing under weighted boards. Edge tears and losses were repaired with Japanese tissue adhered with wheat starch paste. Flexible magnets, interleaved with blotting paper and non-wove polyester, were used to keep the repairs flat during drying. Stains were reduced using swabs (lightly soaked in water, alcohol or acetone). Finally, for support and added protection, each item was rehoused in a polyester sleeve. The sleeves were then placed into a large portfolio case and couriered back to the Maps Strongroom. Conservation intern Rosie Shepley assisted me with the process. Together we treated thirty-eight maps and plans. However, three of the most interesting charts (all exhibiting commonly encountered conservation issues) were set aside for inclusion in the #RecueMe project.

The selected charts form part of the Geological Survey of Scotland. They once belonged to the Museum of Natural History at Edinburgh University. They were rolled up inside a brown paper wrapper labelled “Old Geological Maps… these came to the Museum along with the collections of the Old University Museum. They are perhaps due to Jameson (?)”.

The smallest plan is titled “Map of Scotland Engraved for the Outline of the Mineralogy of the Scottish Isles”. Dated 1813, and engraved by J. Menzies, the map was drawn by Scottish mineralogist Robert Jameson (b.1774 – d.1854). The delicately applied red lines are thought to depict Jameson’s travels throughout Scotland. Born in Leith, Jameson became an eminent and influential professor at Edinburgh University. During his tenure, he was responsible for the University’s natural history collection. He went on to establish the Wernerian Natural History Association, and it was here that Charles Darwin attended a lecture by the American naturalist and painter John James Audubon. In his teenage years, Darwin attended Jameson’s natural history course at Edinburgh, where he learned about stratigraphic geology and assisted with the collections of the Museum of Edinburgh University, then one of the largest in Europe. 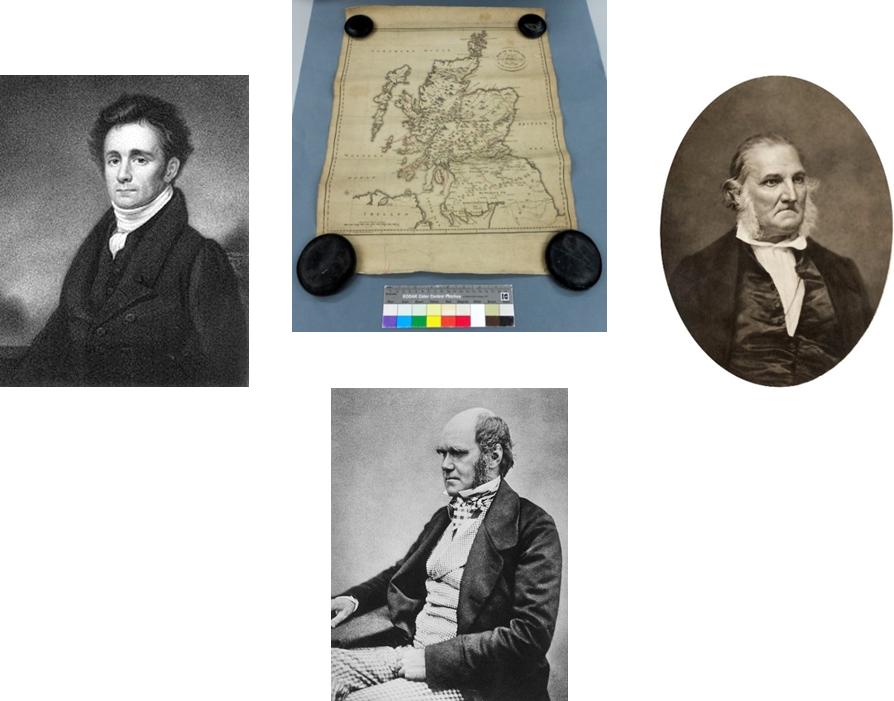 The middle-sized chart below depicts a topographical view of the Campsie Fells, with associated geological strata in section. It was devised to accompany the paper “A geological account of the southern district of Stirlingshire…” by Lieutenant Colonel Imrie, in “Memoirs of the Wernerian Natural History Society, Volume 2”, p.24-50 (Edinburgh, 1818). 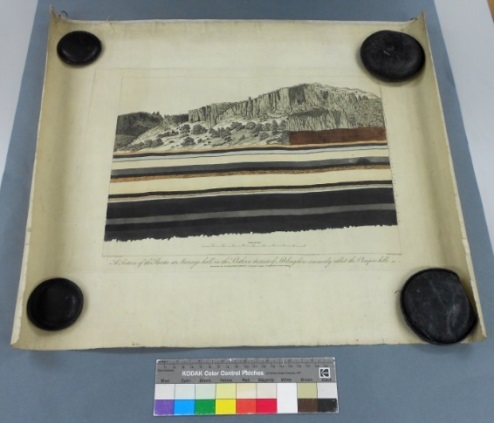 The largest plan (plan 3, below) depicts sections of the Edinburghshire and Haddingtonshire coalfields, as arranged by Henry H. Howell. Produced in Edinburgh, it was engraved by J. W. Lowry, and published in 1863 by the Geological Survey Office. 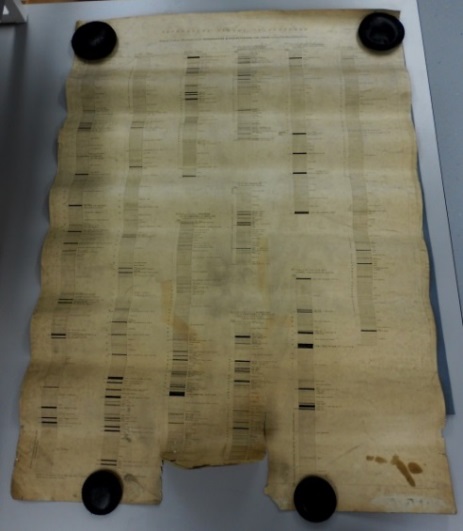 The charts were printed on medium-weight wove paper. However, the type of pulp and fibre furnish appears to be different in each case. When plan 2 was viewed over the light table, the watermark ‘Fellows 1812’ could be seen. The other charts have no watermarks. In each case, the media is comprised of black oil-based printing ink. Plans 1 & 2 were coloured by hand using watercolour. All of the charts are covered in a layer of surface dirt, and all exhibit some stains. The supports of plans 1 & 2 are supple, but they are also discoloured and somewhat creased. The damage is likely to have been caused by a combination of inherent chemical reactions, environmental factors and historic use. The largest plan is more brittle. It has two long tears extending from the lower edge, and several small losses. A previous attempt was made to repair the tears with sticky tape (always a tricky conservation problem). Most of plastic carrier has fallen off, and the adhesive layer has migrated into the support resulting in some tenacious-looking stains. The charts are distorted and ‘springy’ because they have been rolled up for a long time. The largest plan is particularly distorted because the roll had become squashed inside the cardboard box. The surface is now undulating, making it difficult to read. Each of the substrates has ‘bumped’ edges, and numerous handling indentations. However, for the most part, the media is in good condition. 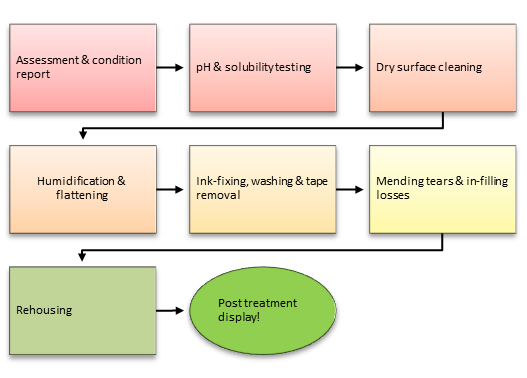 Over the coming weeks, I’ll be posting updates about the treatment of the geological charts, via Twitter and Instagram. Look out for my updates, photographs and video clips every Friday, between now and the beginning of December – when they will be re-displayed and ready for inspection. Follow us, and the geological charts, @NLSColl_care and @natlibscot using the hashtag #RescueMe.