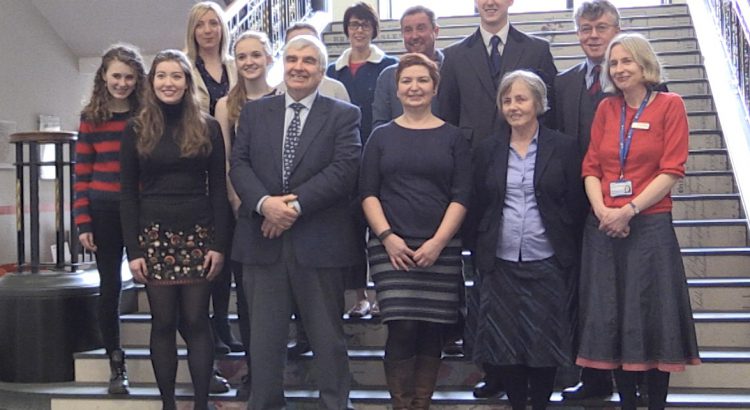 From March 2016 to March 2017, the Library’s Conservation Unit undertook an ambitious project to conserve an extremely fragmentary map, resulting in unprecedented amounts of publicity. The map, known as the ‘Chimney Map’ because it was originally thought to have been found inside a chimney, was discovered during renovations at a house in Aberdeenshire, and donated to the Library in 2007.

During the conservation project the Library got in touch with Dr Esther Mijers, who is a Lecturer in Scottish History at the University of Edinburgh, focussing on seventeenth century Britain and the wider world. Esther made many useful suggestions about the origins of the map, and proposed it as a mini research project for four of her first year undergraduates: Emily Hall, Amy Holiday, Sarah Thew and Julia Weingaertner. Relations between Scotland and the United Provinces

In the 17th century, there were many connections between Scotland and the United Provinces, especially with the port-city of Rotterdam. There had been a steady stream of merchants arriving in the city, and in 1643 a Scottish Church (Kirk) was founded there, which quickly became a hub for Scottish merchants and, in the 1660s and 70s, for exiles. The latter had fled the Restoration monarchy for religious reasons. Unhappy with the regime of Charles II and his brother James VII & II, they rallied round the Dutch Stadholder William of Orange, and his Stuart wife, Mary II. In the late 1680s, there were estimated to be over 1,000 Scots living in Rotterdam. Many lived in the poorer areas and did not really integrate into  Dutch society. The exiles returned to Scotland in 1688, during the ‘Glorious Revolution’, where they were rewarded by William for their loyalty. Aside from merchants and exiles, significant numbers of Scots also went to the United Provinces for other reasons, most notably for their university education. Leiden was especially popular. Less politically engaged than the exiles, the merchants and students were a steady presence in the United Provinces well into the eighteenth century. There were some notable exceptions, however: the merchant Andrew Russell on occasion threatened to disrupt trade, causing real problems for the Scottish economy and the Restoration government. The Williamite regime also had numerous problems with enemies from within: the Jacobites rose repeatedly against William and Mary, and many of these also ended up in exile, though they tended to favour the Southern United Provinces (Flanders) and France over the United Provinces.

The main section of the Chimney Map, the central map of the world and varied ornamentation surrounding it, was created in the 17th century in the United Provinces, a global hub for skilled cartography at the time. Gerard Valck was one of many Dutch mapmakers influential in the trade during this period. He worked closely alongside his equally renowned family member, Pieter Schenk. Valck was an artist and publisher known for his engravings and mezzotints, along with prints of the properties of the Orange-Nassau family, and of course, his maps and atlases which he published himself.

The successful Dutch cartographers of this time period maintained a very collaborative relationship. The copper plates used to create the maps and their artwork were often shared by many different members of the trade. Sometimes, cartographers would inherit other artists’ plates and continue to use them to create great works. Valck, for example, was known to base much of his work on that of other Dutch professionals, including widely celebrated and imitated cartographers such as the Visschers. This brings up interesting questions of the Chimney Map’s origins and intellectual property to be explored through the context of the cartographers’ unique artistic methods and culture during this era. The map after conservation

The ‘Chimney Map’ is estimated to have been produced between the period 1690-94 and displays significant Protestant influences within its design, most notably within its decorative border. A number of cities are depicted in the cartouches, including Batavia, Mexico and Constantinople. The inclusion of Batavia is a possible nod to the Dutch origins of the map, as Batavia (now modern day Jakarta) came under Dutch control in 1619 and was the capital city of the Dutch East Indies. The city was at the center of Asian-European trade and was a key foothold in East Asia for the Dutch East India Company, where they traded in nutmeg, black pepper and cacao. Batavia was built on the site of the destroyed indigenous city of Jakarta and its structure and architecture was modelled after that of the United Provinces, especially Amsterdam, where the first traders had hailed from in 1595. In addition to this, the actual print of Batavia is particularly interesting as the version on the map looks quite similar to that of an earlier image produced by Clement de Jonghe for his 1679 map of Batavia. A possible reason for this similarity is that his work was very popular and widely imitated due to the accurate nature of his cityscapes. However, what is interesting to note about the ‘Chimney Map’ as a whole, is that both the map itself and the cities depicted in the border are outdated for the time it was produced. This reflects a wider practice by cartographers of reproducing inaccurate maps from old copper plates.  It is possible therefore, that the depiction of Batavia on the map was outdated by 1690, as it seems to have failed to note the shifting of slaves to the south of the city. However, the inclusion of this particular city does highlight the breadth of the Dutch Empire and demonstrates how international the United Provinces was during this period. The churches are among the most significant features of the ‘Chimney Map’ because they are unique to this particular version unlike other shared attributes to the Rotterdam Map. Furthermore, the churches with their Dutch style and names more closely emphasise the Netherlandish connection this map is so well placed to shed light on. The church images also provide interesting insight about the question of proprietary elements of the map. Whereas with other portions there is reason to suspect that the copper etchings were borrowed, bought or copied from other mapmakers, particularly in the instance of the city maps which show an informed depiction of several cities that a Dutch mapmaker would have been ill-informed to create without pre-existing visuals, in this instance reverse image searching the more intact images revealed no other instances of these images being used. When the churches themselves were compared with other images of Dutch churches, no exact matches were found. Even the churches where the labels were legible did not correspond with the real churches that bore the same name.

The Oosterkerk, for example, is a real church that was completed around 1671, before the creation of the map, and still exists today. This church is not easily discernible on the map. Although the label is legible the church is mostly out of the frame. However, the buildings surrounding the church are visible and do not correspond to buildings that exist now near to the Oosterkerk. There is also a church labeled, ‘Nieuwe Kerk’ on the map. The Nieuwe Kerk is a 15th century church which is also still standing. However, with its straight lines and arched windows it bears no resemblance to the domed building behind the caption on the map.

Amsterdam’s Oude Kerk is labeled on the map as well, and would have been a feature of the city by the 1690s, when the map was made, after its construction finished in 1213. However, again, the square image on the map appears to be more of an approximation or guess of the real church.

Though many images were consulted and visual features of the churches at times resembled some real ones, none of the churches seemed to be copied in detail from real life, though the artist likely had some familiarity with the names of contemporary Dutch Kirks and Dutch architecture. This could suggest a number of things, but I think one likely conclusion to draw from this is that the map was not sold to someone who was expected to be able to travel to the United Provinces. From the English dominating the map and the portrait in the middle it can be concluded that this map was intended for an English-speaking audience under the rule of the crown, however, the inability of the map’s consumer to corroborate the map’s illustration may speak to the limits of the cultural exchange.

Some of the churches shown on the map