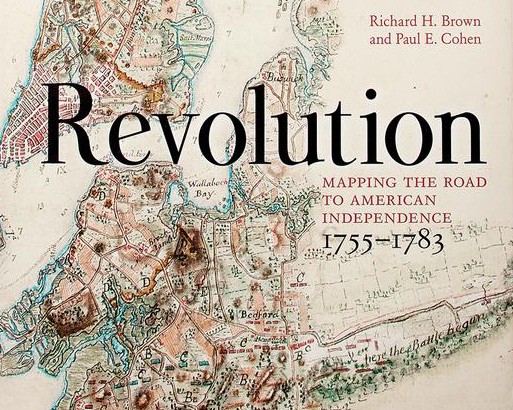 At the National Library of Scotland’s Maps Reading Room we are often asked to provide maps for all manner of media. From pamphlets produced by a local church, through books and exhibitions, to major motion pictures. So a request to use Paul Sandby’s ‘Plan of Castle Tyrim’ in a book did not raise many eyebrows. However, when the authors of ‘Revolution: Mapping the Road to American Independence 1755-1783’, Richard H. Brown and Paul E. Cohen, kindly gifted the Library a copy the Maps Reading Room staff were mightily impressed. The front cover of Revolution: Mapping the Road to American Independence 1775-1783, showing a detail of A Plan of New York Island, and part of Long island, and the circumjacent country, by Charles Blaskowitz, 1777

The authors use a wonderful array of resources (mostly, but not solely, maps) to provide a colourful visual accompaniment to their written history. Some depicted plans of towns and attacks, whilst others, such as the one below, were created to track the locations of British troops. Cantonment of His Majesty’s forces in N. America by Dan Paterson. Copyright: Geography and Map Division, Library of Congress

And then we come to the National Library of Scotland’s contribution to this wonderful book – Paul Sandby’s ‘Plan of Castle Tyrim’. Sandby was a mapmaker and painter (most especially a water-colourist), and, strangely, given he has a map in a book about the American Revolution, he never stepped foot in America. But many of the maps created at this time were by those who studied under Sandby at the Royal Military Academy at Woolwich, where he served as Drawing Master. Many of the styles used can be directly traced back to Sandby. You can find more of Sandby’s work on the National Library of Scotland’s maps website.