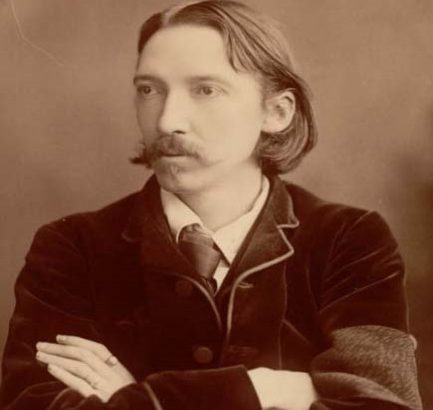 “A mountain valley has, at the best, a certain prison-like effect on the imagination, but a mountain valley, an Alpine winter, and an invalid’s weakness make up among them a prison of the most effective kind”.

December 3, 2019 marks the 125th anniversary of the death of Robert Louis Stevenson (1850-1894). As a memorial, the National Library of Scotland has mounted a display which will run until January 2020 featuring his association with Switzerland.

Stevenson and his family spent the winters of 1880/81 and 1881/82 in the alpine town of Davos in southeastern Switzerland. Although Davos was chosen so that Stevenson could convalesce in the fresh mountain air, his time there was extraordinarily productive. Most importantly, it was during his first Davos winter in 1881 that he was able to complete the last 14 chapters of Treasure Island. He was so inspired that he finished the novel in less than two weeks and described writing a chapter a day as like having an “easy conversation”. It is amazing to consider that Treasure Island was completed not in a warm and sunny location, such as the West Indian setting of the story, but in winter at an elevation of 5,000 feet in the Swiss Alps.

In addition to his serious literary activities, Stevenson spent a great deal of time in Davos with his stepson Lloyd Osbourne (1868-1947) writing simple verses, carving woodcuts, and hand-typesetting, printing, folding and assembling little chapbooks and broadsides. These were then printed on Lloyd’s miniature “hobby press“. The National Library of Scotland is fortunate to own a collection of works from that press.

Moral Emblems: a Collection of Cuts and Verses (Davos: Stevenson and Osbourne, 1882) was published in both a first and second collection. Our copy of the second collection is a presentation copy from Stevenson with the manuscript inscription “S.E.P. from R.L.S.” at the head of the title page.

The tiny pamphlet Not I, and Other Poems (Davos: Stevenson and Osbourne, 1881) is among the rarest of all Stevenson’s works with a total of only fifty copies being produced. The final page has an amusing colophon: The author and the printer, / With various kinds of skill, / Concocted it in winter / At Davos on the hill. / They burned the nightly taper / But now the work is ripe / Observe the costly paper, / Remark the perfect type!

The broadside below advertises one of Lloyd Osbourne’s stories about the Wild West although it was almost certainly written in part, if not entirely, by Stevenson himself. Stevenson was also responsible for the effusive press notices and remarks at the bottom of the sheet.

Below are two broadsides advertising the first and second collections of Stevenson’s Moral emblems. Stevenson’s woodcut on the first broadside depicts Hernán Cortés’s first viewing of the Pacific Ocean.

The broadside advertising the second collection features the heraldic shield, with lion rampant, of the royal arms of Scotland.

Stevenson’s woodcut on the opening depicts the joyous discovery of a marguerite daisy, a play on his mother’s name. The single line of poetry on the facing page, “Lawks! What a beautiful flower!!”, is attributed to “T. S.”, the writer’s father (and also pioneering lighthouse designer) Thomas Stevenson (1818-1887). R. L. Stevenson claimed that this was the only line of poetry his father ever wrote.