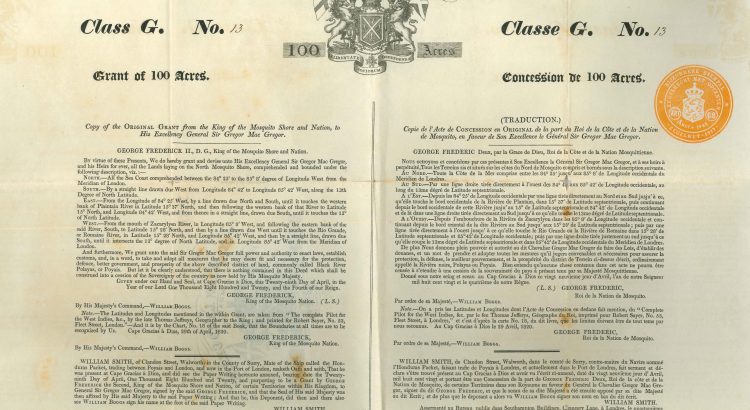 We have recently bought a printed document linked to one of the boldest con men of all time, Gregor MacGregor (1786-1845). Other fraudsters may have made more money but MacGregor was breathtakingly audacious; he invented a country that didn’t exist, and then persuaded hundreds of investors to buy the bonds of a non-existent government and even to emigrate to the fictional country.

The document in question is a ‘Poyaisian’ land grant of 100 acres, signed by Gregor MacGregor in 1834. The single sheet looks impressive but it was completely worthless. It marks the final chapter in the colourful, convoluted career of MacGregor.

He was born in Glengyle near Loch Katrine, a descendant of Rob Roy. Little is known of his early years, and much of what MacGregor would later reveal of his past was probably invented. As a 16-year-old he joined the army and later served as a captain in the Peninsular War. In 1811, the self-styled ‘Sir’ Gregor MacGregor sailed to Venezuela to take part in the war for independence against Spain. He became a colonel in Simon Bolivar’s army and even married a relative of Bolivar’s. MacGregor later took part in some ill-fated expeditions against the Spanish in Florida and Central America; each ended with him abandoning the British mercenaries under his command.

By 1820 he had decided that the life of a soldier of fortune was no longer for him. He sailed for the Mosquito (Miskito) Coast in what is now the Caribbean coastal area of Honduras and Nicaragua, a region which was then under British protection. He managed to persuade the local Mosquito king into giving him a grant of land, offering rum and jewellery in exchange. The following year MacGregor showed up in London, claiming to have been appointed the ‘Cazique’ or prince of a land he called ‘Poyais’ which had 12,500 square miles rich in natural resources but was in need of development. He launched a slick PR campaign to attract cash and settlers to the territory, with interviews in the national papers, a book (supposedly written by one ‘Thomas Strangeways’, but almost certainly by MacGregor himself), and promises of friendly natives, a mild climate, fertile soil, and forests full of valuable timber.

Hundreds of investors in Britain, eager to speculate in the Cazique of Poyais’ grand project, bought supposed government bonds and land certificates. MacGregor targeted his fellow Scots as potential settlers, claiming that they had the skills and toughness to develop the new land, and that Poyais was a chance for them to atone for the disaster of the Darien settlement of the 1690s. About 250 people emigrated to the fictional country in 1822 and 1823, only to find an untouched rainforest with no infrastructure; more than half of them died of disease, hunger and exhaustion.

MacGregor had prudently slipped away to France before the first survivors returned to Britain and continued to flog his Poyaisian project to French and Spanish investors. His luck seemed to have finally run out in 1825 when the French authorities arrested him for fraud and put him on trial. However, he was acquitted of all charges and moved back to Britain in 1826. The uproar surrounding the failed Poyais settlement of 1823 had died down and there were still gullible people willing to invest in his invented country. He began once more to sell land grants and government bonds, this time on a more modest scale, even though his grant of land had long since been revoked by the Mosquito king.

In 1834 MacGregor moved to Edinburgh, perhaps to escape impatient London investors, and continued to make sales of land grants but the public had now lost interest in Poyais. In 1838, almost penniless and recently widowed, he returned to Venezuela and successfully applied for citizenship and restoration to his former rank in the Venezuelan army, with back pay and a pension. He died in Caracas in 1845 and was buried with full military honours in the city’s cathedral. It is astonishing to think that MacGregor, a serial fantasist who was responsible for the deaths of over 150 people and who conned investors out of thousands of pounds, was never punished for his crimes. His success proves the adage that there is “one born every minute”.