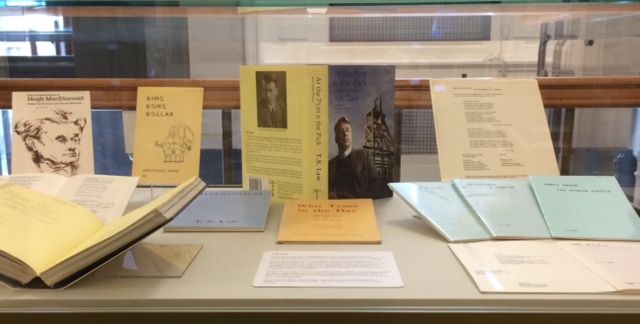 Thomas Sturdy Law (1916-1997), a committed and powerful poet in the Scots language, was born in Lanarkshire one hundred years ago on Hallowe’en. Our current display in the main hall of our George IV Bridge building in Edinburgh notes the centenary of his birth, drawing on our extensive manuscript and published collections.

Born into a working class mining family in Newarthill, Law left school at fourteen and was apprenticed as an engineering fitter. His earliest poems survive from his time in the Royal Air Force during World War Two. In 1948 Hugh MacDiarmid, by now a friend and correspondent, was impressed enough to write the foreword for the first collection by Law, now a Fife miner. In 1952 Douglas Young, the poet and activist, described Law as “a very wide-awake and highly competent skilled man working in the coalfields of the Lowlands.” He proved to be all that and more. Active in the anti-nuclear movement of the 1960s, co-writing protest songs, in the 1970s he co-edited collections on John Maclean and by Hugh MacDiarmid. His poetry appeared frequently in various journals and magazines, and he published his own collections in a series of pamphlets.

Law died in 1997, and his life and work were celebrated in a collection published in 2008 – At the pynt o the pick and other poems.

Our display, which will be running throughout October, features many of Law’s published works, notebooks, and original letters from Norman MacCaig and Sydney Goodsir Smith. Law’s archive is held here.

Find out more at  the Scottish Poetry Library’s listing  on T.S. Law