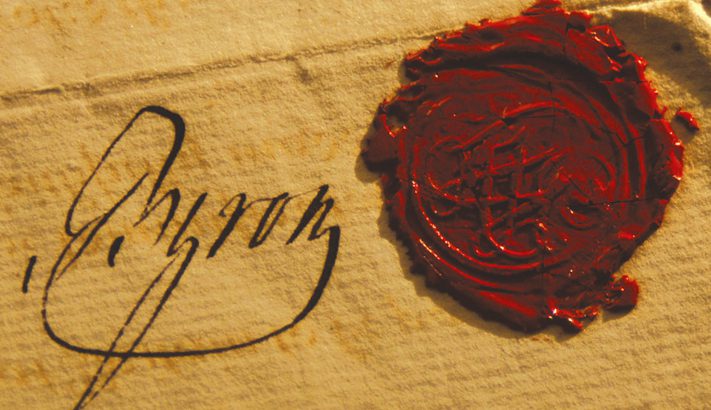 Although there are many fascinating stories and events depicted in the content of letters, legal documents, ledgers and manuscripts, sometimes the physical nature of the record will enlighten readers about the origin of the document, its use, or give clues to or about the author. So, it can be interesting to take a closer look at some of the physical aspects of records.

The above image shows the seal and signature of the poet Lord Byron, on a document in the John Murray Archive (an archive relating to the publishing house of John Murray, which produced books from its foundation in 1768 until the business was sold in 2002).

Seals were used to keep letters private before envelopes became commonplace.  The red sealing wax adds a splash of colour to any letter, but it was also used to convey something about the writer.  Often the seal of a person would bear a family coat of arms, motto, portrait or other image of significance.

Another visually interesting record from the Byron papers of the JMA, is his manuscript for the third canto of ‘Childe Harold’s Pilgrimage’.

The rushed handwriting and constant revision of the lines as the poet hones his work, tells their own story of Byron’s creative process.

The physical nature of this letter of Sir Charles Fellows tells us something of the writer.  Sir Charles Fellows was a traveller and archaeologist.  In 1840, he was in Lycia in modern day Turkey.  A letter from this time to his publisher, shows a number of deliberate cuts.

These intentional cuts are actually quarantine slashes. Their presence on this letter are physical evidence of his travels.

Given the sheer volume of 19th century letters in the John Murray Archive, it is perhaps unsurprising that at least one of those would showcase the most famous of all stamps – the Penny Black.

The Penny Black was the first adhesive postage stamp and was in use from May 1840 until February 1841.  The introduction of stamps simplified postage costs.   The Penny Black was replaced for security reasons – the red cancellation stamp (seen in the image above) was not very visible on the black stamp and could be removed and the stamp then reused.  To try to stop this, the Treasury reversed the colours, so the Penny Red was introduced and stamped with a black cancellation stamp. This means that any letter bearing a Penny Black can be easily dated to within a relatively short time frame.

A more common find are letters that are ‘crosshatched’.  This is where the writer has written their letter in one direction on the paper, turned the paper 90 degrees and then continued their correspondence over the top.

This was usually done simply to save paper.  The above letter was written in 1820.  At this time, paper was very expensive because it was made from pulp from rags, rather than wood pulp.  As such, people tended to be careful about their paper usage and writing letters in this way helped to reduce the cost. Although it can look confusing, the text is reasonably legible once you get used to it!

When using letters and manuscripts, it is very common for the people to become fascinated with the contents and what the author was trying to convey.  However, the physical nature of the records can be of interest too and can be looked at in order to give a fuller picture of its history.