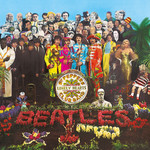 The Beatles’ Sgt. Pepper’s Lonely Hearts Club Band was released in the UK on May 26, 1967. It remains the third best selling album in the UK: only Queen’s Greatest Hits (1981) and Abba’s Gold: Greatest Hits (1992)  have outsold it. To mark this anniversary, the National Library of Scotland has mounted a free display of the vinyl album and a selection of Sgt. Pepper-related books from our collections at the entrance of the Library’s building on George IV Bridge. The album still generates strong opinions: was it a musical masterpiece whose songs were the first by a rock/pop band to be structured around a unified theme, or was it just a collection of unconnected (mostly brilliant) songs burdened by the pretentious idea of a band within a band? Did it represent the peak of the Beatles’ creativity or was it the first indication of the fragmentation of the group?

The Sgt. Pepper cover has generated as much critical debate as the songs. Pop artist Peter Blake’s now iconic collage of 57 photographs and nine waxworks of diverse cultural personalities was considered enormously expensive at the time costing around £3,000 instead of the typical £50.00. However, it would go on to win a Grammy Award for the best album cover of 1967. The album also marked the first time lyrics were printed on the back cover instead of informative/promotional sleeve notes provided by the record company. This practice quickly became commonplace.

It was McCartney’s idea that the Beatles record an album under another guise so as to give themselves the freedom to experiment musically. A sense of large-scale musical structure is intimated by the reprise of the initial Sgt. Pepper ‘s Band song (in a different rhythm and tempo), near the end of side two. In addition, the listener experiences the album as a unified live performance because it was the first pop album to be mastered without the usual momentary gaps placed between tracks: through cross-fading, the songs just seem to flow and blend into one another.

However, some critics have claimed that in spite of the inspired songwriting, they can discern little or no melodic or harmonic continuity between the songs. In later interviews John Lennon agreed:  “Sgt. Pepper is called the first concept album, but it doesn’t go anywhere … it works because we said it worked”. He was especially adamant that his contributions to the LP had nothing to do with the Sgt. Pepper concept.

Although Revolver, the Beatles preceding album, was arguably an overall better collection of songs, Sgt. Pepper’s status as one of the most influential albums in popular music history is undisputed. Its vision of the album as a serious work of art in which sleeve design, costumes and inter-related songs all work together under a unified idea, or concept, would greatly influence bands in the succeeding decades, especially progressive rock groups such as Genesis, Yes, Pink Floyd and Emerson, Lake & Palmer.

In addition, Sgt. Pepper would mark the rise of the producer as an equal partner to the musicians in the recording studio. The contribution of George Martin during the recording of the album was immense. Under his direction, the studio became not so much a place to record live performances, but a compositional tool where vocal, instrumental and orchestral overdubs, complex arrangements and tape manipulation, were able to transform and enhance songs initially conceived for just voices drums and guitars.

We hold many books on the Beatles. Here are the Sgt. Pepper associated titles featured in the display: