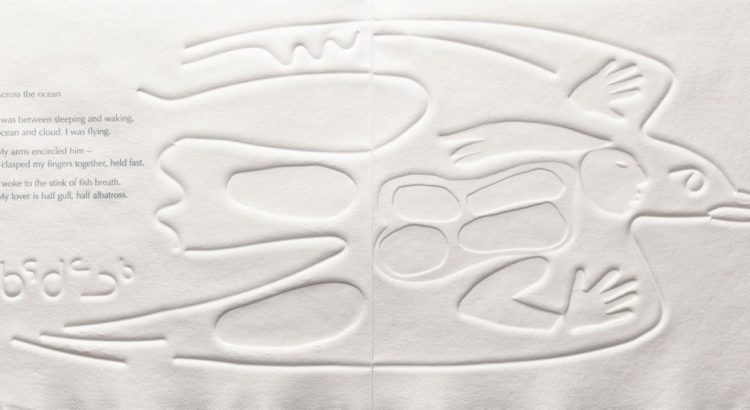 Fitting for wintry January days is this sculptural work of art, new to the National Library’s Artists Books collection. Sedna and the Fulmar is one of forty signed, limited-editions by artist Ron King at Circle Press in collaboration with Scottish poet Richard Price. The artist’s book recreates the story of the young woman Sedna who, deceived by her lover and then father, is transformed to a sea goddess now central to Inuit cultural belief. Both artist and poet evoke the darkly violent tale in a series of subtle yet distinctive images accompanied by written verse. King has used the printmaking technique of blind embossing to create bold lines and shadows on folded sheets of handmade paper, completely white except for the pale blue letterpress of Price’s poetry. The words set a rhythm to the embossed Inuktitut script native to Canada, where the artist spent a few formative years of his career and first learned of the myth. Presented in a solid, square blue box with eagle motif, the three-dimensional nature of the book is accentuated further by layers of embossed images on textured paper, delicately weighted like snow.

Artist’s books are typically known for their gleeful disregard of printmaking conventions and for pushing boundaries through experiments with book form and content. An artist’s book is a work in its own right with the artist considerate of everything involved in the reading experience. With Sedna and the Fulmar, King has taken care in his choice of form, materials, and techniques which all work to deconstruct the reading process and foreground the book as a material object. There are similarities to another of King’s smaller-scale and popular works, Turn Over Darling (1990), a series of double-sided, blind embossed prints that playfully requires the reader’s sequential turning of the page for the reclining nudes to change position, from front to back. The beguiling nature of both artists’ books lies in their dependency on the haptic: the reader interacts, and so perceives the book through the touch of their hands on the pages. In this process, King is perhaps suggesting that we as readers are inextricably fundamental to the reading experience. For the short moments that we interact with the book, the object in our hands comes to life and is perhaps more difficult to distinguish as a separate entity from ourselves. This sensuous interpretation privileges the senses of touch and sound over sight and encourages us to consider the energy that is released when we encounter books at a unique point in time. Whereas King describes Turn Over Darling as a series of ‘sketches’, there is undoubtedly more substance to the strong, structural form taken by Sedna and the Fulmar and its inclusion of Richard Price’s poetry. King is a prolific collaborator with artists, writers and poets and the pair previously co-created Gift horse (1999) and Going, going – gone! (2013) on Circle Press. Price’s interests in digital technology and the emergent information society in the 1990s as an Informationist Poet, combined with his musical pursuits as a lyricist, may have appealed to King’s literary imagination. Were it not for Price’s words, the book would remain silent. Yet song is central to the story of Sedna, as well as Inuit culture more broadly. Not only do the book’s white pages give the impression of an Arctic landscape, the purity of white is suggestive of an expansive and mute world. Through Sedna and the Fulmar it is as though, in increasingly distracting and noisy times, King wishes to recompose our focus on the simplistic beauty to be found in the folk tales and traditions of the indigenous Canadian Inuit that preserve the community’s traditions and culture. Likewise, as a highly-experienced, artist-craftsman with interdisciplinary talents as a painter, sculptor and printmaker, King could be channeling an inner anxiety for the erasing of fine craftsmanship. Just as the Inuit subsist on the land using the knowledge passed down from their ancestors, so too, King carves out his manifesto for the survival of printmaking techniques through his beautifully rendered images. Undoubtedly a celebration of the Inuit; the book may also be paying tribute to the line drawings of Henri Matisse and the engravings of industrial-age engravers such as Eric Gill. The book’s simplicity echoes the invisibility of the artist’s book as an object and its relationship to the reader. Perhaps King’s greatest achievement in this work, and in his collected body of works, is how he points the way to a better appreciation of what the book is as a technology and our relationship to it. If we take enough time to pause and appreciate the thinking, imagery and material qualities of his latest and most beautiful pieces, we might benefit from what the book may reveal to us about ourselves. It is through this means that the mysteriously white and lyrical Sedna and the Fulmar may actually be expressing to us the importance and persistence of books as cultural artefacts.

The National Library has comprehensive holdings for works by Ron King (b. 1932) and Richard Price (b. 1966) on the main catalogue. Search the catalogue for Cooking the Books, the publication produced for a 2002 retrospective exhibition of Circle Press at the Yale Center for British Art, celebrating seventy years of King’s life and work. There is more about the Library’s Artist’s books collection on the website and information on artist’s books as well as a directory of local collections can be found on the Scottish Visual Art Group’s online resource guide.

The images above are reproduced from Ron King’s Issuu website with the kind permission of the artist. Several other of Ron King’s artist’s books can also be viewed on Issuu including Turn Over Darling and Going, going – gone!